Some of you disagreed with my musings on Alan Jones recently. Some of you agreed with me. None of you demanded that XYZ be stricken from existence for having the audacity to publish something that you didn’t agree with personally. I don’t find much that I can see eye to eye with the Huffington Post on, but I would never in a million years advocate geo-blocking their site or shutting it down, much as I would hope that a freelancer at The Huffington Post would never advocate shutting down Breitbart, or XYZ for that matter.
I’m sure that none of you would either. Many of us have issues with our ABC. Largely that it is unrepresentative, and is very much THEIR ABC. But that’s mainly because we’re footing the bill for it. I’d be a lot more comfortable with Tony Jones’ Cultural Marxist love-in every Monday night, and no conservative programming over at Aunty whatsoever, if the network were privatised and forced by the free market to either prosper in its current business model (unlikely) or come up with programming that appeals to more than 3% of the population. 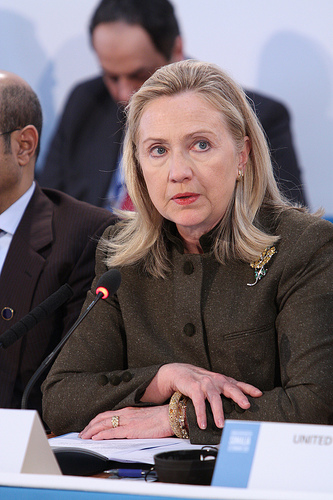 campaign is less on board with this whole free press concept as The Daily Caller reported after seeing an email that was leaked, presumably by one of their supporters who found it disturbing as they should.

“We’ve had a conservative media in this country for a while,” says the email, sent Thursday and signed by deputy communications director Christina Reynolds. “I don’t always like what they have to say, but I respect their role and their right to exist. Breitbart is something different,” she says. “They make Fox News look like a Democratic Party pamphlet. They’re a different breed altogether — not just conservative but radical, bigoted, anti-Muslim, anti-Semitic conspiracy peddlers who never have been and never should be anywhere near the levers of power in this country.”

This is concerning. But it gets even more concerning. Christina Reynolds has not only named Brietbart and other conservative news sites, but has also named Huffington Post as another potential target for the Clinton Presidency hit list. Why Huff Po? You ask. Aren’t they very much Team Clinton? Well, yes and no. Huff Po went rogue recently with a front page exposé about the nefarious activities of the Clinton Foundation. Perhaps they reasoned that they should balance the 375 thousand Trump hit pieces with a single negative Hillary article that they could cite to feign impartiality. Or perhaps they had a refreshing moment of clarity.

Whatever the case, the Clinton camp seems determined to silence any media organisation that isn’t 110% on board #withher. Even a disclaimer beneath every Trump article isn’t going to be enough to save the Huffington Post from suffering the same fate as Brietbart and others who refuse to toe the party line. Regressive leftists are the same as white supremacists; they find an excuse to persecute everybody in the end.

The Huffington Post are about to learn what transgressive individuals from minority groups have known for some time. They have only ever been conditional allies. Useful idiots as long as they stay on the Cultural Marxist intellectual plantation. All seems fine until they attempt to stray off it and are eliminated with extreme prejudice.

At its heart, this is why we need to be so wary of hate speech legislation like 18c. Sure, reasonable discussion is protected under the 18d amendment. But this is only valid depending on who decides what constitutes being reasonable. Most of us would agree that seeing a link between Islam and terrorism is reasonable. The current leader of the free world does not. Breitbart doesn’t get into phrenology, or white supremacy, or anything of the sort. But in the warped worldview of the Clinton campaign, their investigative journalism (and that of Huff Po) constitutes abuse and hate speech.

We all know how this is going to play if Clinton becomes President. She won’t just shut down media that doesn’t tow the party line carte blanche. That would be too transparent, and would even outrage those on the left. To achieve the same ends, a conservative President would come out looking a lot more tyrannical. Erdogan has neutralised his media opposition virtually overnight, but it has come at a cost. The people of Turkey are under no illusions as to what has happened to their media or their fearless leader’s true colours.
A Clinton Presidency media purge will be a lot more subtle. It won’t be seen as media censorship or an alt-media witch hunt in any way, shape, or form. It will be framed as rallying against hate speech. Breitbart will be quietly targeted for their investigative journalism focused on the Clinton campaign, but openly convicted on charges of racism, sexism, or transphobia in a grandiose show trial. It’s the perfect Orwellian crime. Suppression framed as progressivism. The U.S. is a beacon of democracy, so the implications for Western media are enormous.

U.S. Media needs to recognise this as a watershed moment in freedom of the press. They can compare Trump to Hitler all they like, yet do so at peril of becoming slowly boiling frogs in a beaker above a Bunsen burner. It will be interesting to see whether a sense of self-preservation trumps their loathing of the Donald, or if they choose to follow the architects of dismantling the free press off the edge of the cliff like so many lemmings.

Photo by Foreign and Commonwealth Office