After feeding sheep pellets laced with 5 per cent polyunsaturated oils, like rice bran and canola oil, they discovered these oils transferred into the meat (infusing it with omega-3 fatty acids and reducing saturated fats).

As sheep do not have naturally occurring omega-3 oils in their meat, and lamb is a prime dish of choice for Australians, this discovery holds great promise.

However I wonder if there aren’t cheaper ways to procure high quality feed rich in omega-3 fatty oils than producing pellets. 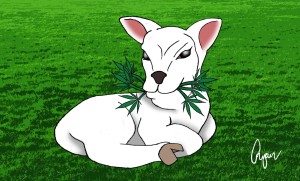 Traditionally speaking, farmers would’ve been likely to use feed that had been cultivated alongside the livestock in question. One long trialled crop which had been destined for this country, at the approval of a then 1786 Tory British cabinet, was hemp (with seeds first arriving aboard the First Fleet in 1788).

Approximately 73% of the energy in hemp seeds is in the form of fats and essential fatty acids, mainly polyunsaturated fatty acids, linoleic, oleic and alpha-linolenic acids.