Labor and the Greens are renewing their vows, to stand by their career protesting love children and scheme to undermine freedom of religion, association, conscience and speech. 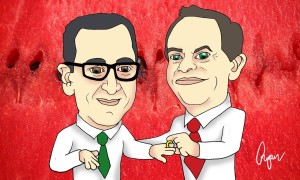 ese two wandered onto the government benches, whistling The Internationale all the way through, we were reminded as to what the watermelons regime offer us.

It was a regime where Stephen Conroy tried to censor the free media and Australian youth were indoctrinated with a shoddy black arm-band national school curriculum.

It was a regime where private property rights were attacked with plain packaging laws and costly unscientific taxes were implemented on carbon dioxide and mining.

It was a regime who massively damaged trade relations with a live cattle export ban and caused an expensively obstinate hole with the National Broadband Network (NBN).

It was a regime where Attorney General Nicola Roxon attempted to fortify legislation in order to criminalise speech which might cause offence while then appointed Prime Minister Julia Gillard berated Tony Abbott (then opposition leader) with her misogyny tirade.

Hopefully when the vows are concluded with “death do us part” enough voters are wise enough to direct watermelon policies to the cemetery.