I have a confession to make, dear reader.

It’s difficult to admit, and will get me thrown out of certain circles. But my guilt-soaked Catholic genes are calling me to confession. So here goes.

Some of my favourite white people are brown.

Like Twitter’s BASED ASIANS who share our high-IQ contempt for the prehistoric hordes the globalists are shipping in to replace us.

As a conservationist about both human cultures and forests, I opposed untrammelled #globalization by the end of primary school.

Or the WOKE AF YouTube non-whites calling out cultural Marxism and demographic warfare against white civilisation.

Or the DAD BRUTHAS calling on American black men to give up on the victim mentality, stop blaming whites, get a haircut, get a job and raise their kids.

All three of those men are fellow travellers with anyone working to raise the banners of the West against the hordes being summoned against us. When this war turns hot and hellfire and sulphur fill the air, I’ll be happy to man the trenches next to such brown and yellow NAXALT allies.

How did our enemies become so powerful?

What weapons do our enemies use?

And who exactly are our enemies?

Answering these questions correctly will be vital for those of us defending Western civilisation against the onslaught of hate, propaganda and demographic warfare we are experiencing. My answers to those questions have created my view that, no matter how much you dream of a white Christmas, we’re going to have to create a NAXALT intersectionality if we’re going to win.

Our enemies became powerful because they realised how weak they were and started from that understanding. They knew that Central European Marxist ideology wasn’t going to work in the postwar West with its material abundance, euphoric optimism and residual Christian culture. They realised that resentment, the weapon which had brought down the Tsars, wasn’t going to overthrow the parliaments. So they decided to use guilt instead.

They also realised that, in societies as rich as our postwar Western ones, class warfare wasn’t going to destroy the social fabric and bring about the totalitarian dictatorship. So they turned to race war, gender war, culture war and the destruction of childhood innocence instead. And it worked.

Who our enemies are is a crucial point. They are not the immigrants, or the refugees, or the women, or the gays, or the Jews or any other group of people who have been turned against white men by cultural Marxism. Those people are tools, and often fools; but they are not our enemies. Our enemies are those people who maintain toxic, anti-Christian and fundamentally anti-Australian ideological or religious beliefs. Chief among these is Marxism, as well as Salafist forms of Islam and other supremacist religious belief systems.

Any foreigner who has come here also to change the country and remake it in their image, consciously or not, is also an enemy. These people must be made to either accept and adopt the white, Western culture of Australia our forefathers created, or go home.

The deep state wants the defenders of Western civilisation to get swastika tattoos, dress up in uniforms, do Roman salutes and be Antifa’s punching bag for the cameras in unfair street brawls set up by a hostile police state. They want us obsessed with ideological and racial purity and acting out the Hollywood neo-Nazi stereotype.

And it really helps our enemies when you set up faux-military role-playing clubs led by beer-bellied wife-beaters who sleep with their mother-in-law.

“SPLC has won. Matt Parrott is out of the game. Y’all have a nice life.” https://t.co/n0gWbxELB6

When the communists realised the revolution wasn’t going to spread to the capitalist, Christian West, they evolved. They got rid of people married to defunct ideas and changed strategy from class war to race war. That’s the war we’re in now.

We cannot defend ourselves in this war on whites if we keep associating with defunct ideas and practices from the past. We must become an intersectional movement which accepts anyone who supports white culture and promotes white demographic majorities in Western countries. We must learn from our enemies.

Such talk is very triggering for alt-lite types still stuck in the mentality of universalism. In Kekistan, it can get you labelled a RIGHT-WING SJW!

Conservatives, classical liberals and those still in the alt-lite tent refuse to acknowledge the racial nature of the ideological, spiritual, cultural and demographic attacks Western people have been experiencing for the last 50 years. We never wanted a race war; unfortunately for us and for the rest of the world, when the cultural Marxists chose to deploy the dialectic of race for their revolutionary agenda, race war chose us.

This has been seized upon with savage glee by white-hating browns. Yassmin Whatever got media gigs and a huge public profile. Marcia Langton is feted by the fake intellectuals of the talking circuit, on a prof’s salary. Waleed got a talking head gig on Ten. Malala Yousafzai got to go to Oxford for getting shot in the head. Barack was president for eight years without getting shot in the head.

None of them got that loot primarily on merit. Had they been white, they would never have been catapulted to such lofty heights. People like them are warriors for the cause, and they are becoming more militant every day. The alt-lite’s dad Jordan Peterson got called a fascist and white neo-colonialist by Pankaj Mishra, an Indian intellectual who has had rewards rained upon his dusky head for taking down toxic whiteness. Peterson was not amused.

And you call me a fascist? You sanctimonious prick. If you were in my room at the moment, I'd slap you happily. https://t.co/sC3Lc9Hhlu

I know there are many whites who have also drunk the neo-Marxist Kool Aid and are also our enemies, but the racial overtone of anti-white hate coming from the brown careerists of the far left is more tribal. More vicious. They’re not just virtue-signalling. They mean it. 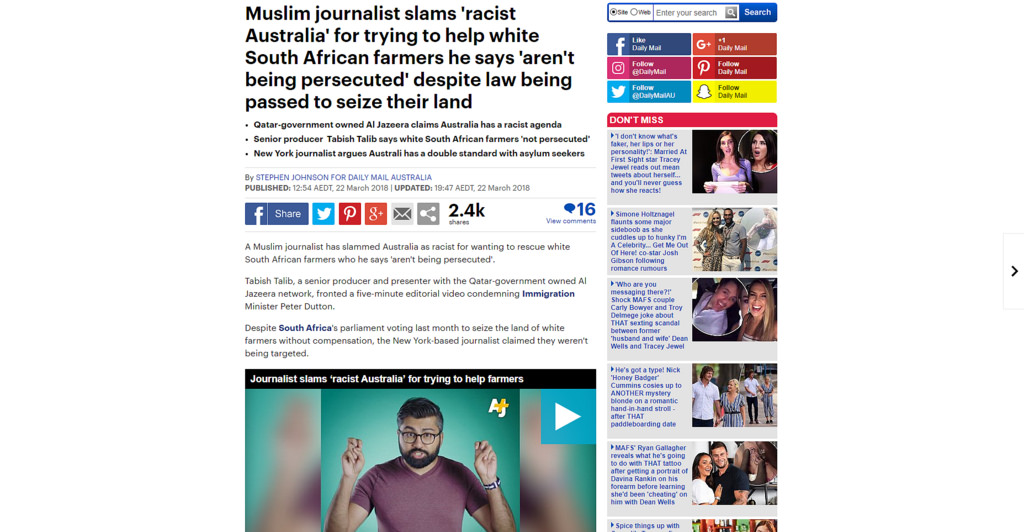 Why is this brown Al Jazeera editor so angry at Peter Dutton’s proposal to prioritise white South Africans for resettlement in Australia?

That does not mean, however, that our enemies are automatically those of other races. That’s what the Marxists want us to believe. It’s a shallow and short-sighted understanding of the problem.

The refugees, incompatible hordes and Chinese apartment-Australians who have been brought here by the neoliberal elite and the far left non-profit grievance complex are weapons in the hands of our enemies. You don’t fight weapons. You fight enemies. And our enemies are those who, brown and white, are filled with a zealous and cultish obsession with burning down our civilisation so that the diversity utopia staffed with people who look like them can rise from its ashes.

They’re nuts. Of course they’re nuts. But they’re also in charge, and that’s what makes them so horribly dangerous.

They are the campus radicals, the media talking heads, the Antifa shills who moonlight as writers for The Guardian and Fairfax and the PC authoritarians who have captured the public and private bureaucracies. These are the people who must be removed from power with extreme prejudice.

The globalist left have engineered a race war against white civilisation, and the only way we’re going to win the war is to first defeat them ideologically, then culturally, then institutionally, and finally, physically.

That is not going to be easy, and unfortunately there are too many people in this movement who think that just because Trump won the war is over. Or that if we just restore our individualism we’ll win against the SJW’s. Or that if we can preserve our ‘freedom’ we’ll be victorious.

You people are dangerously wrong.

On Australia Day this year, 25 000 white and brown zealots occupied central Melbourne and cheered while anarcho-communists with megaphones screamed “Fuck Australia! Hope it fucking burns to the ground!”

Think about that for a second.

Really think about it.

They were marching against white people, and the civilisation we built. That’s what they hate. That’s the war.

Whether you like it or not, alt-liters, this is the fight. What happened in Rhodesia, Detroit, Malmo, Luton and Marseille will happen in your town, your suburb, your street. That’s what the neo-Marxists have engineered.

You can hate this truth as much as you like, it’s still true. Stop pretending it won’t happen to you and start taking this fight seriously.

All I want for Christmas is the white-majority ethnostate. I don’t want it because I hate brown and yellow people. I know that we must fight for it because, for any civilisation to survive, the ethnic group which built it must retain a demographic majority. It’s an iron law of history. It’s just the way it is.

It’s a big country, and for the pro-white NAXALTs among us, there’s a place for you here too. You came here because you prefer the civilisation we Western Europeans built to your own. I suggest then you take up cudgels and join us in this fight. Because when the tsunami of human misery being brought in by Soros and his ilk overwhelms your neighbourhood, it’ll become a shithole too.

And who would want that? 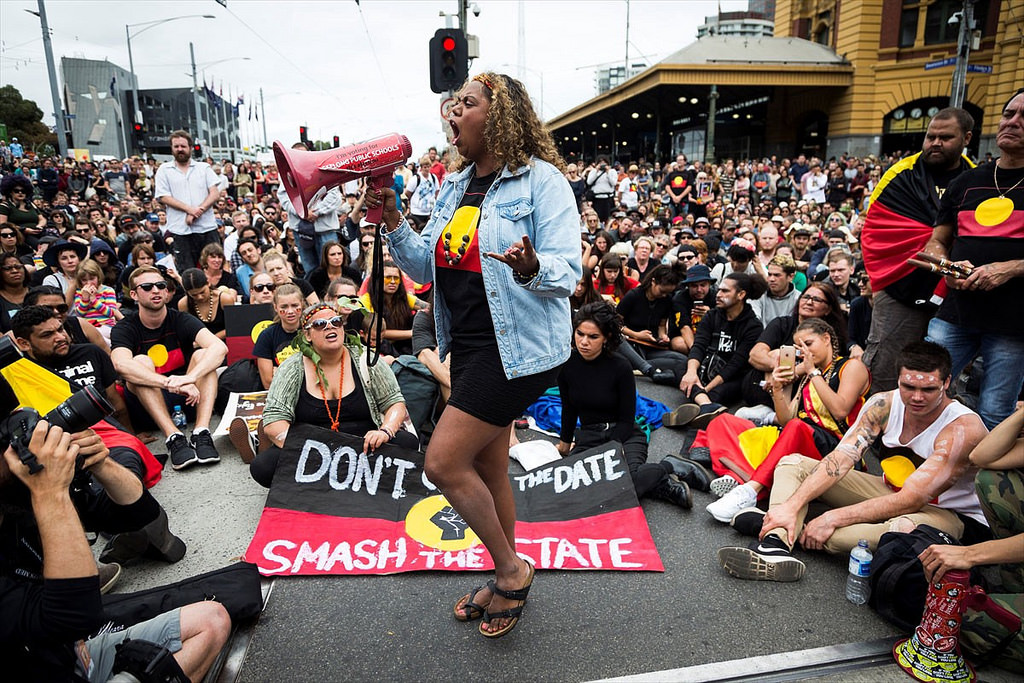