The following excerpt is taken from a recent talk given by Professor Jordan B. Peterson at a Vancouver based event sponsored by the very active University of British Columbia Free Speech Club. The title of the talk was ‘Identity politics and the Marxist lie of white privilege’.

“The Marxists, they’re not just wrong, they’re wrong and murderous (or wrong, murderous and genocidal, unless you think murderous and genocidal doesn’t mean wrong, and you can think that). There have been lots of would-be revolutionaries, who’d be happy to have blood running in the street, if they had their chance for revenge, at the opportunity to move up the hierarchy of tyranny.

“So you don’t have to think murder and genocide is wrong. Especially if the right people are murdered and genocided, right? That’s actually part of the whole equation. But, if you’re willing to think that murder and genocide on a mass scale across many cultures over many decades is wrong, then Marxism is wrong!

“It isn’t necessary for us, who are trying with the small part of our hearts that might be orientated towards good, to allow people who are manipulating us (with historical ignorance and philosophical sleight of hand) to render us so goddamn guilty about what our ancestors may or may not have done, that we allow our shame and our guilt to be used as tools to manipulate us into accepting a future we do not want to have.” 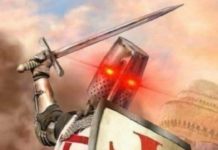 The White Man Will Never Die