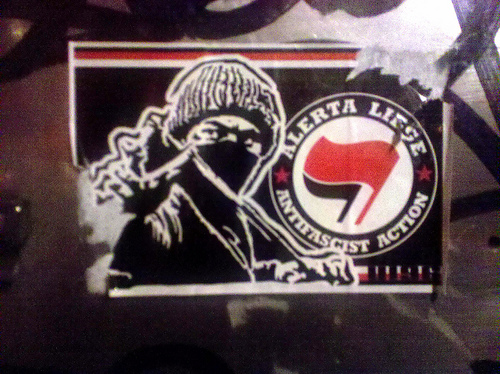 It has become clearly apparent to sane men and women over the past year that the left in the West have lost all connection with reality. The so-called ‘liberal’ media in America has even acknowledged that they now live in a ‘post-fact’ world. They lie and lie and lie and lie and lie and don’t even care that we all can prove they’re lying.

We know, though, that something really has snapped in the minds of leftists when thousands of snowflake SJW’s and ANTIFA cowards attack a venue in which a gay Jew who has a black boyfriend is giving a speech about free speech. Not content with just shutting down the talk, the black-masked thugs then riot, pepper-spraying women, starting fires, smashing shops and causing the speaker to be evacuated. Milo responded afterward in typical Milo fashion by posing on Instagram with a machine gun.

It is now clear that Trump has so triggered Western Marxists that they have become murderously unstable. They have collectively gone bat-s— insane. The only consolation for us men of the right is that, by the looks of their spaghetti arms, they don’t even lift.

Across the board, the leftist establishment are shutting down voices which challenge their ideological hegemony. Jay Dyer of Jay’s Analysis was kicked off Facebook for 24 hours for using the word ‘fag’ in a post eight years ago. Gavin McInnes was pepper-sprayed at NYU. Mike Cernovich was assaulted and Richard Spencer was sucker-punched on the street during the inauguration protests. Lauren Southern has had urine poured on her in the street. Many leaders of the emerging real right have experienced personal violence from anonymous, leftist cry-babies.

The neo-fascist ANTIFA cowards hiding behind their masks and taking pay checks from George Soros have made it clear: They want a war with the right. They should be careful. We do lift.

Like all totalitarian ideologies, including Islam, Western Marxism is comprised of a ‘moderate’ majority who provide intellectual and moral cover for a minority of vicious thugs who function as the attack dogs of the movement. The terrorists cow the society into accepting the demands of the so-called moderates. Not all Nazis were SA brownshirts, not all Muslims are jihadis and not all Western Marxists are ANTIFA. They pull in the same direction, though, and the ends they seek are the same. Only their methods differ.

The Bible tells us that a tree is known by its fruit: a good tree bears good fruit and a bad tree bears bad fruit. This is a good yardstick for evaluating a belief system. All forms of Islam and Marxism yield the same result: They bear bad fruit.

Media apologists for the ANTIFA thugs have used the argument that this type of leftist violence is new and represents a break with the peace-and-love free speech of the New Left campus movements of the late ’60s. Bulls—. In the late ’60s and throughout the ’70s and ’80s, campuses and schools across the West were held hostage by mass violence and intimidation by totalitarian control freaks bringing in their noxious mix of albophobia (hatred of whites), misandry (hatred of men), Christophobia and homosexual propaganda. Those thugs and their protégés have controlled higher education for 50 years; the rabid violence we are now witnessing against anyone on the right since Trump became President is part of a long tradition of violent suppression by the New Left Western Marxists. They have become so bold today because they have been getting away with it for over a half a century, and for the last eight have been shielded by their Community Organiser-In-Chief.

Make no mistake, white men of the West. Western Marxists want you gone. The more you stand up to misandry, white demographic displacement and leftist moral hypocrisy, the more ANTIFA will punch you in the face. They want you dead.

The so-called moderate left have the same aim; they are just less intellectually honest and usually not so hot-headed. You are a religious heretic to them, and are preventing the spontaneous emergence of the utopia of universal tolerance. Eradicating you is morally justified to them as it will help to bring forth the shining millennium of globalist diversity, peace and enlightenment. Imagine there’s no countries, it isn’t hard to do; nothing to kill or die for, and no religion too…

This is what ANTIFA are punching people in the face for. They are jihadis for social justice, and I suspect we have only just begun to see how violent Western Marxists will become when a formerly silent majority of right-thinking men and women say, ‘Enough!’

The real right are not fascists or National Socialists. As I have argued before, those are movements of the left, not the right. The real right are those who have not been infected with millennialist delusions of an earthly utopia if only we re-engineer society to create a New Man. In the thoroughly Marxist West we live in today, we are the ones who want our kids to grow up straight, who think Australia should remain predominantly white, who want to make sovereign decisions about what we do with our own lives and who just want the government control freaks to bugger off and leave us alone. Is that really too much to ask?

The real right has been on the retreat since at least the French Revolution. Reactionaries were never able to win over the lower orders of society, as they were too much associated with an aristocratic class that had lost moral legitimacy in the eyes of the people. The approach of conservatism also failed completely to arrest the steady forward march of the Marxists through the institutions and halls of power. Conservatism was never a movement; it was merely the consolidation of earlier leftist gains, a momentary pause in the inexorable progressivist momentum to re-engineer society.

By the time of Obama, the real right had almost disappeared entirely. Utopian delusion and decadent illusion are now everywhere. Plain speech has been criminalised, while the most degenerate of perversions are not only legalised, but mandated by the power of the State. In European galleries which once housed Rembrandt, we now have perverts who get government grants to mix body fluids and smear them on the wall. In houses of parliament which once echoed with great oratory, we now have duplicitous, scheming puppets who mouth platitudes to elicit shallow emotions in their hollow audiences. Meaning, purpose and grandeur are gone. It seemed the left had won history, and Marx cackled over the corpse of the Christian civilisation he and his fellow conspirators despised so much.

None of this degeneracy, this decay, was inevitable. It has been the result of bad ideas, bad beliefs and bad men. It can be changed, and the emerging right are united in their determination to fix what they see as the causes of this Western degeneracy.

As always, the real right which is now emerging has developed in response to the excesses of leftism. Such is the pendulum of history. It is premised upon a brutal realism: if the races are not equal and human biological diversity exists, then human biological diversity exists; if the genders are not equal and are biologically suited to different roles, then the genders are biological suited to different roles; if some men and some women are superior to other men and other women, they should rule them; if some religions are death cults, they should not be tolerated; if equality is a lie which has destroyed the foundations of civilisation, then we will say so and do what we can to destroy its tyrannical cult. If that hurts ANTIFA’s feelings, so be it. We have tolerated you for far too long, and it’s about time we put you down to ensure that this genocidal madness of modernity is ended once and for all and we can find a basis again for stability, human flourishing and all that enables the good fruits of civilisation. If we do not win then the narcissistic control freaks, in their self-loathing and lunacy, are going to get us all killed.