The Weekend Australian Magazine featured an interview today outlining “Why does Pat Oliphant now fear for the future of political cartooning?” in which it outlines:

Of greater concern to Oliphant is the rise of political correctness making it difficult to lampoon any person or institution without causing offence. He says political cartoonists cannot do their work freely if they live under the shadow of cancel culture. “It’s a problem,” he says. “In cartooning the idea is that if it is big, you hit it. There is a great deal of nastiness in good cartooning and you call it nastiness because you are not bowing down to please people. We are not here to please people, we are here to give people an idea and a thought and let them think of that. I just hope that we don’t bury the whole art of political cartooning [but] the trend is heading that way.”

This might explain why as of September 11, 2022 News Corp will no longer carry comic strips and panels in its papers.

Your XYZ is well aware of the impact political correctness has had on cartoonists like Bill Leak (may he rest in peace) who had faced investigation relating to 18C of the Federal Racial Discrimination Act. Leak had also faced formal kvetching from the Executive Council of Australian Jewry (ECAJ).

I’d particularly addressed 18C some 10-11 months prior to a counter-terrorism raid and arrest on myself relating to the Victorian Racial and Religious Tolerance Act 2001 (which shares identical exceptions outlined under 18D of the Federal Racial Discrimination Act) and an indictable charge of menacing.

A fellow cartoonist had foreseen my impending targeting for thoughtcrime some 9-months prior to my ban from Facebook when sharing this cartoon with me in March 2017 (you’ll notice I’m the target featured on the far-right of the cartoon, pun intended): 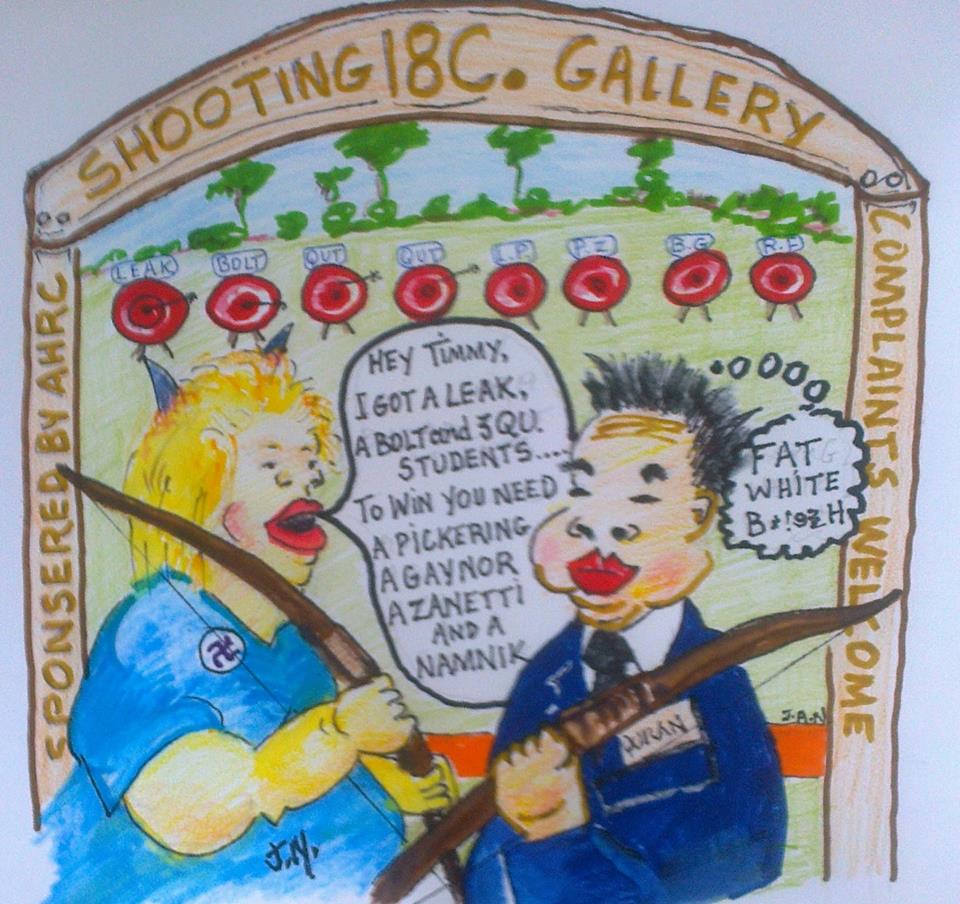 Thankfully I, like Bill Leak, had our investigations dropped (but not until after a protracted period of angst, frustration and harassment from certain self-identified “allies” of the ECAJ and ADC). Ironically enough an article I published here addressing the “security threat” of antisemitic cartooning was mirrored by a site in the Jewish community’s mitzvah milieu.

The incitement that my critics and enemies invoke is based on my unyielding nastiness in upholding hateful speech that is pivotal to a free society.

With Paul Zanetti having bowed out of cartooning in 2020, Carlos Latuff yet again being targeted by state suppression, Ben Garrison being banned for facts and the supremely based JinjerZilla having been doxxed, stalked and harassed by black bloc oxygen thieves, cartoonists the world over who are poking the proverbial eye of power are under threat.

Make of that what you may. When cartoonists are put in the crosshairs of governmental inquiries into radicalisation and extremism you know that the “tolerant” Marxist utopians clearly face some major problems.