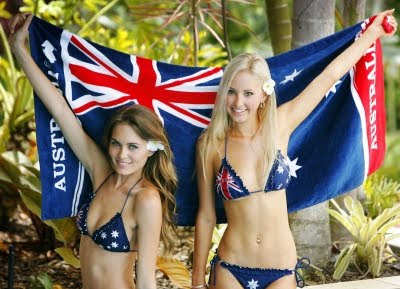 It will be great when Australia becomes an ethno-state again, similar to most non-white countries like China, Japan, India, Israel, Nigeria etc. We will be able to critique our own people. Instead of spending all our time defending ourselves against anti-white attacks we could be trying to help our people to become the best they can be.

I hate Australia Day. It’s the time of the year when all the drunken yobbos play cricket on the street shirtless and with there arse crack showing. Can someone tell these people that being a drunken obnoxious tosser is not unique to Australia so its nothing to celebrate?

The anti-white media love to promote this degenerate character flaw that we have accumulated so they can mock and vilify Whites and Australia Day.

I hasten to add, although I may criticize the Aussie ocker I also respect the fact that they have fight left in them, and just like Winston Smith of George Orwell’s book 1984 said, “If there is hope it lies in the prole (proletarians/ ockers).

When ockers are plastered all over the media on Australia Day, you always get a well groomed anti-white forming the argument that this is why we must abolish Australia Day and erase White people from Australia by flooding the country with the third world. Notice how anti-whites always have the same solution to problems.

Imagine if an Indian television presenter in India made the argument that we need to abolish India’s national day and replace Indians with Chinese and Africans because of the shortcomings of Indian culture? Unless you look at the situation from other national perspectives you will never see how far we have fallen to the anti-white system that is trying to destroy us.

This classic cartoon that youtube tries to hide, shows how White people took over America. Although it looks like comedy every word was taken from the anti-whites and flipped. This video still applies perfectly to Australia as well.