On this Saturday, as happened last Saturday, hundreds of thousands of Australians are demonstrating around the country in protest at the globalist directed tyranny that the Australian state and federal governments are imposing on the people. As always, XYZ News has good coverage of the events as they occur. The following is a photo of the today’s Melbourne protest. 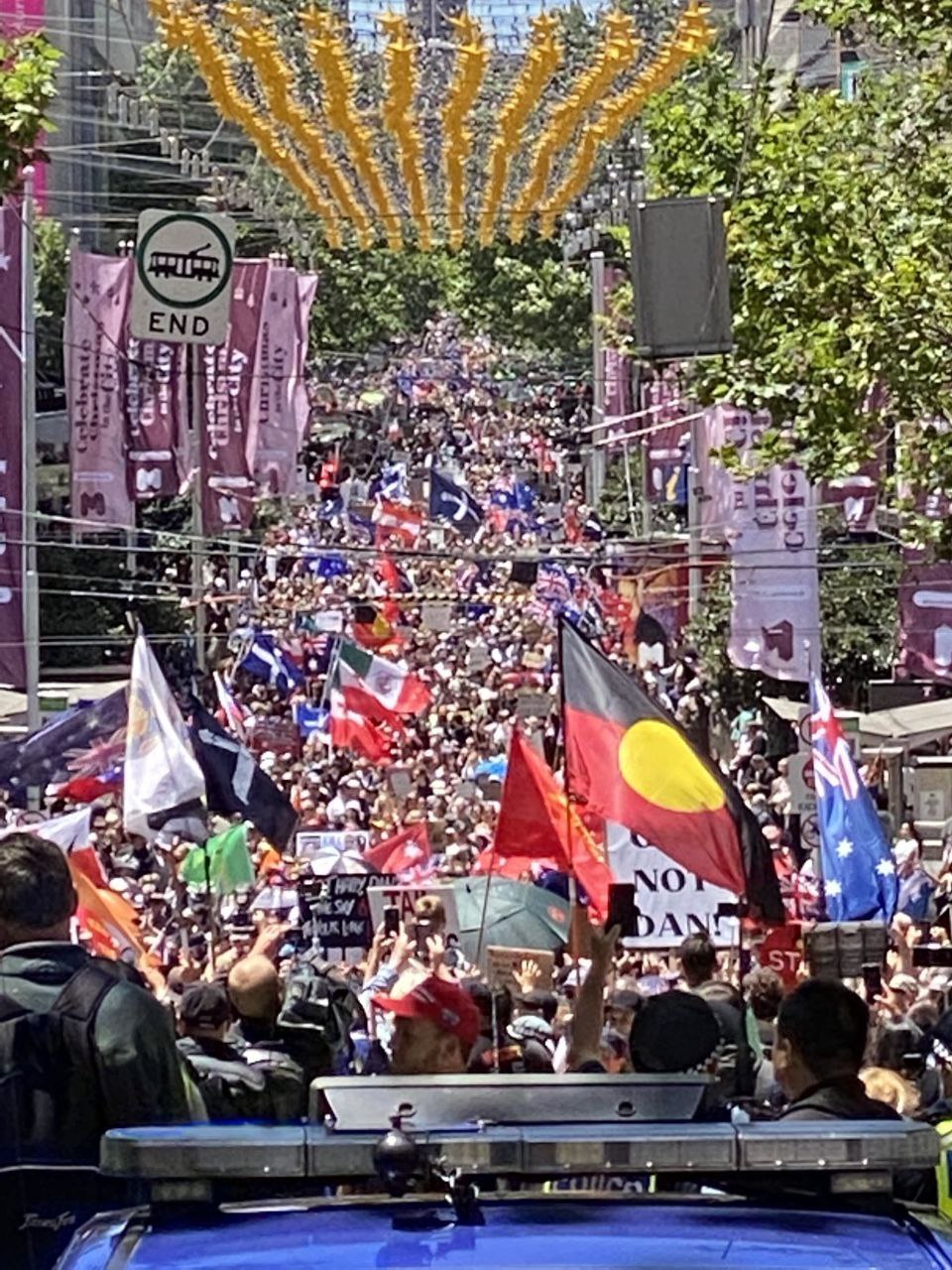 I have mixed feelings about this photo. On the one hand I feel hopeful at the large numbers of people demonstrating against the government. But I also feel despondent. Because even though the vast majority of people present are white, they are not unified. The obvious truth of that statement is reflected in the number of different flags on display.

Every different flag is a cause of division. Some of the flags are of entirely different countries. It is antithetical to me that people would take part in a political march while holding aloft the flag of a different nation. If I were present at a demonstration in Italy I would not be seen dead with an Australian flag. So why do we see them here?

Because we have been invaded. And there are too many of them to be like us. They are not like us, which is why their allegiance is to another flag, another nation, another people.

There are also numerous examples of the aboriginal flag. This is also a flag of division, but in this case of racial division. The aboriginal flag was invented behind the scenes and pushed by Communist infiltrators so as to weaken Australia as a nation from within. The aborigines are their useful idiots in this regard. By sporting this racial flag the Communists are saying for the aborigines, you are not like them. You are apart. You must be treated differently based on the colour of your skin.

There are also examples of the Eureka flag, a symbol of miners fighting against the system in Australia in the 19th century. It has meaning and pathos but it is not the Australian flag. It did not fly at Gallipoli or the trenches of the Western Front, or at Greece or Crete, Tobruk or El Alamein, Kokoda or the many seas where Australian warships fought and died.

That flag was the flag that is shown in this photo of today’s similar demonstration in Perth. 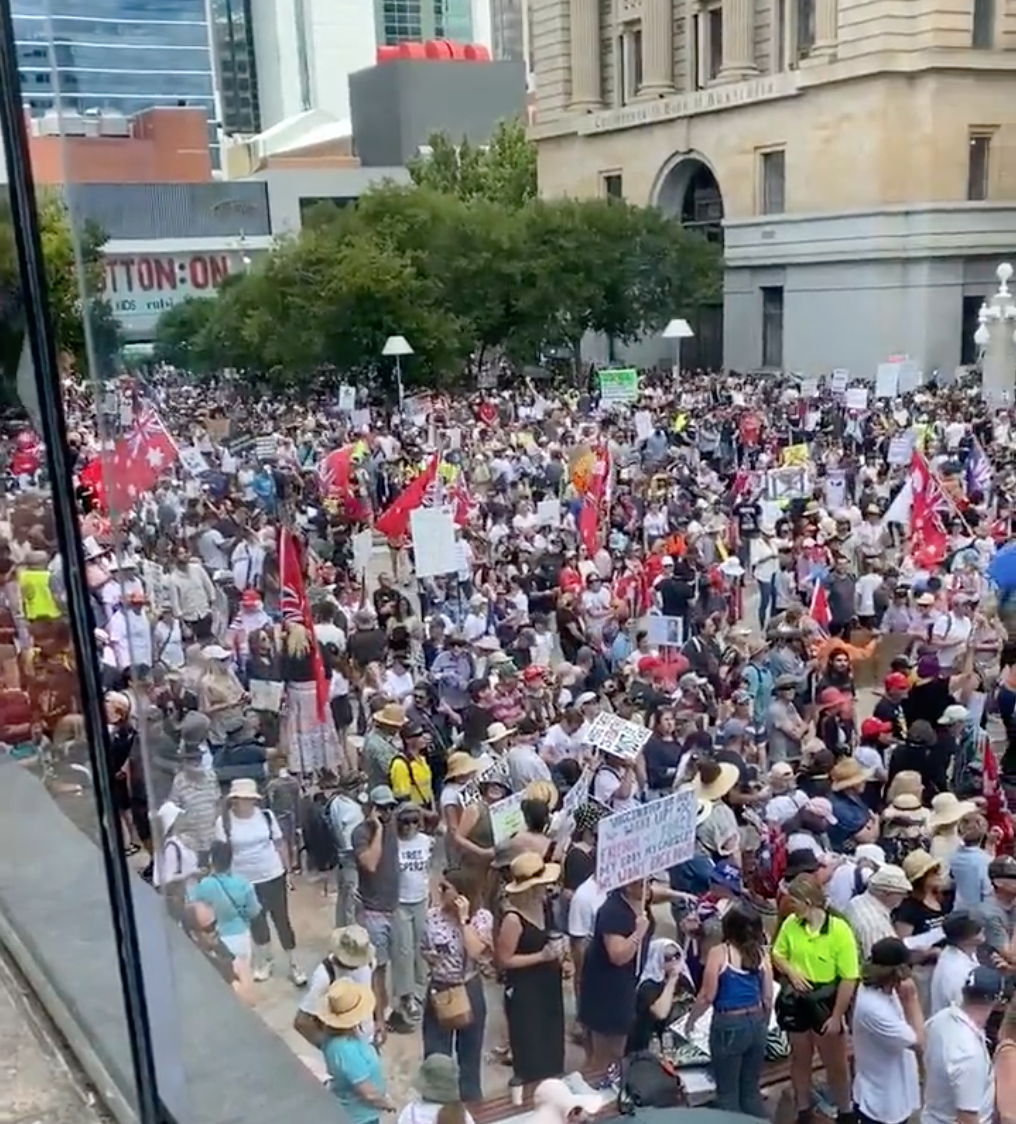 This version of the Australian flag is known as the Red Ensign.

Romanian patriot and nationalist, Corneliu Zelea Codreanu had this to say on the subject of flags.

We permit no one to try raising on Romanian soil another flag, save that of our national history. No matter how hard the workers’ plight may be, we do not tolerate that it rise up against the country or that it make common cause with foreign movements outside our borders. No one will admit that for your bread you lay waste and hand over into the hands of a foreign people of bankers and usurers everything that for two millennia the sweat of a people of workers and brave ones has saved. Your rights, yes – but within the rights of your people. It is inadmissible that for your own right, the historic right of the nation to which you belong be trampled underfoot.

But we will neither admit that in the shelter of the color formulas an oligarchic and tyrannical class may install itself on the backs of the workers of all categories and literally skin them, while continually waving banners through the air for a Fatherland which they do not love; God in Whom they do not believe; Church into which they never enter and Army which they sent to war empty handed.

These are realities which cannot be used as false emblems for political fraud in the hands of some immoral prestidigitators.

A flag is a symbol. It has meaning. It has power. It is why flags have always been used. It is time that we start using our true Australian flag and that we not tolerate any other.