It was most enjoyable watching Saturday’s footage of feral leftists harassing the Real Rukshan.

The plump Sri Lankan kept pointing out to them playfully that he thought they were an “anti-racist” group.

As up to 500,000 people marched through the streets of Melbourne against Victoria’s vaccine mandate and Daniel Andrews’ attempt to instal himself as Dictator for Life, a weird looking woman told the Lying Press that the dozens of hooligans who clambered over the 8 Hour Day Monument on the intersection of Russel Street and Victoria Parade were spreading a “pro-health message”. 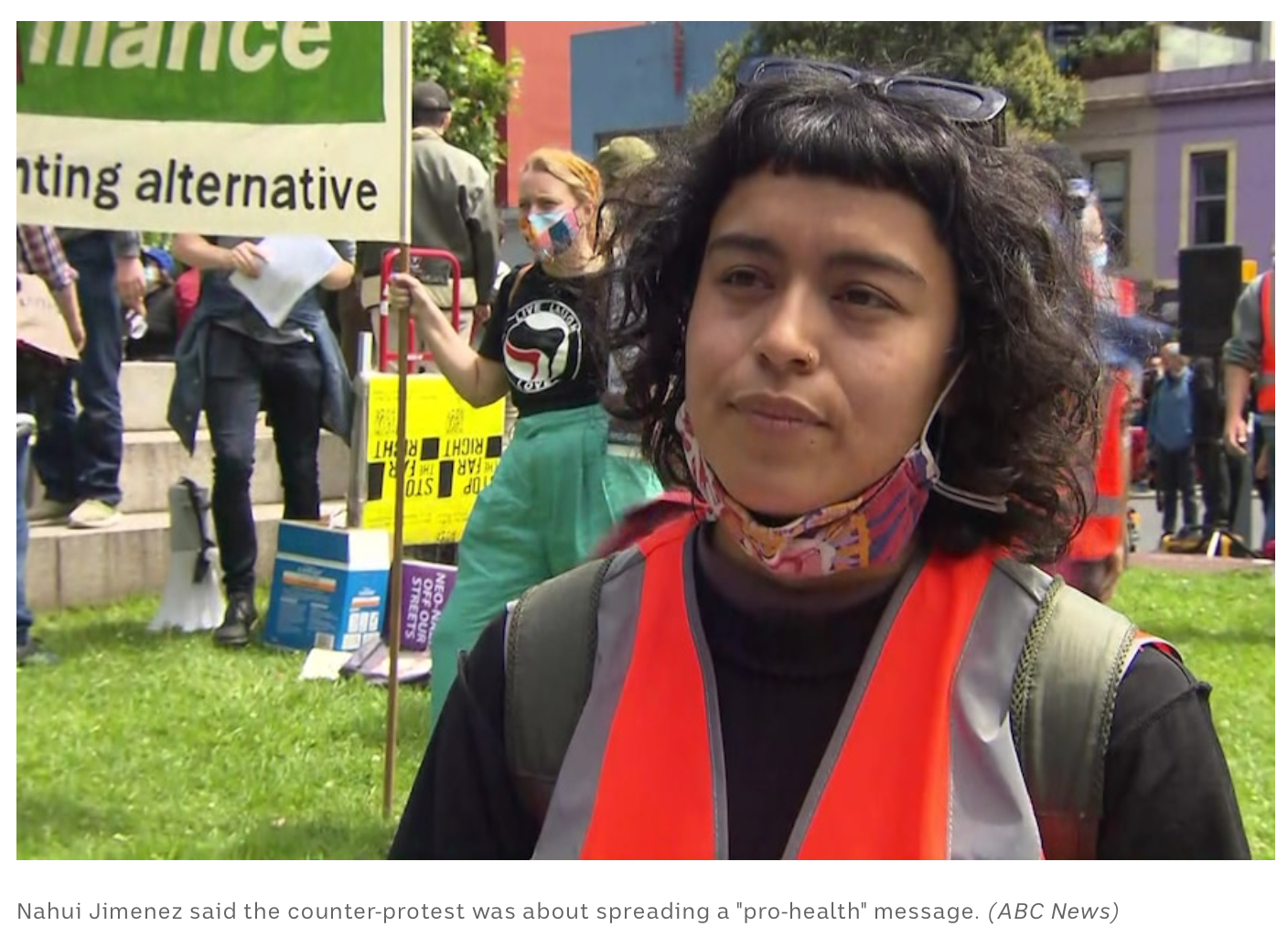 These euphemisms of “anti-racist” and “pro-health” are masks for the true intention of these professional activists, as is the acronym CARF, for “Campaign Against Racism and Fascism”. The agents who organised Saturday’s so-called “counter-protest” are members of the violent Marxist group Socialist Alternative and Anarchist terrorist outfit Antifa.

There is literally a girl in an Antifa t-shirt pictured directly behind the weird looking woman.

These people have been freaking out that hundreds of thousands of ordinary Aussies are mobilising against the interests of the globohomo establishment for whom they act as a tacit paramilitary enforcement unit.

Understanding this, myself and the group of people with whom I attended Saturday’s Freedom Rally avoided the vicinity of the State Library on the corner of La Trobe and Swanston, however we passed the intersection en route to catch a bite to eat once we had decided to call it a day, around 3-4pm.

I still had my eyes peeled, and kept one eye on the skateboarders doing stunts close to the traffic lights on the Library corner, and noticed a couple of ordinary people carrying their furled flags and banners home with them. They crossed the lights toward the Library and the skateboarders while we headed south down Swanston Street. A moment later we heard a few screams, the sound of wood hitting concrete, and we saw a couple of gaunt figures running away with the flags.

It was a sting.

They were Antifa operatives, occupying the corner, with the cover story of being skateboarders, until just such an opportunity – for them to steal the Aussie flag they so despise – arose. It all happened too quickly for anybody to get out their phones, and we dismissed their pettiness as we were more hungry than curious.

However the incident is worth noting because it is an example of the meticulous training and planning these operatives invest in order to intimidate Mum and Dad protesters. They don’t want hundreds of thousands of Aussies marching through Melbourne to push back against the establishment agenda. They want the public domain to be exclusively theirs so they can work in tandem with the Lying Press and a web of pressure groups to push their own anti-civilisation, anti-White, anti-God agenda.

Another example of their methods occurred when Matty Rose and I reported on the anti-Australia march in 2019. A team whose job it was to spot independent media approached us. Some guys tried to steal Matty’s camera, giving him a bloody lip. Two girls got in our faces and berated us because Australia Day was offensive or something. Another girl threw water at me and then hid behind another girl when I turned around to see who did it. I had a bug for several days after. During the hottest days of summer. You can view some footage of the incident from about the 5:40 mark.

They knew what they were doing, everyone had assigned roles and they played their parts dutifully.

A similar operation was carried out in 2017 when Andrew Bolt was attacked on Lygon Street ahead of a book launch. A girl asked for his autograph to distract him, then he was blindsided by two assailants. Bolt mounted a stirring response which left one of the terrorists with severe bruising between the legs.

One of the most violent incidents in Australia’s recent pre-Covid history occurred when Ryan Fletcher was hit with an iron bar during a coordinated assault on an anti-halal protest at the Melbourne Showgrounds in 2016. Black-clad Antifa terrorists swarmed attendees from all sides, and it was only once patriots mounted an organised defence that nearby police intervened.

In America, this standard operational procedure has reaped deadly results. The murder of Aaron Danielson by Antifa terrorist Michael Forest Reinoehl in Portland last year was a coordinated hit involving multiple terrorist operatives. Similarly, Kyle Rittenhouse was the victim of a coordinated Antifa-Government Agency hit. One Antifa terrorist assaulted him with a skateboard, another rushed in with a gun pointed straight at him (costing the terrorist a bicep) while government agents filmed the entire thing.

This brings us to a parking lot in the Cathedral Ranges in May 2021, at which were present multiple government intelligence and police agencies. Somehow we are supposed to believe that a handful of jewish homosexuals with prior knowledge of the group they were surveilling just happened to be there for no particular reason when they started filming them.

What we see then is a pattern of well-trained Antifa operatives conducting a range of urban warfare missions, in collusion with state intelligence agencies, the judicial system and the Lying Press in both Australia and America.

It is crucial not to underestimate these people as cartoon idiots. Their ranks even contain people who literally trained as terrorists in the Syrian Civil War.

We have to ask ourselves, if the university crowd of professional agitators, ie, Marxist terrorists, are so anti-establishment, why are they protesting in support of government policies which force people to choose between taking a dangerous vaccine and losing their job?

If there is such strong support for the government’s Covid response, why is it then, when half a million people take to the streets around the country in protest against government policy, that the only people to turn up in support of government policy are a handful of scruffy, Marxist terrorists?

The answer understandably takes the pro-freedom protester, who is only just waking up to just how badly our governments have betrayed us, further down an uncomfortable rabbit hole.

Yes. Our government is literally employing Marxist terrorists to harass, intimidate and bash ordinary people who oppose heir agenda, and they have been doing it for years. When you look at who they traditionally target as their enemy, it makes you question what has been the agenda of our governments all along.

For now it is crucial that people continue to turn out in the hundreds and thousands, in the millions against these insane vaccine mandates. Take you children and your grandparents. However, don’t let them out of your sight.