Thusly the function of the system is to profile non-kosher elements and use the legal system to frame and destroy said treif entities as anti-system pariahs.

Where the system elevates the traditionally mentally ill to higher office, non-kosher elements who can be profiled with having psychiatric or neurological conditions that have peer-reviewed research substantiating certain relevant character flaws are used to cement “reasonable doubt” before the kosher kritarchy and get a conviction.

Of course such “reasonable doubt” is lost in the legal translation when the offender in question is a defender of the Plutocratic parasitism that is destroying Occidental civilisation.

Those who can’t be profiled as being “mentally impaired” are targeted for systematic framing as wilfully malicious offenders in either the criminal or civil context. Hence when the nationalist is in the crosshairs of the Zionist Occupation Government the only recourse we have beyond the courts is that which we forge by sheer force of will. 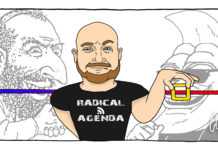