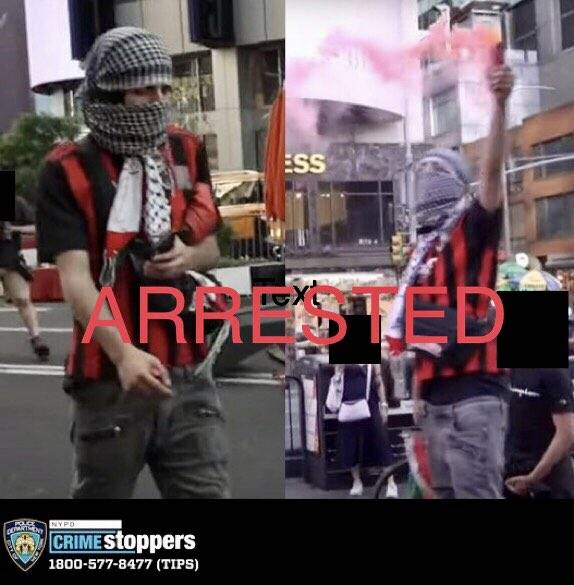 The NYPD has a message for New Yorkers: don’t criticize Israel in their city.

Last May, demonstrators took to the streets of New York to protest the slaughter and ethnic cleansing of the Palestinian people.

They are now suffering selective prosecution at the hands of the ostensibly American NYPD, who are not only trained by the Israeli government, but even have an official branch in Tel Aviv.

Since June, multiple protesters have been arrested for “hate crimes” related to anti-Israel protests. The main crime appears to be public expressions of outrage at the Jewish state’s violent and genocidal policies.

In one viral video during May 20th demonstrations, an man lit a firecracker that Jews and Israeli propagandists on social media claimed was a bomb.

The footage clearly shows that nobody was hit with sparks from the firework, but a 55-year-old Jewish woman claimed to have suffered an injury and filed a police complaint. According to the New York Post she was taken to a hospital for “burns to her back” then quickly released. Police did not mention this woman’s supposed injury in their press release.

NYC has strict fireworks laws and setting them off is a class B misdemeanor, but because of the political context of the incident (the suspect was protesting against Israel) he has been hit with second-degree reckless endangerment as a hate crime.

The individual in question, 24-year-old Mohammed Othman, was also charged with first-degree gang assault as a hate crime and third-degree assault as a hate crime related to a minor skirmish with a group of Zionist counter-protesters. Multiple other Palestinian protesters are being charged for the incident but the Jews who were arrested were quickly released and driven home by the cops. The two Jewish “victims,” Amit Skornik and Snir Dayan, are trained IDF soldiers and were mutual combatants.

Hate crime enhancements, which are primarily applied in defense of privileged groups like Jews, gays, and occasionally blacks, significantly increases penalties for crimes.

But the NYPD is not stopping there.

On July 2nd, its hate crimes task force demanded the public to inform on three individuals who posted a sticker of the Israeli flag with a Swastika superimposed on it. The obvious context is the liberal view that Israel is a Nazi state, and is not aimed at any group in America.

The tweet, which declared the three “hipster” looking Arabs as hate criminals, tagged the Anti-Defamation League and Simon Wiesenthal Center, demonstrating that the investigation was politically motivated.

In an unrelated case, a young black man pulled down a rainbow homosexual flag in his neighborhood. He did not damage the business or hurt anyone, but the NYPD is nevertheless launching a city wide manhunt to find and punish the individual.

On June 16th, the NYPD announced a similar investigation over an elderly white woman who apparently made “anti-immigrant” remarks, then started shaking a pepper shaker.

Days before, they published a Wanted tweet for a mentally ill black man who “made anti-Semitic remarks” to a Jew, but did not touch him.

Many of the incidents on the NYPD’s hate crimes bulletin appear to be First Amendment protected speech or minor violations, rather than violent assaults.

The distinctive factor in all these cases is that the “hate criminals” are expressing views that go against America’s ruling political ideology.

Jewish controlled leftist groups that claim to be for civil liberties, such as the ACLU, all support hate crimes laws.

For Arab-Americans who believed they would have leeway to protest against Zionism that Black Lives Matter rioters had when protesting against whites last year, they can now see who really controls America.