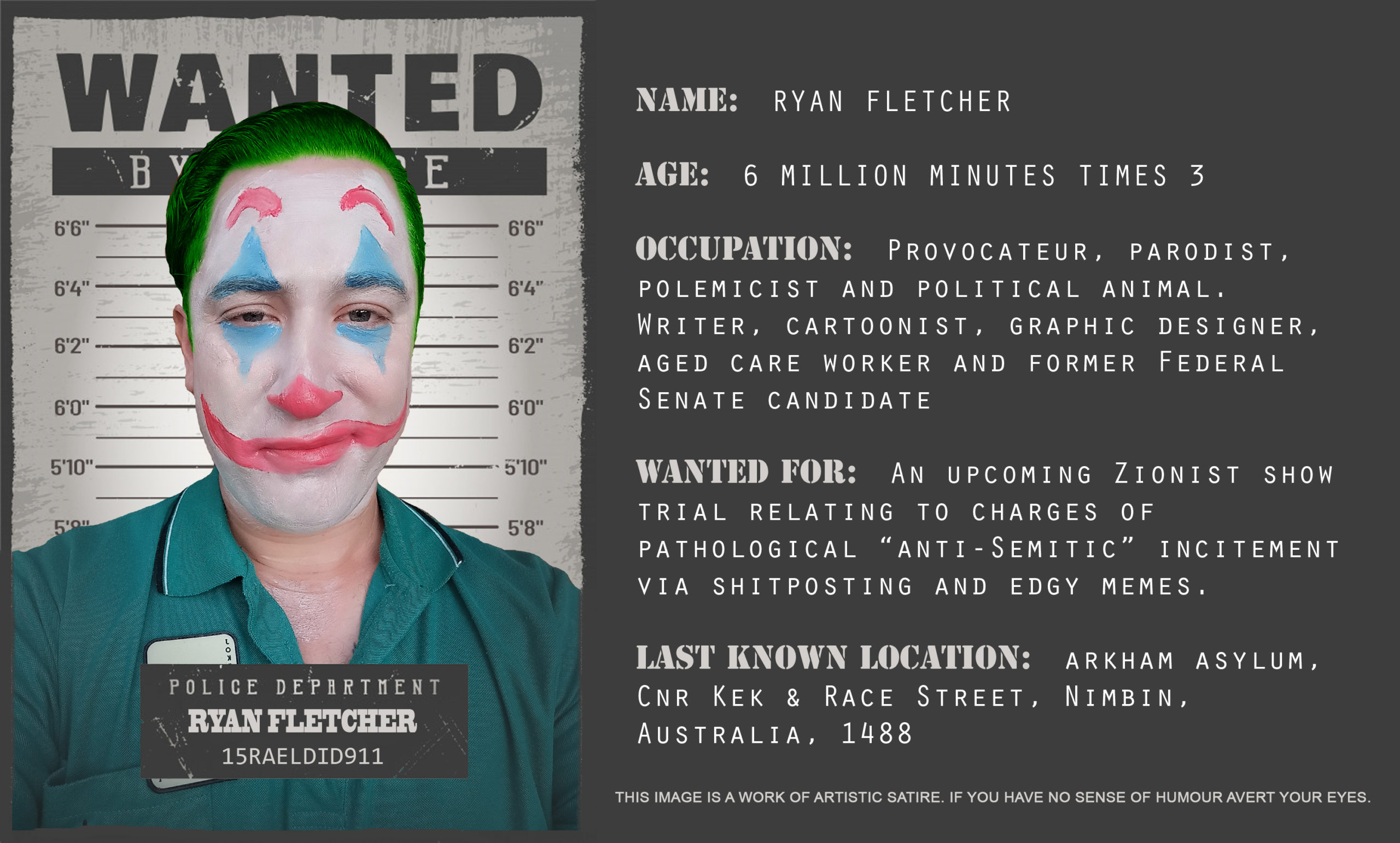 I wish to make a submission to the Parliamentary Joint Committee on Intelligence and Security whom are currently conducting an inquiry into extremist movements and radicalism in Australia.

If it pleases the Committee to know I am a writer, cartoonist, graphic designer, aged care worker and former Federal Senate candidate who publishes content via the Australian media outlet The XYZ (which is marketed as the polar opposite voice to the left-wing partisan Australian Broadcasting Corporation).

Regarding section 1(a) of the terms of reference being considered by the Committee, it is my informed opinion that the foremost motivations of “far right-wing extremist groups” is to see their families, race and nation prosper. This is partly expressed via a zealous opposition to multiculturalism, liberalism and various treacheries instigated by an unelected hyper-ethnic plutocratic elite, who seem to be hell bent on disseminating an anti-European narrative to the broader publics of Australia.

With respects to section 1(b) of the terms of reference it should be noted that I myself am presently being investigated by the Victorian Security Intelligence Unit (SIU), who according to the Victoria Police Counter Terrorism Strategy 2018-2021 is tasked with the duty of “Disruption”. As to what extent “terrorist offenders” constitute a “risk to the community” it should be noted that I’ve had no criminal or civil offences put against me until the week following the 2020 U.S. Presidential election. Having observed the current hyper hysterical media climate surrounding the “far right-wing” in America at the moment, I’m personally cynical of what Australian governments at all levels consider a “risk”.

It is my educated understanding, regarding section 2 of the terms of reference, those deemed to be in the milieu of “extremist movements” are likely being herded into spurious “international extremist organizations” by certain operatives in the Intelligence community itself. To what degree these sorts of tactics are used by those in the Australian Intelligence and Security services should be an issue pursued by the Committee.

With respects to section 3(a) of the terms of reference, any changes to the Commonwealth’s terrorist organisation listing laws that seeks to wage a dragnet against patriotic White Australians and characterise said Australians as a threat to their own country, will likely prove to be a monumentally destructive proposition. Particularly if the Committee consider the fact that the descendants of Australia’s White founding stock still make up a sizeable portion of the country at present.

Any changes that could be made to Australia’s Counter-Terrorism Strategy in relation to preventing “radicalisation to extremist views” will undoubtedly require federal, state, territory and local governments to stop antagonizing White Australians with hyper-liberal policies. Such policies are resulting in replacement level White demographic decline, due in no small part to mass immigration and subsidization of cultures that are diametrically opposed to Whites and “Whiteness”.

Any move to proscribe those deemed to be “fostering disharmony in Australia” as terrorists for not zealously supporting government policies that are objectively hostile to White Australian identity and culture, will inevitably act as a conduit for persons to pursue a “pathway to extremism”.

Any further steps by the Commonwealth to disrupt and deter hate speech in the current manner is likely only going to antagonize more hate speech, as precedent shows us that top down repression against people freely expressing themselves usually results in ugly if not violent consequences.

Any consideration to regulate or outlaw the use of symbols and insignia associated with terrorism and extremism, including online, will likely only prove useful in raising revenues by way of fines and/or filling up prisons with people not aligned with the political agenda of the presiding power structure of Australia.

Any steps by the Commonwealth to “reinforce social cohesion”, by framing White Australian advocacy as an inherent pathway to “violent extremism” will likely only further fracture cohesion and likely only amplify animosity to the system and society more broadly. The “growing diversification of extremist ideology” in Australia is reflective of the market of ideas and division of labour advancing said ideas.

It should be noted by the Committee that virtually ALL market incentives to reach out to encrypted communications platforms and the dark web by those deemed “extremists” is a result of social media platforms engaging in “deplatforming” tactics. This is further the case of said “extremists” having to rely on alternative means of currency (i.e. cryptocurrency) when financial institutions and payment processors enact questionable repression tactics.

The Committee should consider that the Constitution of Australia was federated upon the premise of the White Australia Policy, and that every person in Australia who has affinity for this fact is designated a “far right-wing extremist” in the current year. If the goal of the Commonwealth is to scapegoat on citizens who express such affinity by characterizing them as violent pariahs, expect such self-fulfilling prophecies to be inevitably fulfilled in kind.