Daniel Andrews has actually done something logical, so obviously I’m suspicious. All the people we usually laugh at are really upset at him. It is important at times like this to remember that the enemy of my enemy is still my enemy.

So if you liked the Avatar film, maybe you’d appreciate how it feels when your sacred ancestor trees are torn down by the very government who want to Treaty with us. Absolutely gutted and feel the pain of our ancestors right now 😞 pic.twitter.com/sWt3k36jb3

He cut down a tree to make way for a road.

Approximately 50 people were arrested at the Djab Wurrung protest today, with Victoria Police using additional powers allowed under the state of emergency to arrest, charge and fine protesters.

Of those 50 people, approximately 10 were arrested at the site and taken to Ararat Police Station, where they were charged with intentionally obstructing an emergency service worker on duty, refusing to leave a restricted access area and refusing to follow the Chief Health Officer’s directions.

Another 40 people were arrested for refusing to leave a restricted area and – again – failing to comply with the CHO’s directions. They were released pending summons, a police spokesperson said.

In addition, a “significant” number of people were issued with fines for breaching coronavirus restrictions, which currently do not allow for Melburnians to travel to regional Victoria.

Police are able to issue fines of up to almost $4,957 for taking part in an unlawful gathering, thanks to additional and broad powers given to CHO Brett Sutton under Victoria’s state of emergency.

Lidia Thorpe, the first Indigenous Senator for Victoria, said the fines would put people at risk of entering the justice system.

“This is a continual cycle of systemic oppression from the government, both state and federal,” she told PEDESTRIAN.TV.

When asked if it was an overreach of police powers, she said “absolutely”.

“They’ve been looking for any excuse to remove those land defenders from Djab Wurrung protest,” Thorpe said.

The timing of the premier’s press conference yesterday was the time that they started to encroach on the [Djab Wurrung Heritage Protection] Embassy, so it was all a very calculated and well-thought out plan, and the police powers are part of that plan.”

Yesterday, a sacred 350-year-old yellow box tree, known as a directions tree, was felled – at almost the exact time Premier Dan Andrews announced long-awaited easing of restrictions for the state.

As alluded to earlier by Lidia Thorpe, The XYZ has, naturally, obtained exclusive footage of the incident:

“It’s part of this racist and oppressive system that Aboriginal people have to deal with every day, day in and day out, and this is what needs to change in this country,” Thorpe said.

“These are innocent, unarmed people, peacefully protecting land that belongs to the Djab Wurrung people. Why is that unlawful?”

She described the felling of the tree as “like losing a loved one in your family”.

“I’m quite traumatised,” she said. “We were always willing to make way for the road, we had alternatives, we wanted to do this peacefully and respectfully, and the government used their force as they always have.”

Footage shared on social media today showed a protester being pinned down by four Victoria Police officers, screaming in what appears to be pain.

This emotional guff just goes on like this. It is bizarre that a man who is either a stooge for the Chinese, a stooge for the globalists or possibly both would make such a logical decision to cut down a stupid tree to make way for a road.

But this goes deeper. Aboriginal identity politics is basically a way for slightly aboriginal Marxists to exploit the poverty of pureblooded aborigines to undermine the ethnic homogeneity of Anglo-Celtic Aussies and the cultural dominance of our British heritage, in order to turn Australia into a deracinated vassal of their globalist banker overlords.

They use the very simple tactic of chucking a collective tantrum until they get what they want. Then they pick their next goal and chuck another tantrum.

For as long as I can remember this has always worked, our governments have always given in. This is the first time in my life that I can remember an Federal or State government anywhere in the country saying no to slightly aboriginal Marxist agitators.

To reiterate, this is the first ever real pushback I have ever seen in my memory Australian politics – this goes back to the 1980’s – against the retreat of our own culture and the advance of Marxism under the banner of aboriginal rights.

This should become the norm. These slightly aboriginal Marxists are currently playing the politics of the weak, appealing to and exploiting our innate Aryan empathy, but if they ever gain the upper hand they’ll spear us without a second thought.

Thus we should project strength at all times. Divert roads specifically to run over their stupid trees.

Because just remember whose land you’re on. 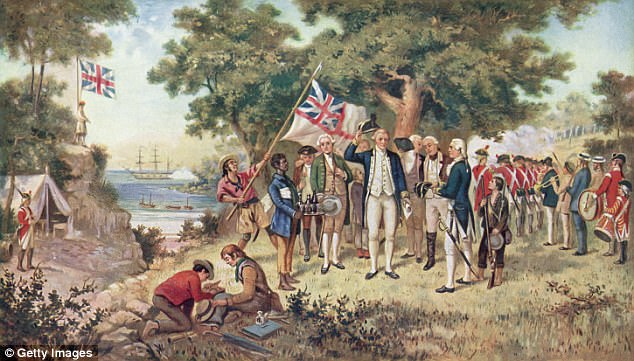