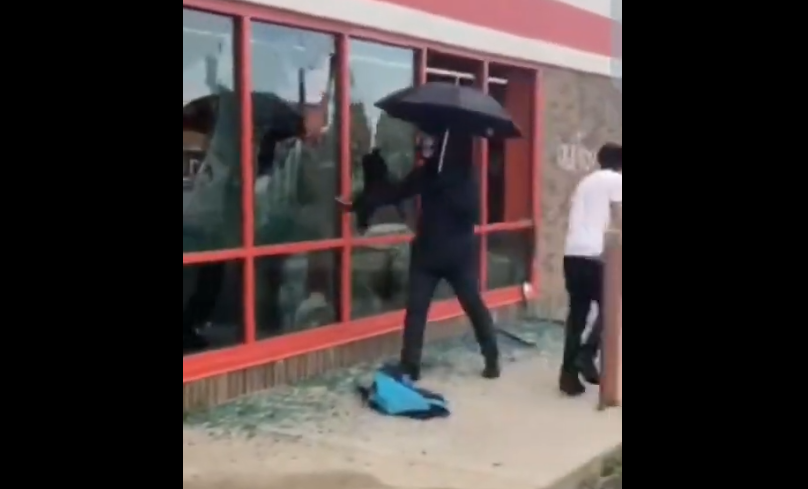 We white people sure have a lot to be sorry for, and by we white people I mean we British people. We destroyed so many beautiful ethnic groups in our mad quest to build an empire for somebody else that only made us debt slaves to them.

We killed, destroyed and demoralised a lot of people in the name of liberal imperialism.

The Irish Gaels, for example.

The Boers, who we put in concentration camps and then labelled racists.

And of course, the Germans. The poor Germans. The people who gave us Protestant Christianity and whose young men we butchered, whose cities we burned and who we put eternal guilt on for the unredeemable sin of ‘anti-Semitism’.

We have many collective sins to repent of.

There are many things to love about Germany, its people and its culture. For example, the word schadenfreude.

The windows at CNN’s headquarters in Atlanta are being smashed in. One might say the chickens have come home to roost. pic.twitter.com/J1BtAdNkGc

When we see hordes of Bastketball-Americans chimping out, it’s tempting to blame them. We can point to legitimate facts about racial IQ and patterns of group behaviour, give in to one side of the debate and pick a team in the coming US Civil War 2.0.

Mahmoud is onto them.

The scheme of the world powers is to cause disunity in order to keep all societies under control. The killing of #GeorgeFloyd was deeply disturbing & upsetting & is the result of the current world order which we all must unite against.
“Pull the trigger kill a Nigga he’s a hero” pic.twitter.com/1giRGxPy68

It’s the people vs the oppressors. That’s the fight. That’s the dialectic, and The Powers That Be (TPTB – however you define them) are working overtime to make sure we don’t see that and unify against them.

That’s why they opened the borders and carried out false flag Islamic attacks while pushing multiculturalism and demanding that anyone who objects to millions of Muslims coming in is racist. It’s why they leak a manufactured virus and then tell us that it’s both the most deadly thing ever and ‘just the flu’ so that now family members are screaming at each other over the plandemic.

As William Blake wrote, a truth that’s told with bad intent beats all the lies you can invent.

They do these things because they know they will divide society against itself. That’s why they do it; so we don’t start to notice them, get organised and overthrow them.

This is not an argument for multiculturalism or libertarianism or open borders utopianism. TPTB use those utopian ideologies as tools to manufacture division, foment revolution and keep us proles disorganised.

And they have malicious agents who assist with that agenda.

Minneapolis locals who uploaded the video speculated that he was an undercover cop. This is absurd. Cops don’t do this. The people who show up at all these critical incidents and foment social division are working for a much more nefarious agenda than your local coppers.

These are paid anarchist agents. They might be intelligence or even military, but more likely they’re teaching Postcolonial Gender Studies at the local community college and are on the Soros payroll. They are fanatical adherents in an anarchist cult which believes in using violence to trigger social breakdown so that capitalism can be ended and their gender-free, trans-racial utopia of tolerance will break out spontaneously and their lives will begin to mean something.

MAKE IT MAKE SENSE
Explain to me why are White Leftists Antifa Thugs destroying black communities ?

How is this Justice for George Floyd?
How is this helping black people??

George Soros are these your paid thugs ? Tell them to stand down.

They are supported by sympathisers in the mainstream media and left-wing politics who provide them with moral cover by hiding their involvement in false flags and critical incidents and then justifying mob violence or Islamic terrorism or female domestic violence or whatever needs justifying.

One person shot dead during violent protests over the death in police custody of a black man https://t.co/I37PArXO8J

The same radical campus academics who put on face masks and smash up stores or put bike locks through conservatives’ skulls at MAGA rallies then rush back to their cubicle to type out an op-ed explaining that mob violence is justified because slavery and patriarchy and structural oppression of brown people.

These useful idiots of the cabal have no idea that they are just as financially enslaved and mentally controlled as the rest of the proles. Believing themselves wise, they are the most foolish people on the planet.

Pointing out any of this quickly leads to being labelled a ‘conspiracy theorist’. Again, that’s not accidental. They needed a derogatory label for people who would dissent from the mind control. The irony is, the default worldview of these anarcho-whatevers who carry out incidents like that in Minneapolis is thoroughly conspiratorial.

Marxism is the original conspiracy theory, and it is preached relentlessly in every classroom and lecture hall in the country. It is a worldview based on paranoia and envy which weaponises the sinful nature of man to destroy people who have worked to build wealth or had the good fortune to be born well-to-do. This cult of envy is now our default public religion and justifies taxation on the productive, slander toward the sensible and disdain toward those with good values.

Mister Marxist mind controller himself Phillip Adams demands you get back on the plantation, cracker.

The use of utopian anarchist freaks to trigger wars and revolutions is an old cabalist playbook. It was used extensively in Europe during the French Revolution, the 1848 revolutions and to trigger World War I when anarchist Gavrilo Princip assassinated Archduke Franz Ferdinand. Long before the Salafist Wahhabis were blowing up kids for Allah, communist zealots were murdering for the worker’s utopia.

The history of South America is also full of such terroristic left-wing groups, such as the Tupamaros in Uruguay. Christians I’ve spoken to who lived through the Marxist reign of terror there tell of hiding under the bed praying in the dark, because if the Tupamaros found anyone not protesting against capitalism in the streets at night they’d kill them.

Such friends of the people.

This time though, the left won’t win. Trumpism is ascendant, and I suspect we’ll see a political reaction against the anarchists and their PoC pets which will be severe and devastating. The battle lines have been drawing up since 2017.

We have placed a public interest notice on this Tweet from @realdonaldtrump. https://t.co/6RHX56G2zt

Trump and his supporters in the military and police will eventually push back kinetically, and conservatives will cheer. We’ll reach peak schadenfreude.

All of this, however, will be happening during a period in which the freedoms we take for granted in the West will be disappearing. The democratic socialist system which governs us is bankrupt, financially and morally, and a new system is emerging to replace it. Its faint outline can already be seen among the rising alt-media stars riding Trump’s coat-tails.

And if you look closely, you can see who is going to come out of all this chaos ascendant. The masters of a new order. The rulers of the world.

It’s not going to be the British who rule this time.