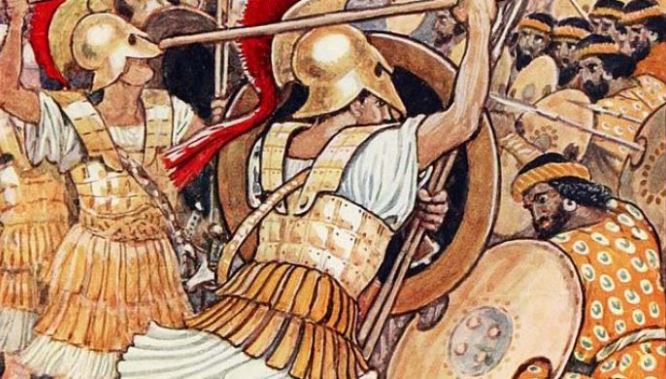 According to some conservatives, saying that makes me a leftist. Or a Muslim. Or a Nazi. Or all of them. It’s heresy.

If we keep our eye on the big picture though and avoid getting caught up in news cycle propaganda and emotional symbolism, it’s clear to see that another war in the Middle East is the last thing America and particularly Australia need right now.

Before you scroll furiously to the comments section to accuse me of being a shill for Ilhan Omar, hear me out. This is important.

Iran is not the Taliban. It’s not a ragtag bunch of boy-loving warlords our intelligence agencies can play off against each other while pinching their resources. This is Persia.

These people were fighting the Spartans at Plataea while our Saxon ancestors were still living in huts in northern Germany.

A war against Iran would make the wars against Afghanistan, Iraq, Libya and Syria so far look puny by comparison.

Not only is Iran big and organised, they have formidable capabilities in offence and defence. Missiles which Iran presumably obtained from China or Russia have been able to penetrate US missile defence systems.

These include strikes during the recent attacks on US bases in Iraq. When Iran attacked Saudi Arabian facilities in September last year, the accuracy rate was 95%. These are not homemade Palestinian rockets we’re talking about here.

Iran also has the Russian S-300 air defence system, and this week Russia offered Iraq the extremely powerful S-400 system to bolster its defences after the assassination of General Soleimani.

Should Russia do the same for its ally Iran in the event of war with America, it would be a game changer.

America has sustained relatively light infantry casualties in battle, because they’ve had air superiority everywhere they went since World War I.

The S-400 would change the balance of air power in favour of the defender and would make US air force capabilities pretty much moot.

This means an all-out war against Iran would require the use of tactical nukes – against a close ally of Russia. On Russia’s border. This is Dr Strangelove territory we’re entering here. It’s madness.

Russia is not the only other great rival of the United States which has offered Iraq military assistance in the wake of the Soleimani assassination. Shortly after the attack, Chinese representatives met with the Iraqi PM to do the same.

This is the brewing conflict Western nations should be preparing for, rather than looking for another neoconservative imperial adventure to squander the blood and treasure of the West on. This is the enemy internet pundits like me should be alerting people to.

Iran is the war of choice for the people who run American foreign policy. China is the war of necessity Americans, and Australians, are going to have to fight this decade.

The neoconservative agenda of wars in the Middle East, which is not a conspiracy theory and has caused such catastrophes as the European migrant invasion, has drained the blood and treasure of Western nations right when the most credible rival to Western power in five centuries is flexing. And most conservatives are too busy chest-thumping against the Persians to notice.

Slowly, steadily, China is getting ready for the fight. We, however, are totally preoccupied elsewhere.

In the 19th century, the USA established regional hegemony over the Western hemisphere and proclaimed the Monroe Doctrine to the rest of the world.

Stay out of our patch, basically, and we won’t colonise elsewhere.

America was able to use that homeland security to their advantage during the wars of the 20th century. By the end of the Cold War, the USA had freedom of navigation in all sea lanes of the world.

This is what has underpinned economic globalisation. This, along with the alchemy of central banking, is how the world got rich.

Nations traded maritime sovereignty for economic development, and those who went against the military and economic order of the Western hegemon got Gaddafied.

China is now challenging that US freedom of navigation in the South China Sea. They aspire to control the Asian region in the same way the US controls the Western hemisphere.

America is not just going to roll over. There will be a fight, and we’ll be on the front lines.

History doesn’t repeat, but it does rhyme. There are patterns you can identify and use to analyse the present and, to some extent, pick out the future.

There are echoes that remind us of America’s geopolitical situation today. The parallel that comes to mind is the lead-up to the Peloponnesian War in the fifth century BC.

Ironically, fresh off their naval victories over the Persians, the Athenians were the undisputed masters of the seas. They were the economic hegemon of the Greek world. Their currency, the Athenian owl, was the reserve currency, as the US dollar is today.

They were also champions of democracy and leaders of the free world, at least in the Aegean Sea. What NATO is to the United States, the Delian League was to Athens.

The growing arrogance and overweening power of the Athenians led the Spartans to create a coalition of anti-democratic forces and go to war on Athens.

The ensuing war lasted 25 years and led to the destruction not only of Athens as an independent state but the decline of Greek power generally.

A few decades later, Philip II of Macedon and his son Alexander took over the weakened Greek world.

In our postmodern re-enactment of this drama of early Western history, will Russia be Sparta and China be Macedon? Only time will tell. When titans clash though, little guys like Australia must be clear-eyed and firmly resolved if we wish to survive.

The moment of greatest threat in Australian history occurred in 1941-42. Having sent our troops to fight for Britain in North Africa and Egypt after the outbreak of war against Germany, we found ourselves largely defenceless once the Japanese began marauding across Asia.

We had committed ourselves to an imperial front in the desert sands far from home instead of preparing for the fight in our own backyard.

When Singapore fell and British power failed, America rescued us. We would have fought bravely and well, but ultimately we would have capitulated to Japan without American assistance.

You only get one America in your nation’s lifetime. The USA of today is fat, broke and decadent, while China is lean, well-equipped and mindful of past humiliations.

When the next world war in Asia starts, and one day soon enough it will, we might again find ourselves on our own and far from friends.

Let’s not send our best boys to die in the sand for others again just when we’ll need them most. Let’s stay home this time.