With episode 88 of A Ryan Rant coinciding with Australia Day 2020, I thought it pertinent to illustrate the greatness that is the sunburnt land of shitlords.

Despite the fact that political speech is meant to be a legally and principally protected from criminal prosecution under common law, the Libtard fake news media has induced a degree of Talmud tier tyranny, that none of us in the nationalist alt-media have one iota of respect for.

Though Australia has the typical feral population pests that make carp and cane toads seem ecologically tame, Australia undoubtedly has a thriving spirit of nationalist and patriotic fervour that pushes back against the parasitic pinko pollution.

With average true blue family men having ascended to positions of power in the past, with an unapologetic zeal for all things politically incorrect, such as professing an affinity for good old fashioned grandma knit golliwogs, and telling gun-grabbers to get stuffed, it’s a testament to the Aussie aura of chad tier diplomacy.

Even as affluent anti-Australian Zionist warmongering fraudsters, scam tax-payers out of billions of dollars for their intelligence networks to hunt down blue collar anti-globalist gonzo artisans, who point out the bloody obvious coincidences underpinning the proverbial meat grinder for Hebrew hegemony, it should be reiterated time and time again that Australia is a White man’s country, despite what some subspecies might have you believe. 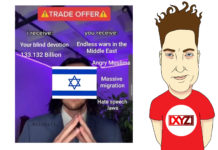