Some people have queried how it is that my fellow compatriots and I haven’t been vexatiously sued out of existence by certain public figures astute at weaponising 18C of the Racial Discrimination Act.

Under 18D of the Racial Discrimination Act it outlines that Section 18C does not render unlawful anything said or done reasonably and in good faith with respect to:

(a) in the performance, exhibition or distribution of an artistic work; or

(b) in the course of any statement, publication, discussion or debate made or held for any genuine academic, artistic or scientific purpose or any other genuine purpose in the public interest; or

(c) in making or publishing:

(i) a fair and accurate report of any event or matter of public interest; or

(ii) a fair comment on any event or matter of public interest if the comment is an expression of a genuine belief held by the person making the comment.

Translated into the realm of politics it has been noted that my approach is one that synergistically incorporates performance art with that of the role of agent provocateur.

While not in the same league as those who’ve made millions calling out the plundering plutocratic pinko paedophiles running the globohomo establishment, or Conservative Libertarian cartoonists who’ve had their content appropriated by National Socialists, I can say I’ve had some humble impact in the noosphere as it were.

Some people might be concerned with other people being too appreciative of memeatic art, howeveri it’s worth remembering that as they attempt to disarm us verbally, physically and spiritually that it’s important to stay vigilant against those who’d do us harm. 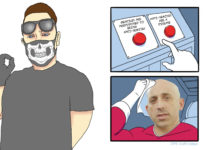