In 2017 a paper was published in the peer reviewed journal World Development which sought to explain the types of people in Great Britain who voted for the UK to leave the European Union. A subsequent article was published in the Independent in August that year entitled “Brexit caused by low levels of education, study finds.” The opening paragraph states:

“Britain would have likely voted to remain in the European Union were its population educated to a slightly higher level, a new study has found. Researchers at the University of Leicester say that had just 3 per cent more of the population gone to University, the UK would probably not be leaving the EU”.

For many, this may seem obvious due to the fact that mass indoctrination into global-cultural Marxist thought will produce certain outcomes among its adherents. It’s like saying ‘less women would be assaulted or murdered if they were educated in safe use of firearms and self-defence’ or ‘appreciation of hard work is directly correlated to participation in the workforce’, or even ‘people likely to maintain strong marriages if they attend church frequently’.

Yet the obvious connotation and sentiment of the article, and the whole purpose of the study in the first place, was not to provide informative insight into how national referendums are shaped and influenced. The purpose of the article and study is to brow beat and humiliate the Brexiteers and their patriotic sentiments while simultaneously elevating the intellect of the global-cultural Marxists. Furthermore, they have been written to stir up a sense of grievance as though the good and moral smart people of Britain were robbed by a filthy – mostly male – underclass of goblins. You can find a plethora of this notion by simply typing ‘low information voters Brexit’ into Google. The results will show a combination of resentment, mockery, disdain, and demonization with an ever presence of arrogant elitism.

Never realising the ineffectiveness of their targeted harassment campaigns, the elites seem to embarrass themselves continuously while elevating those of whom they wish to non-person. In April 2018 an article was published in the Daily Telegraph about British rock icon Morrissey of The Smiths fame entitled “Morrisey tackles Brexit, Hitler and hard-to-find eggs in bizarre self-published interview.” The article opens by stating:

“British politics, halal meat, the monarchy: this charming man has opened us(sic) mouth again to let us know that (as he sung back in 1983) “he knows so much about these things”.”

The article goes on to describe the former Smiths front man’s behaviour as eccentric and it details his disapproval to an article published in Spin magazine which described his political beliefs as ‘bordering on fascism’. The use of the term “far-right” is also featured in the Daily Telegraph article as one can expect from a main stream media publication. Morrisey seems to be enjoying a renewed level of notoriety (also known as fame), in light of his beliefs being ‘exposed’ (again) but we must not expect that this type of demonization will stop anytime soon from culturally elite Marxists, as it’s carried on for some time now, and it seems that a background in matters of public policy are not a pre-requisite to having a valued opinion on such matters… so long as said opinions are in line with the state ideology being Globalist Cultural Marxism.

Even renowned atheist author Richard Dawkins chimed in on the chastisement of the ‘low information voter’ with a sound clip for Big Think with all of the gloating mental gymnastics one can expect from an academic who’s devoted their life to finding virtue in the promotion of moral ambiguity.

Cultural elites who adhere to and promote the notion that Brexit will go ahead because stupid people had a say in the future of Great Britain need to have a number of questions posed to them to validate such an arrogantly authoritarian ideological stance. First of all:

Who decides when an individual knows enough about any given topic to be able to participate in a democratic process, especially one which saw some of the UK’s biggest number of voter turnout in decades? The establishment elites?

What an extraordinarily flawed premise it is to suggest that one segment of society should be able to decide when a people know enough about a certain issue. It defeats the whole purpose of having a democracy which brings us to the intricately linked second question:

What is the metric with which the establishment decide that an individual has a sufficient amount of information to decide on the issue?

Allow me to hazard a guess: when said individual agrees with the establishment. Correct? Again, what is the point of having a Democracy if one segment of society can override the will of the people simply by suggesting they lack enough information to decide based on the fact that they haven’t drawn the same conclusions as the ruling elite? The lack of self-awareness among our apparent intellectual superiors is utterly astounding and I suggest this is to do with the severe lack of intellectual diversity on University campuses in the West.

The third and final question that should be posed to the elitisst and their thralls is:

Does this premise extend to national elections, meaning I can contest federal or state elections on the basis that a democratic decision is rendered invalid because a significant proportion of the population didn’t know enough about the issues being voted on?

If so, I’d like to contend the recent Victorian election in which a large segment of the ethnic working class in the northern suburbs of Melbourne didn’t know enough about Labor’s twisted gender fluidity policies. Two electorates in the country that saw a big ‘No’ vote from the same sex marriage plebiscite were Western Sydney and North Western Melbourne which are home to a large number of Middle Eastern migrants. The population in Northern Melbourne comprises primarily of a large number of Orthodox Christians and Catholics due to the high density of Greek and Italian migrants to boot. There is simply no way that these electorates would disapprove of SSM while retaining support of the implementation of Labor’s fanatic safe schools program. They are by definition, ‘low information voters’.

Though intellectual consistency is not a high priority among Neo-Marxists it is extremely difficult to hold, on the one hand the notion that a vote like Brexit can be overturned due to low information among voting constituents, and then on the other hand that voting in Australian state elections can’t be overturned on the same premise. At best, one could argue that federal or state elections are more complex and therefore one can be excused for not entirely understanding the vast array of issues on which to decide. Yet this is a really weak position as it fails to comprehend just how little most voters care about politics in general. In other words, if a voter doesn’t care about 80% of what politicians are on about in the first place, why would their position on a single issue matter all that much? Voters pick and choose what they care about and it rarely has much to do with what the Press Gallery want to talk about.

In sum, the notion that the outcome of a democratic process can be overruled on the basis of voters not knowing enough is yet another desperate and ridiculous attempt by a cultural elite to justify their unjust hold on political and economic power. When confronted with these arguments remember to pose these three (and a half) questions:

It’s not difficult to make cultural elites uncomfortable with their inconsistent logic and authoritarian tendencies. Keep up the fight. Make them squirm. Make them cry. Onward with Brexit. Bring back the Commonwealth. 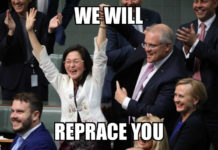