With a federal election in Australia scheduled for 18th May, and with both major parties on the nose with voters, a number of newcomers are having a crack at the title, and the vast majority of them are attempting to run on what could be termed the nationalist right side of politics. Chief among them is Senator Fraser Anning’s Conservative National party. Anning has enjoyed much media attention due to his ability to accurately comment on current events with no regard for prevailing attitudes of political correctness. Couple this with an anti-fragile ability to profit from the attacks of his enemies and he has become the great white hope for what few Australians are left.

Anning has even captured the attention of the nationalist right overseas with his ability to speak truth to idiocy. Roissy is one example of those enamored by Anning with a series of pro-Anning posts that he wrote back in March which culminated in an appeal for Anning to save the USA; Fraser Anning for US president in 2020.

What I stand for:

I have also been very supportive of Anning, and up to this point he really hasn’t put a foot wrong. But unlike the US system of elections, in Australia in order to win power you can’t go it alone, presidential style. You have to dig around and scrabble in the dust for suitable running mates who also have to get across the line. This is the great challenge to unseating the two main parties who have taken turns in tossing the ball back across the net for almost a century. The closest that anyone has ever come was Pauline Hanson 2o years ago when she gave John Howard an almighty scare.

So far Anning has talked a very good game, but as with all things in life it is actions that count. And this week Anning has been found wanting, and depressingly so. Roissy had labeled the following tweet certified fresh:

Fraser Anning’s Conservative Nationals is the only party that will aim to preserve Australia’s predominantly European ethnic composition.

Well, this week Anning announced his team for the state of Queensland, and all I can say is that it looks like he ran out of breath mints. 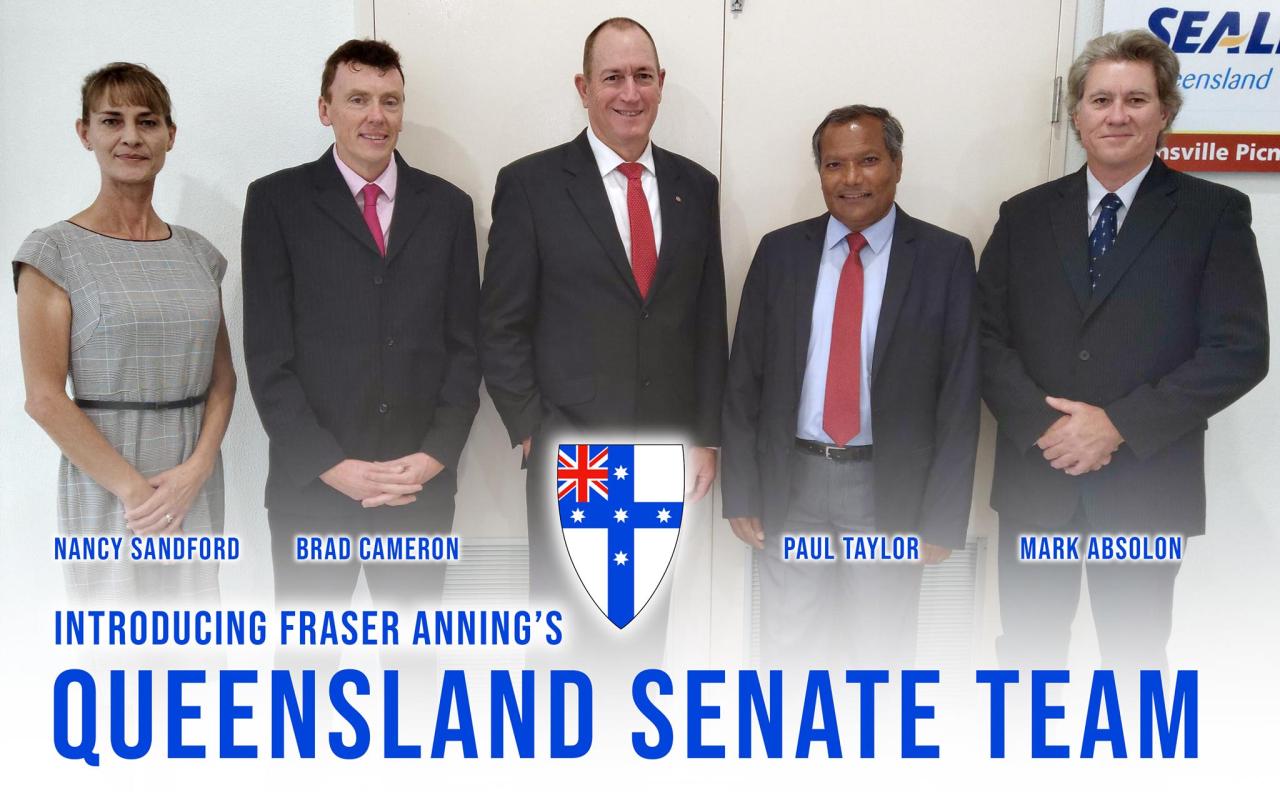 Out of a total of four running mates he has managed to select an Indian and a woman. Dear oh dearie me. Let’s start with the girls, shall we?

I have already written about the need to abolish women from the political sphere.

“Any serious contenders on the Right side of politics in Australia would do well to make a point of not having any female politicians in their ranks. An announcement of the sort that a party not only does not have any female candidates but that they actively make sure that it is a male only domain would generate all sorts of negative publicity in Australia. The media would go barking mad. But any publicity is good publicity as far as politics is concerned, and since voting in Australia is compulsory, (an abomination in of itself), then a party courageous enough to say no more to the forced incursion of women into politics would do very well indeed with the silent majority.

“And a new party is where the battle will have to be fought. The Liberals are lost because they made the mistake of letting in women in the first place. It’s time to found new right wing parties in Australia and their first rule must be that it is a boys club. In other words, no girls allowed.”

Giving women the vote in the first place was stupid enough, but inviting them to sit down and assume responsibility for leading the country has been nothing short of outright lunacy. If there is one single thing that has got our civilization into its present crisis point then it is this. The thing is that most women who I talk to about this privately agree with me. They are all too aware of the collective problems that handicap women in this regard. As on a micro level, they also want to be led on a macro level. And yet here is Anning pushing forward his own attempt to nail down the vote for the womensz. It is simply appalling.

But it is nothing when compared to his decision to run an Indian in the Australian election. Paul Taylor does not have a bio at Anning’s site at this time, but I dug one up from his last tilt at Australian politics when he ran for the Rise up Australia party. Taylor was born and educated in India but moved to Australia 30 years ago. He is of course as about Australian as I am an Indian. But what is worse is his wish to meddle in Australian politics so he can save us from ourselves. There really is nothing worse than immigrants to a nation attempting to impose their own values on their adopted country. I do not care how well meaning they are, as far as I’m concerned immigrants should not only not be allowed to vote but their descendants should be barred from holding office for at least four generations.

But back to Anning. He has talked a big game but when it came time to show his true worth he has been found seriously wanting. There were already warning signs, such as an article he wrote for XYZ Magazine where he referred to the mysterious and very modern cult known as Judaeo-Christianity.

“From the abandonment of a pro-European immigration policy, to the repeal of laws based on Judeo-Christian values …”

Are they those same Judaeo values which supposedly built Notre Dame cathedral? You know, the one that burnt down this week and which Jews around the world celebrated while referring to 10,000 copies of the Talmud which the French tossed in a fire 800 years ago? Doesn’t sound very “Judaeo-Christian” to me.

If you can’t even get the basics of Western Civilization correct then I very much doubt your ability to defend that same civilization.

So it looks as if Anning is a dud. A well meaning dud, but a dud nonetheless. Which means that he is not the answer but simply someone who is preparing the ground for the real nationalists to come. This is a disappointment, but on reflection I suppose that we’re not going to get ourselves out of this mess by half-baked measures. We need men who will fight, (and the two gormless white males that Anning picked don’t look as if they have a slither of fight in them either, for that matter).

We’re going to have to look around for someone else to crush our enemies, see them driven before us, and hear the lamentations of their women.