Have you ever thought about the hours, days and years our Australian normie brothers and sisters sit behind the idiot box or in lecture theatres in open eyed trances, allowing their brains to be penetrated by the most subtle and also explicit conditioning from the richest globalist propagandists in the world?

The first thing you must understand is that just because you are unaware of something does not make it not real. This is very important. You may not be aware of the meme pathogens inserted into your mind but that does not mean they are not there affecting your thoughts, speech and every day actions.

What I’m about to say is not at all radical or unreasonable, but as you read the following paragraphs just be aware of the way you are programmed to react. Just notice the conditioning and let your rational mind prevail. All the billions of dollars spent conditioning you is done primarily to prevent you from reading and understanding the following concept.

The meme pathogen that states ‘Diversity is our strength’ is obviously a lie. Unity is strength while division is weakness.

This goes without explanation. This Diversity Lie has cost Hollywood and the Australian fake news media billions of dollars to instil into our zeitgeist and it has worked fantastically, but being a lie that defies logic and nature it only takes one person to point it out to neutralise a lifetime of brainwashing.

This is the reason why the globalists try to shut down, ban, block, shadow ban and criminalise any dissent against their lies. David with a slingshot of truth can bring down the globalist Goliath by smashing it right between the eyes with the truth. They know this very well. It is harder to get someone to believe a lie then it is to get them to accept the truth.

White people make up only 8% of the global population but every white majority country is being flooded by hundreds of thousands of nonwhites and then forced to integrate and assimilate with them. If ‘Multiculturalism’ and mass immigration continue, white children will go extinct forever. 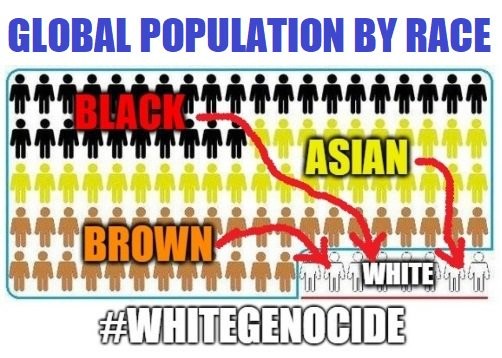 There will still be a billion Africans in Africa, a billion Indians in India and two billion Asians in Asia but all formerly white majority countries will be blended out of existence. ‘Multiculturalism’ is just a code word for White Genocide.

Under international law the Convention on the Prevention and Punishment of the Crime of Genocide states that ‘any attempt to eliminate a group by any means’ violently or nonviolently is genocide and will be punished as such. Even private citizens can be punished for incitement to commit genocide or complicity in genocide.

I suggest that any Australian who advocates for open borders, ‘Multiculturalism’ or mass 3rd world immigration become very aware of the Genocide Convention and cease immediately. There is no excuse for ignorance.

All Australians must diligently keep records of statements made by antiwhites that violates the genocide convention. We can stop White Genocide legally. We must never use any illegal techniques. We have truth science logic, nature and morality on our side.