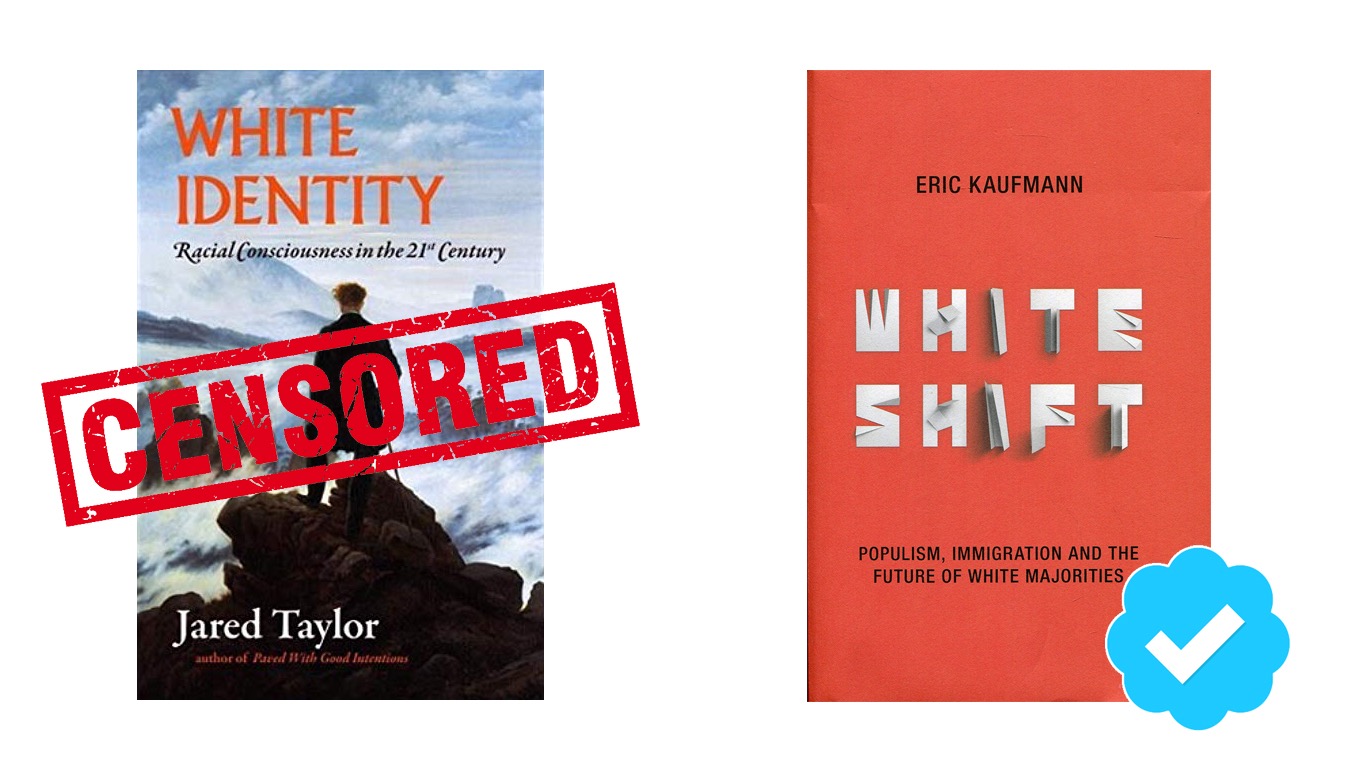 Amazon has long prided itself on a broad policy of not censoring books—until now.

In the last several days, it has banned print and Kindle editions of four books either written or edited by race relations expert Jared Taylor. On February 24, Amazon banned his book, White Identity, a scholarly analysis that argues whites are beginning to practice identity politics in response to forceful racial demands by blacks, Hispanics, and Asians.

White Identity had 134 customer reviews and an average rating of 4.6 stars. Amazon had sold the book since 2011.

Yesterday, Amazon banned Jared Taylor’s collection of essays, If We Do Nothing, and two collections he edited: A Race Against Time and Face to Face with Race.

In all cases, Amazon claimed that the books’ “subject matter” was “in violation of our content guidelines,” but did not explain why. There is no appeals process.

As recently as 2010, Amazon had an unambiguous free-speech policy:

“Amazon believes it is censorship not to sell certain books simply because we or others believe their message is objectionable.” Now, Amazon is deciding which political views are acceptable and which are not.

It continues to sell the bomb-making manual known as The Anarchist’s Cookbook, the Unabomber’s Manifesto, and justifications of terrorism by Al-Qaida, Osama Bin Laden, and Hezbollah. It also sells black nationalist manifestos by Elijah Muhammad, Marcus Garvey, and Louis Farrakhan.

Interesting how books about White Identity, written by Whites, are now being exorcised from the largest e-commerce marketplace, while books aimed at normalising transsexualism to your kids pervades the platform (Magnus Hirschfeld and his collaborator Arthur Kronfeld would be so proud).

Meanwhile New York Magazine late last week was promoting a book titled “Whiteshift” by Eric Kaufman (dubbed “what the Right is reading” by the magazine). Park MacDougald, who wrote the review, characterises Kaufman as “being one-quarter Latino and one-quarter Chinese” (although neglects to mention that Kaufman’s father is Jewish).

Whiteshift is a sprawling tome. More than 500 pages long, it includes detailed chapters on the history of immigration politics and policy in North America and Europe; the rise of contemporary anti-racism norms; patterns of white social and residential segregation; and long-term demographic projections on the future racial makeup of Western societies. The book’s title refers to Kaufmann’s prediction that over the coming century, Western countries will become majority mixed-race due to migration-driven demographic change, but that these mixed-race majorities will continue to identify with “white” symbols, cultural markers, and myths of ancestry…

Ultimately, Kaufmann argues that the best thing would be to accept a moderate form of white identity politics as a more benign alternative to contemporary populism, which in his view is merely a sublimated form of ethno-nationalism. That can sound, written out, as a sort of brief for white nationalism-lite.

I question how Kaufman foresees ‘majority mixed-race’ Western countries continuing to ‘identify with “white” symbols, cultural markers, and myths of ancestry’ when these ruthless, cosmopolitan, international, globalist elite are systematically removing White academic voices on White identity from the marketplace.