At least, that’s what you’d think if you still believe the lying media.

As millions of Australians still do. 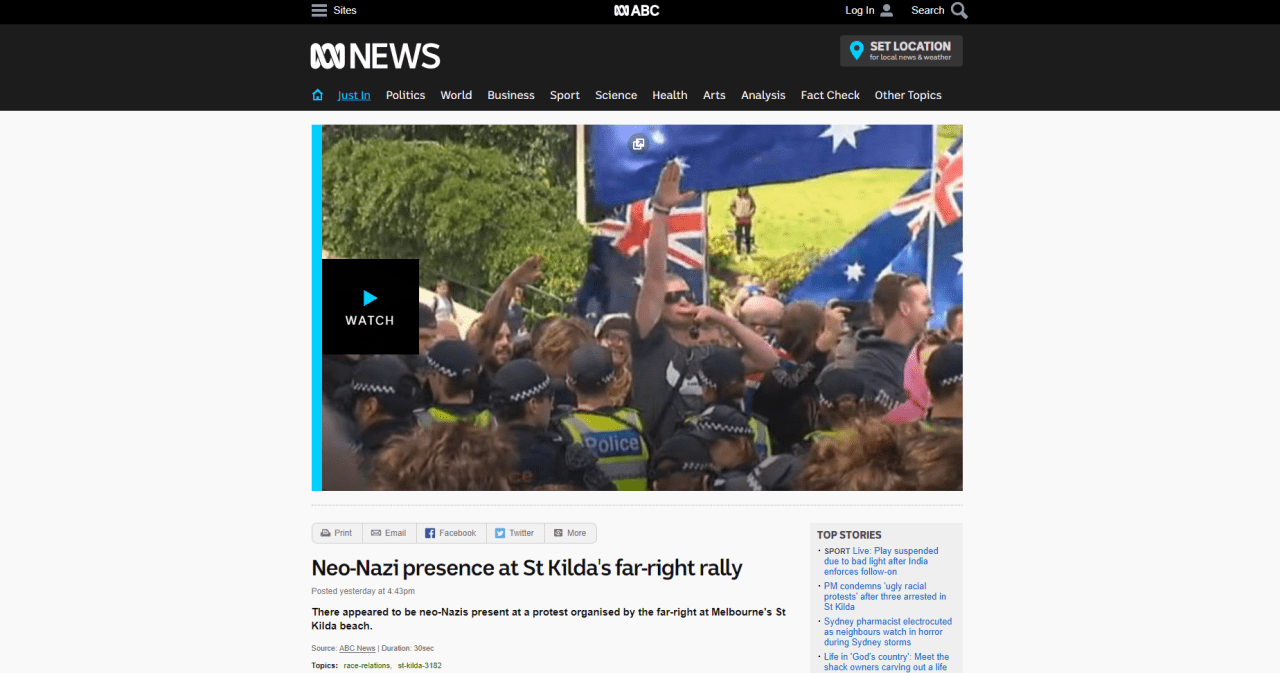 The compliant, brainwashed zombie hordes of postmodern proles tweeted out the establishment’s talking point, just like they’re trained to.

Where are Australia’s #RSL representation on this abhorrent behaviour from white #nazis supremacists and Fraser Anning?
your silence on this is deafening? #StKildaNazis

Hey @ScottMorrisonMP, your silence on this issue is deafening. As our national leader you need to condemn it unconditionally. Or are you happy there are actual Nazis marching on our streets? #auspol #libspill #naziscum #stKildaPicnic #StKildaNazis #StKilda pic.twitter.com/hWFUpooLs0

Saddened that neo-Nazis walked though our streets

Appalled that a Senator joined them

Kudos to those who PEACEFULLY said no to neo-Nazis

Lest We Forget #auspol

My grandfather and the men of Australia’s 460 Squadron in Bomber Command, 1943. They dropped more bombs on the Nazis than any other unit and only 1 in 6 made it home. They did not stand beside them, or fail to condemn them. These are the men Fraser Anning betrayed. #stkildanazis pic.twitter.com/dFS4ndRSR9

The whole ‘diggers fought the Nazis’ meme misses entirely that, until the 1970’s, Australia had an explicitly white nationalist immigration policy. But who cares about facts when you’ve got the entire neo-Marxist education-media-political complex on your side?

Jewish communist commentators turned the kvetching up to 11, of course.

Senator Anning should check with his consitiuents whether attending a #Neonazi rally would be OK with them as “official business”.
And would be handy to get the PM’s view on this too.
#StKildaNazis #auspolhttps://t.co/yhWSVKomee

Thank you @ScottMorrisonMP, @billshortenmp for calling out Neo-Nazis marching in the streets of Melbourne. Hatred has no place in Australia or around the world.

“We should call out this rally for what it is, and it is a demonstration by a neo-Nazi group” @drkerrynphelps says political leaders need to do more to combat a rising tide of anti-Semitism and neo-Nazism pic.twitter.com/oN39zWLTZ2

And that crazy-eyed watermelon lady took the opportunity to say Senator Fraser Anning is a Very Naughty Boy who should be sent outside to sit on the bagracks whenever the other senators take a vote.

The Government should refuse to take Fraser Anning’s vote in the Senate after he has shown again he is unfit to be in the Parliament. Hanging out and supporting with neo-nazi who are inciting violence is inexcusable.

And, while Senator Anning and the boys who organised the event were taking so much heat, the NPC’s were helped along with this establishment talking point by some of the ubermenschen attending the St Kilda rally. 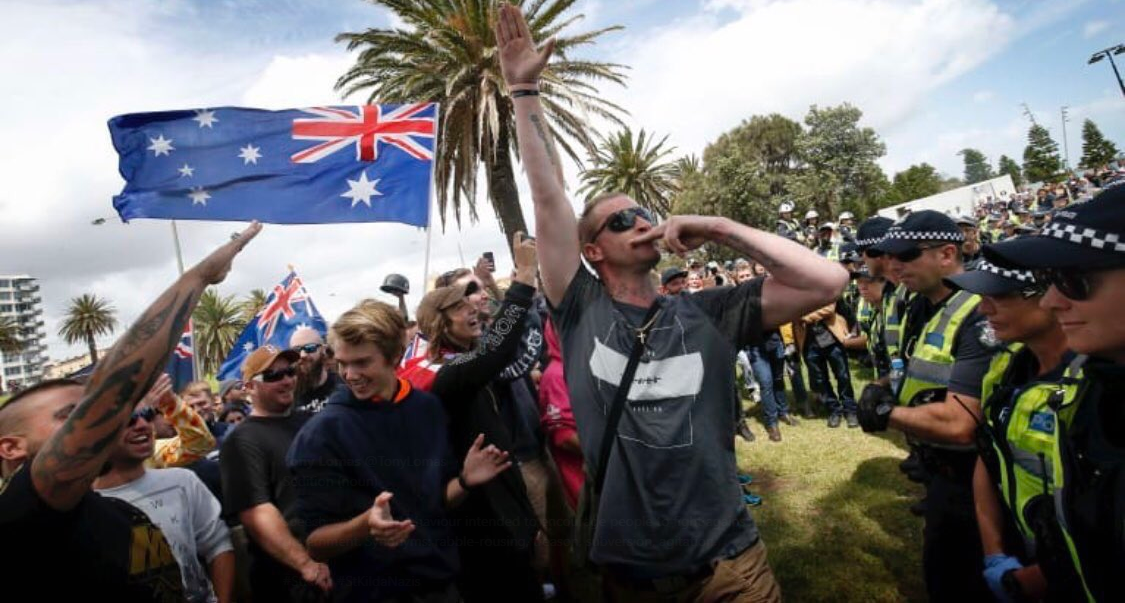 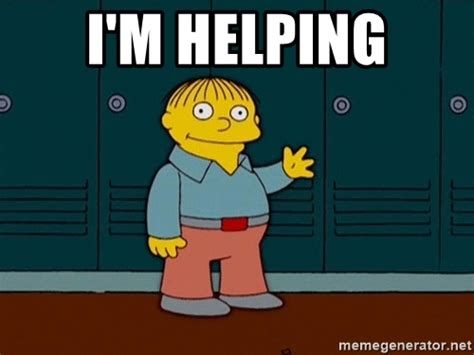 Senator Fraser Anning turned up to show support for Neil Erikson’s event, along with Blair and the Lads, and these fat, slovenly grubs throw up the Roman salute for the MSM photographers.

It’s too stupid to be stupid. As far as I’m concerned, after Charlottesville and the cringe-fest of the Heimbach debacle, if you’re still doing the Roman salute at public rallies, you’re either being paid by our enemies or you’re retarded.

I’ll give these fools the benefit of the doubt.

This low-IQ stupidity has to stop. Go be a Hollywood neo-Nazi somewhere else, fatboi.

And get some exercise.

The organisers of the event had made it clear: This was about protecting Australians and drawing attention to the inaction of the Victorian government and police in dealing with marauding gangs of African savages on our streets.

So racist mate, especially the representatives from the Vietnamese community who joined the rally to condemn the violence they’ve suffered at the hands of African immigrants. But I suppose you have to obey your corporate overlords, and say what they tell you to say, right Scomo? pic.twitter.com/aoSCBDhPLs

Multiculturalism was never about creating a utopian ‘melting pot‘ of races. It was about destroying the white, Christian civilisation that our forefathers built and brought to this continent through millennia of struggle, toil and hardship.

It has been an act of war against our people carried out by deception and tyranny, and it has worked.

The lying media’s job has been to ensure that normies don’t hear that message, because if they do, they might start to think. And notice.

The problems being highlighted by the event organisers go far beyond black vs white. Although demographic replacement of whites has been the objective of the Western Marxist establishment now for decades, this great betrayal goes far beyond just flooding our homelands with indifferent or hostile foreigners. The goal of this agenda has been our utter destruction, and the ultimate enslavement of all humanity. This has been a religious objective by a Satanic cabal which our forefathers warned us about. It was also prophesied in the Bible (Revelation 2:9, 3:9).

The same group of people who pushed so hard for non-white immigration after the war, and increasing numbers of so-called ‘refugees’ in recent decades, also spread moral relativism, degeneracy, perversion and shallow materialism into our culture. They propagandised the postwar Baby Boomers to embrace hedonism and moral lawlessness, destroying the Western family in the process. These Western Marxist intellectuals convinced the Boomers and Gen X that the traditional family unit was a petri dish for fascism, and so must be destroyed in order to prevent another HolocaustTM. This paved the way for the atomised society we have today of mothers working full time and infants being raised as wards of the socialist state.

They have been mocking and degrading white men in their movies and TV shows for so long now that we see it as perfectly normal to hold white men in contempt, and idealise non-whites in contrast. White men are only fit to be buffoons, bullies or morons. Not only has this destroyed the prestige of white men around the world, it has debilitated young white males in developing positive and healthy understandings of their role in society. This process has been going on for a very long time.

The power of this group comes through their control of the global financial system. Since the 1600’s, this group have been systematically establishing central banks in every country of the world, and using their private control of those seemingly public institutions to farm the workers of the world and use the power of the state whenever their human cattle become unmanageable. They engineer the boom-bust cycle which inflates assets, expands private and public and debt and then forecloses on the world when the bubble has reached its maximum proportions. This liquidation process is in its early stages in Australia, yet again.

They have used this financial power to take control of political parties across the Western world, and beyond. Through control of the media and entertainment industries, they are able to deploy leverage over politicians and senior government officials to steer the ship of state in a direction of their choosing. They have been doing this for a long time. In recent decades, this influence has increasingly been used to ensure Western support for endless wars in the Middle East and lavish welfare for their ethnostate homeland. All who would rise to senior political office in Australia know that you must first kiss the ring to gain the blessing. 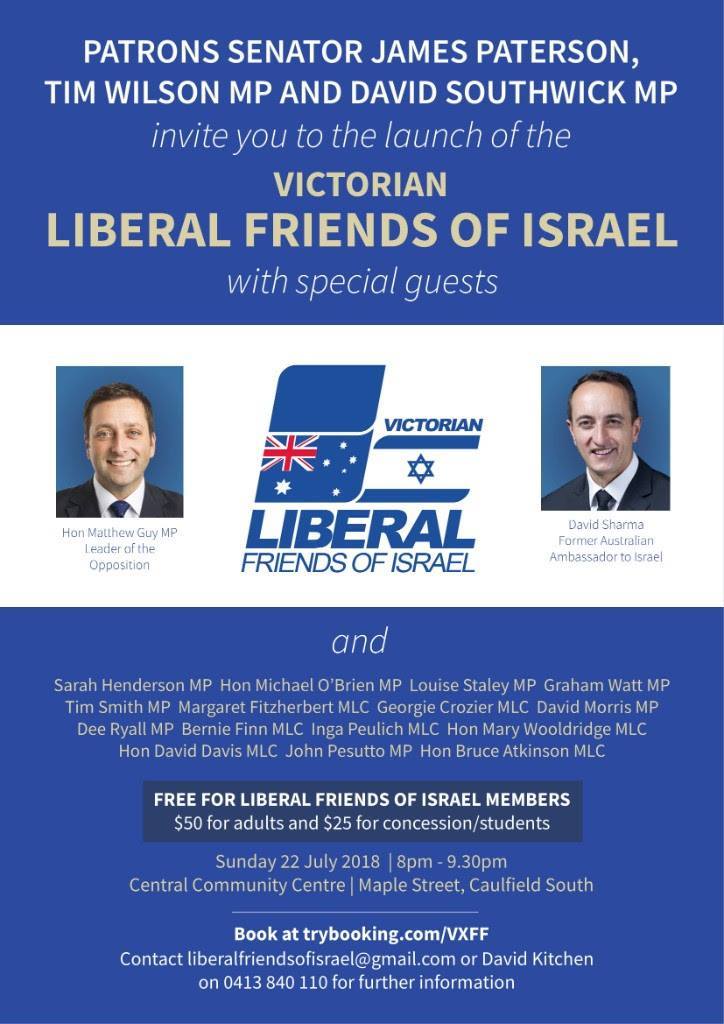 Is there a Friends of Bangladesh event? Mexico?

Not content with control of the mainstream media, this group also has control over the alternative media. Jewish journalist Andrew Breitbart established his site with Zionist money, while Jewish homosexual Matt Drudge and Jewish millionaire Ezra Levant use their massive influence over the dissident right to steer the movement toward hatred of Muslims and support for Israel. Alex Jones, whose ex-wife and children are Jewish, pointedly ignores any in the truth community whose research has led them to criticism of Israel.

As I can’t say often enough, my argument is not that the enemies destroying our country are ‘the Jews’. It’s not that simplistic. Jews themselves, particularly lower and middle class Jews who have only known the lies they were indoctrinated with at synagogue and yeshiva, are also victims of this cabal and its mentality of supremacism and hatred. They’re still stuck in a mental shtetl, taught to fear and hate the goy. There are many other brave Jews, however, who stand against the Satanic cabal and its global network of violence, corruption and tyranny.

These people hate other Jews just as much as they hate us. This is the common struggle of all humanity, and as a Christian, I know it is also a spiritual struggle. We can fight back by speaking the truth and restoring the moral law of God in our own hearts, for a start. All peoples of the world have an interest in this, as all of us have been demoralised by the financialisation of life, deracinated by the ideologies of rootless cosmopolitanism and made depraved through cultural perversion. All of us have lost, and what’s happened to whites is in various stages of happening to every nation and tribe in the world.

This isn’t white vs black. This is good vs evil, the people vs a morally bankrupt and vicious elite who want total control over our lives.

Food For Thought – Axis Of Anti-Semitism