George H. W. Bush died last week. Like the establishment right he represented, he lingered longer than he should have.

Tributes to George Bush poured in from both sides of the aisle on Saturday morning. “George and Barbara Bush are together again now,” said the Obamas. https://t.co/Euz4RfTQAN

Your sins will be read out in front of all creation one day, George, before you are thrown into the eternal fire by a righteous God.

George Bush Snr was an arch-hypocrite of the type which rise to power and high status in our decadent and degenerate era. He was a man who moralised to the American people, and the world, about drugs while president, when he had overseen the CIA’s drugrunning activities as director and US vice president during the 70’s and 80’s. He played a key role in the mid-70’s in enabling China to access American technology and capital after Kissinger opened China up to ultimately become America’s geopolitical rival. He was a traitor and a liar his entire life.

Normies would dismiss all that as a ‘conspiracy theory’. They’re meant to do that. It’s a phrase the CIA weaponised, after all.

And George Bush Snr was Mr Conspiracy. After all, he’s the guy who took the New World Order mainstream.

He gave that speech on September 11, 1991. 9/11/1991, ten years exactly before 9/11/2001. But that’s just a coincidence, because thinking that the world is run by a Luciferian cabal who believe in numerology and practice a mystery religion based on Freemasonry, Kabbalah and Aleister Crowley-style Satanic rituals would be just plain crazy, right?

Bush I first used the phrase ‘New World Order’ in January of that year when announcing the commencement of Operation Desert Storm.

That ‘credible’ United Nations he mentions is slated to be built in Jerusalem after the third, and final, world war. And his use of the phrase ‘peace and security’ should raise eyebrows among Christians. The Bible told us that this would be the phrase people would be saying in the Last Days just prior to God’s wrath being poured out on the world (1 Thessalonians 5).

What is now dismissed by those still under TV mind control as conspiracy theories was actually a very common way of thinking until the postwar era, particularly among the Christian right. The American Revolution was fomented by pamphlets citing a conspiracy by the British King to establish the Church of England in the colonies, and fueled popular resistance to the monarchy. The French Revolution was the same, as was the Russian. The elites fear ‘conspiracy theories’ for good reason; they know that when the populace can establish ‘alternate’ (i.e. real) facts to replace the official narrativeTM, it’s not long before the mob goes all Yellow Vest on the Rothschild puppet in charge.

Taxes are always the catalyst for rebellion and revolution, but loss of faith in the establishment is the pre-requisite. And this is why the lying press will always seek to discredit ‘conspiracy theories’.

Until the 1980’s, many people still investigated the shadow elite and financial control of the political class. Throughout the 1970’s, books such as None Dare Call It Conspiracy and Carroll Quigley’s Tragedy and Hope and organisations like the John Birch Society fueled a populist, anti-establishment political right which saw America being destroyed by Jewish communist influences. Senator Joe McCarthy’s investigations were part of this trend. It was driven by outrage from traditional Americans at what European-style socialists, Marxist intellectuals, rootless cosmopolitans and international financiers were doing to their country.

These people were pushed out of the Republican Party in the US throughout the 1980’s, however. They came to be known as the paleoconservatives. The group who pushed them out of the establishment right in America was a group of former Trotskyite Jewish Marxists called the neoconservatives. They have controlled the establishment right in America ever since.

Well, until now. It isn’t just the Bushes who are dying. Neoconservatism is dying too.

BREAKING: Multiple sources tell me that neocon magazine @weeklystandard is expected to close its operations in a few weeks. It had lost many subscribers since the 2016 election as its #NeverTrumper editors @BillKristol @stephenfhayes @SykesCharlie publicly aligned with the Left.

On both sides of the stage-managed political dialectic, the hegemonic ideologies of the last 40 years are collapsing. Cultural Marxism is reaching its peak in the cultural revolution against straight white males with movements like #MeToo, and neoconservatism is dying after Trump’s election campaign. The neoliberal consensus of post-Soviet globalism is being pushed away. The old world order is being allowed to die, to make way for the new.

A dissident nationalist right and a dissident ‘democratic socialist’ left are emerging to replace the dying paradigm.

Are these also controlled movements? Sure, in part at least. You don’t really think the cabal would just let things happen of their own accord, right? The money power always seeks to influence and corrupt rising popular movements. It’s what they do.

Look out for public figures popping out of nowhere trying to direct your anger away from those who have power and toward useful scapegoats, such as Muslims. Such people are not to be trusted.

Neoconservatism served its purpose, and now it’s being wound up. It pushed the traditional Christian right in America toward Ron Paul and out of the Republican Party, and it hijacked US military might to smash up the Middle East for Israel.

The death of neoconservatism and the Never Trumpers would be something to celebrate if it had happened twenty years ago, before 9/11, the ‘war on terror’ and the destruction of the American empire. The final nail in the coffin of the 500-year Western hegemony will be Israel’s war with Iran within the next two years. How that doesn’t lead to World War III against Russia and China is hard to see. Everywhere around the world, there is too much debt, too many government promises and not enough taxpayers.

The geopolitical poker table is being thrown in the air, and guns are being drawn. War is coming. Order out of chaos.

Establishment conservatives are scrambling to make sense of the chaos and carve out a place for themselves in the post-neoliberal, nationalist right. One such is Tony Abbott. Writing for uberboomer blog Quadrant, Abbott reckons the challenge for politicians is to re-discover the political centre while enthusiasm for limited government wanes among the public. Or something. 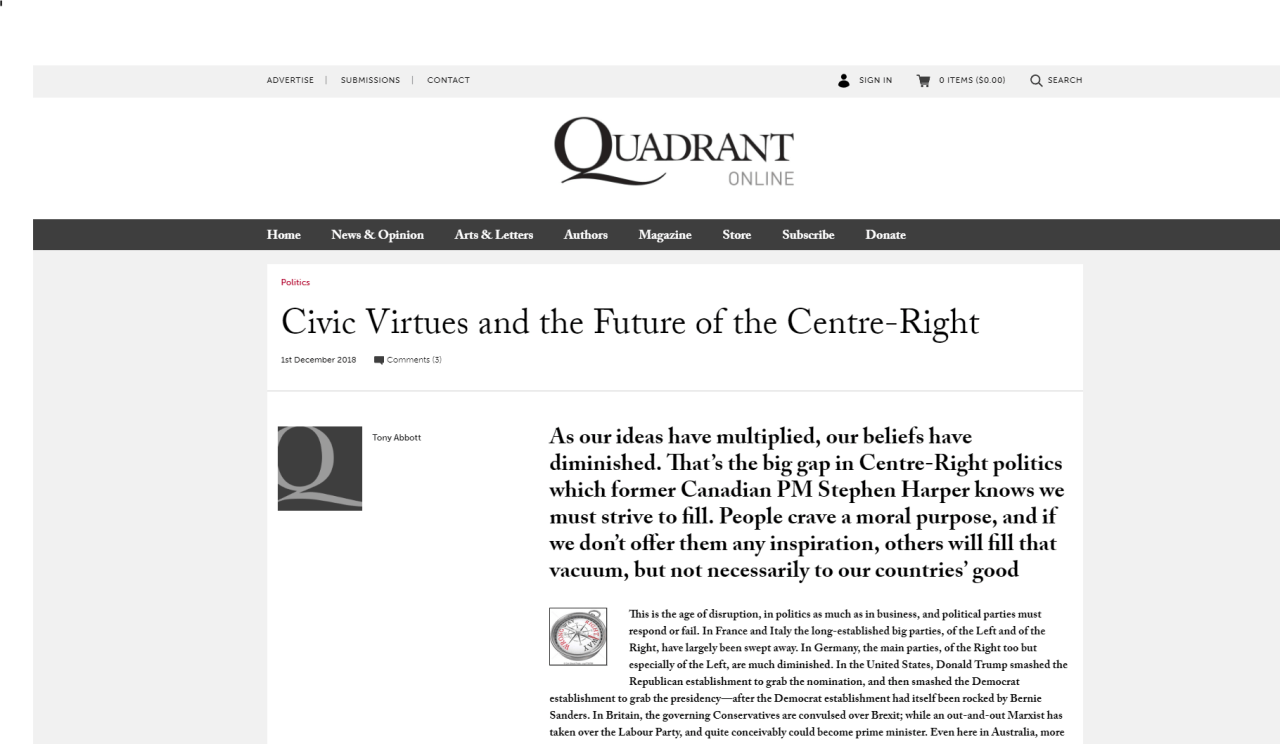 In the lingo of Quadrant readers: tosh, piffle and balderdash. Or just bullshit to you and me.

As minister, PM and backbencher, Abbott did nothing to constrain the growth of the Leviathan state which has devoured our economic future. Conservatives never limited the size and scope of government.

If they had tried, they would have had to actually fight the socialists. And if there’s one thing we know about conservatives, they don’t do fighting. It’s too… undignified.

The neoconservative takeover of the political right, here as in the States, mirrored the cultural Marxist takeover of the political left. Both the right and the left became fake; their rhetoric and purported concerns did not align at all with what they were actually doing. An example from the right in Australia is John Howard presenting himself as some champion of nativism by crowing that ‘we will decide who comes to this country, and the manner in which they arrive’.

The same bullshittery prevailed on the left. Pre-Frankfurt School concerns for the welfare of the white American, Australian or British working family were replaced by concerns over Latinx trans-lesbos smashing the glass ceiling imposed by the mythical patriarchy.

The fake left and the fake right, both creations of Jewish intellectuals, enabled the neoliberal consensus of the last 40 years, which in turn enabled the financial enslavement of the globe by the Jewish banking elite funding both sides. This is the consensus that Rhodes scholar and establishment rightist Tony Abbott is seeking to restore. Globalists like Abbott want to return to the easy days of the 90s, when there was enough gravy in the political trough for the fake left and the fake right to gorge themselves, hidden in plain sight by a compliant and compromised media.

Those days are over, Tony. As you said in your piece, referencing Yeats, “Things fall apart”, so it seems, and “the centre cannot hold”. Yes, they do. You missed the rest of the stanza though.

“Mere anarchy is loosed upon the world,
The blood-dimmed tide is loosed, and everywhere
The ceremony of innocence is drowned;
The best lack all conviction, while the worst
Are full of passionate intensity.”

The blood-dimmed tide hasn’t even started yet, Tony. It will come though. It will come thanks to the duplicity, cupidity and complicity of men like you. The fakery of both left and right has created an economic, demographic and geopolitical powderkeg waiting only for a spark to create the final Gotterdamerung of the West.

And while the conservatives search for that ‘sensible centre’ again, we disappear, and our spiritual and historical enemies cackle with glee.

It was always a race war, conservatives, even though you prevented us from fighting it. It is a race war, because the people who started it don’t just hate our values or our freedoms or our way of life. They hate our race.

And they have millions of footsoldiers.

This is the mixed race Mayor of Bristol. She has decided to replace the paintings in the city hall. She removed the ‘dull and dated’ paintings and replaced them with this garbage. pic.twitter.com/ERiUfipKg4