Baby It’s Cold Outside may be banned now because suddenly it’s a rape anthem, but if you’re living in the northern hemisphere, baby it’s cold outside. Very cold.

You are not dreaming Toronto. One of the coldest fall stretches, will it last? 🥶
https://t.co/sjJqAGrRIi

Record snow pummels southern US, killing one and leaving hundreds of thousands without power https://t.co/nh6UUpLAkL

Working on a story in Greensboro, NC where a warehouse storing cars collapsed due to the amount of snow on the roof. @accuweather @breakingweather #accuweather #Snowmageddon2018 pic.twitter.com/XU1TJSZZaB

That warehouse isn’t in Canada. The Carolinas are in the South. Greensboro is about the same degree north of the Equator as Melbourne is south of it.

Beijing has had one of its coldest December days ever, while snow hit coastal Shanghai. The cold front has also slammed Korea. 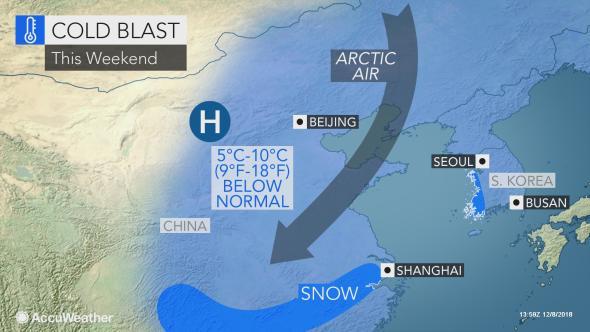 I can remember, when I lived in South Korea about 15 years ago, the temperatures started to get really cold around Christmas and stayed that way until the end of February. That’s changed now.

-9C in Seoul in the middle of December is insane. It’ll be down to -11C in Pyongyang. People are gonna die.

Well, even more than they usually die in North Korea.

As I have written before, 2018 is the year the Grand Solar Minimum really kicked in. By 2020, it will be undeniable. You can hold me to that, dear reader.

Temperatures will continue to plummet globally until 2024, when we get a brief reprieve. Then the transition will begin again in earnest by 2028, and by the early 2030’s we will have entered a mini ice age.

How long that mini ice age will last is uncertain. It will last for the rest of our lifetimes though, for sure.

The lying media has started to address global cooling and the Grand Solar Minimum, but as usual, they misrepresent what it is by setting up a straw man and then setting fire to it. They focus on solar irradiance and the effect of reduced solar output on the overall energy levels hitting the Earth from the sun, and argue that these are too insignificant to offset anthropogenic global warming. This is a trick.

The astrophysicists and space scientists who have identified the effects of solar cycles on Earth are saying that the mechanisms which drive our climate on Earth are far more sophisticated than this. It is not difficult, however, to understand how global cooling is happening if we are open-minded about the evidence they are putting forward.

A Grand Solar Minimum is a period of reduced energy output by the sun, yes. This can be measured by using sunspot observations, and the number of sunspots which have appeared on the surface of the sun in 2018 is effectively nil. This is the steepest rate of decline of solar output for the last 9300 years.

But carbon warming will more than offset the decline, right?

The decline in solar output corresponds to a collapse in the Earth’s magnetosphere, a protective barrier against radiation from outside the solar system. Increased cosmic rays penetrating the atmosphere lead to increased cloud cover, thus reducing temperatures and increasing rainfall events. Higher levels of cosmic rays hitting the planet also lead to stronger and more frequent volcanic eruptions. These are just some of the mechanisms by which the reduced solar output creates global cooling on Earth, particularly in the northern hemisphere.

Down here in Australia, we should be much better off. The primary risks for us may be a tsunami of refugees as the SHTF in the northern hemisphere, glaciers in Tasmania and the Australian Alps, an overall reduction in rainfall away from the coasts and changes to climate zones in different regions. Given that civilisation has only been here for 200 years, and the last Grand Solar Minimum was 400 years ago, no-one knows exactly what will happen.

I can hear the autistic screeching from normies still in thrall to globohomo mind control even before I publish this piece. No matter what you’ve heard from Al Gore, Bill Nye, Neil “Cosby II” Degrasse Tyson, the ABC, SBS, Fairfax, the Guardian and every academic in the country, we will not be experiencing global warming. They’re wrong.

We are living in a time of incompetent expertise. It is a symptom of our imperial decadence, and a cause of our imminent collapse.

We are ruled by lunatics.

These people have been indoctrinated into particular ideologies, and when reality shows their beliefs to be bogus, perverse and toxic, they double-down and lie. They attack anyone who points out their stupidity and hypocrisy. And because these people control our government, media, entertainment complex and education system, they get away with it.

The biggest lie of all, in terms of how much suffering it will cause in the coming decades, is that of anthropogenic global warming. You will not be able to learn anything of use from establishment sources about what’s really coming, or how to prepare.

Although our elites, the middle managers of globohomism, are ideologically controlled, the decision-makers at the top of the globalist pyramid structure are not. I believe these people are cold and calculating in how to achieve their goals, and these are the people who concocted the global warming myth, despite knowing that an ice age was coming.

Why would they do something so evil?