Every year 1.05 billion dollars of your tax money goes to fund the ABC.

Basically, you could keep a whole lotta blokes very happy for a very long time with 1.05 billion dollars. And instead, the government steals it from us to pay for shit like this.

I’d rather take the Commodores.

The creeping globohomoist anti-bloke hate we’re seeing openly spew from the SBS and ABC these days has been there for a long time, but it was subtle. Movies which portrayed men as flaky and subservient and powerful wimminz as all-conquering and wise. TV series which showed kids outsmarting their flat-footed, lame dads. Kids’ programming which mandated that all animations had to portray a collection of different animal species co-operating for Big Sister-approved eco-challenges. The omission of news stories which didn’t fit the narrative that white men are bad and that the future is a mulatto genderfluid plumber who does cagefighting in zhe’s spare time.

Now, the subtlety is gone. The open cultural revolution which began in earnest with the election of Trump has now entered full Bolshevik territory with the farcical testimony of Professor Christine Blasey Ford at the Kavanaugh hearings last week. And it’s becoming increasingly obvious even to mildly left-wing normies that these radical identity communists care nothing for political dialogue anymore. It’s a war.

It’s a cliche that the first casualty of war is the truth. But it’s a cliche because it’s true. 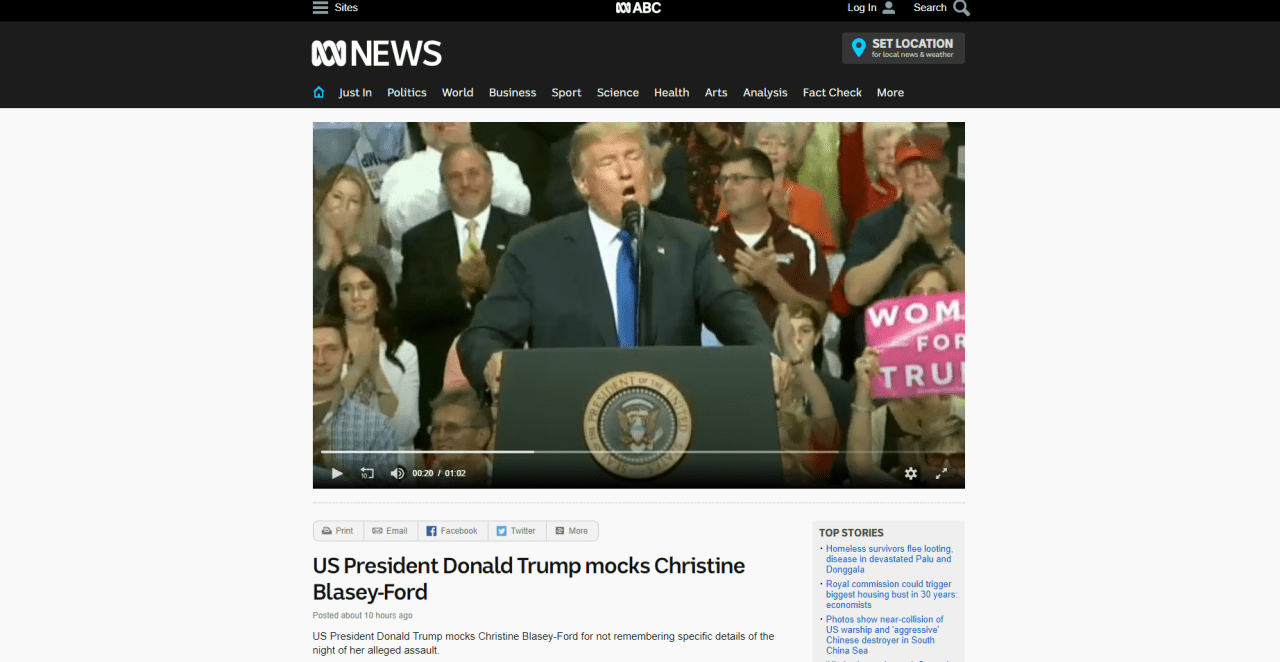 She lied. The bitch lied. She sat there with her ridiculous glasses, childish mannerisms and little-girl voice and with her forked tongue she lied through her damn teeth. Everything about the way that woman behaved showed that she was lying. Here’s a moment-by-moment analysis by a body language expert showing as much.

What is most infuriating, however, and alarming, is that the leftists don’t care. They know. They know she and the other accusers of Judge Brett Kavanaugh are opportunistic liars, and it makes them support those women more. Many conservatives and normies are shocked at this. I’m not, because I’ve known for a very long time that, as well-meaning as some of them might be, leftists are people of the lie.

There are evil people on the right and in the political centre, sure, but the left is different. The left is the force for revolution, for inversion, for chaos. They look on a world that has wounded them, treated them unjustly and not given them what they deserve. They see a world that is unfair. And that, at its most basic and most primal, is the mentality of Satan.

Satan’s primary motivation is to be worshipped as God, and we know that just prior to the return of Christ he will be, for a short time. The neo-Marxists destroying America are willing footsoldiers in that diabolical plan, although it will destroy them just as much as him, in the end.

These people, despite most of them not knowing it, are of their father the devil, a murderer from the beginning, not standing in the truth, with no truth in him (cf John 8:44). This is why they hate Christians so savagely. It’s why they always lie, they always project, they always redirect, they always play the man and not the ball. They can’t help it, and for as long as they remain in that cult of aggrieved victimhood, they will continue to do so.

Brett Kavanaugh was allowed to be angry. Dr. Ford wasn’t. Women grow up hearing that being angry makes us unattractive. Well, today, I’m angry – and I own it. I plan to use that anger to take back the House, take back the Senate, & put Democrats in charge. Are you with me? pic.twitter.com/c9DebKTQEV

House Minority Leader Nancy Pelosi said Democrats are not going to push to impeach Kavanaugh if they retake the majority in the midterm elections. https://t.co/IkIRTfRuew

Interesting read on the toxic political culture surrounding the Kavanaugh appointment and what it says about men and women in power https://t.co/IaejHcsbcK

.@JacindaArdern was applauded by world leaders as she demanded global action on gender inequality in a powerful speech to the UN. pic.twitter.com/mEZ3bXi3JN

All these people do is lie.

I’m glad centrists and normiecons are now seeing the true nature of the left. Bring it on. This will create the reaction from the right that we need in order to restore order. I don’t believe it will lead to a regime like we saw in Germany in the 30’s and 40’s; we don’t have a generation of veterans and a society which has been through the Great Depression. Yet. But we will see leaders emerge who will crush the head of the leftist snake and put these people back in their place. And it will be glorious.

Before then, however, the left will move beyond lies. Their dreams of a post-Christian, post-white, post-male diversitopia are falling apart. The people don’t want their toxic cult of victimhood anymore. Soon no-one will listen to their lies.

And then, if the pattern of history is correct, they’ll resort to murder. And they won’t be able to stop themselves.