Since 2016, our society has been going nuts about Nazis and Jews. As a Bible-bashing God-botherer, I’m not surprised. The Bible says that, just prior to the end, the issue of Jerusalem will make the world go crazy.

And it’s sure feeling very end-timesy these days.

As I’ve argued before, our culture has been given a neurosis about Nazis. You only have to look at the comments section on any news website, including this one, to see that.

It’s really weird. Why is anyone not of the far left in Australia today being called a Nazi by the campus thugs? And why are so many young Aussies identifying themselves as Nazis? That makes no sense at all. Those guys are all dead in a village in Argentina by now. We may as well start calling each other samurais, or Vikings. 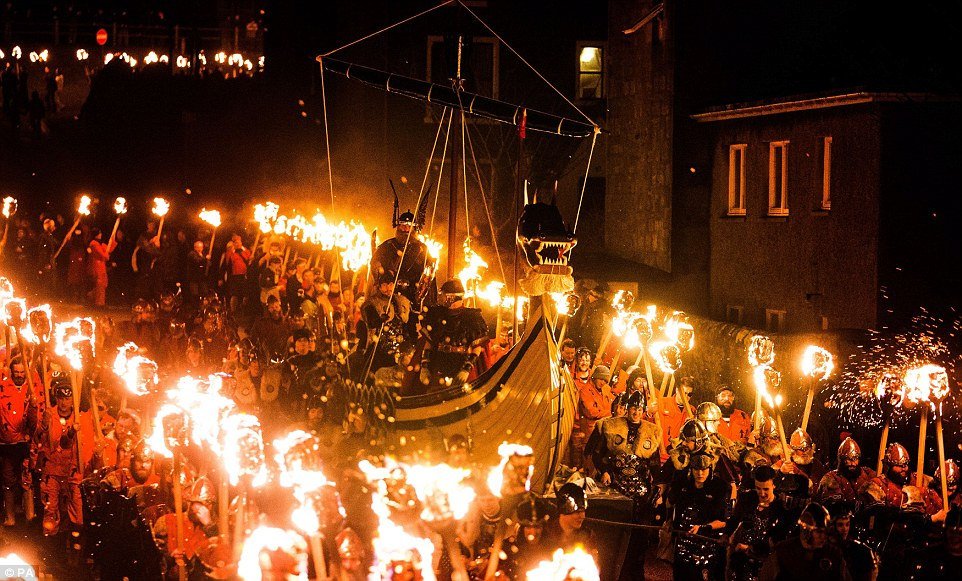 Vikings actually makes more sense now I think about it. Calling people Nazis makes no sense at all.

This is happening, of course, because ever since the New Left Western Marxists took over our campuses in the late 60’s our kids have been taught that the Nazis were the clearest example of the true nature of white men. Whites will always become Nazis unless we suppress our heritage, disband our families and hand our lands over to the swarthy hordes. We must exterminate ourselves to prove we are not literally Hitler.

Nazism, and the Holocaust, are the key ideological motif behind cultural Marxism, globalism, multiculturalism, third wave feminism and the great cuckening of the West. On campuses today, Nazism is taught as the clearest example of pandemic Western bigotry. Problematic whiteness. Toxic masculinity.

Through this program of intergenerational brainwashing, our neo-Marxist caste of campus radicals have convinced the majority of young whites that our direct ancestors were evil proto-Nazis, stealing land from indigenous peoples and enslaving the world. 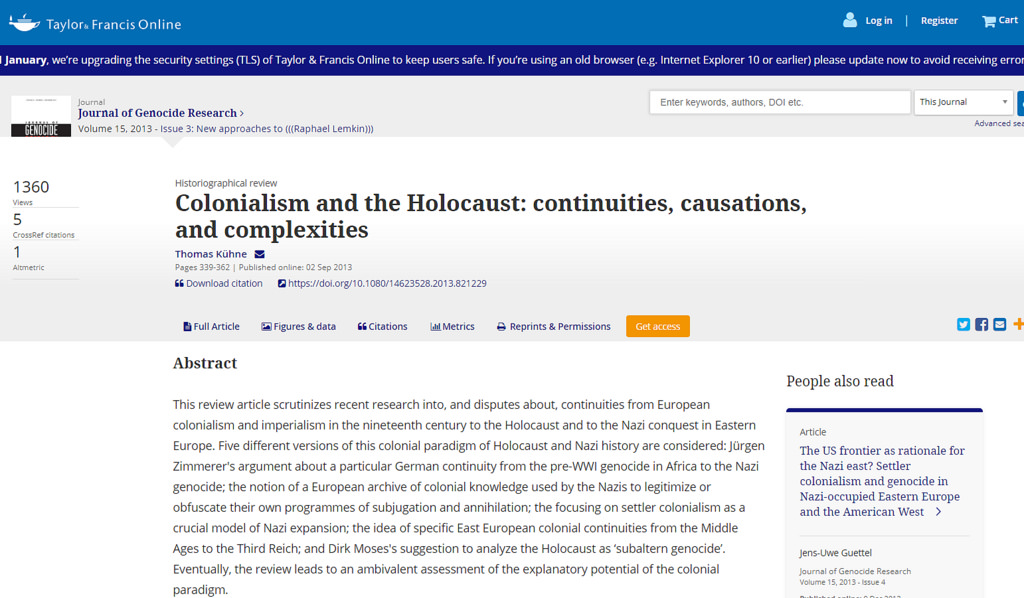 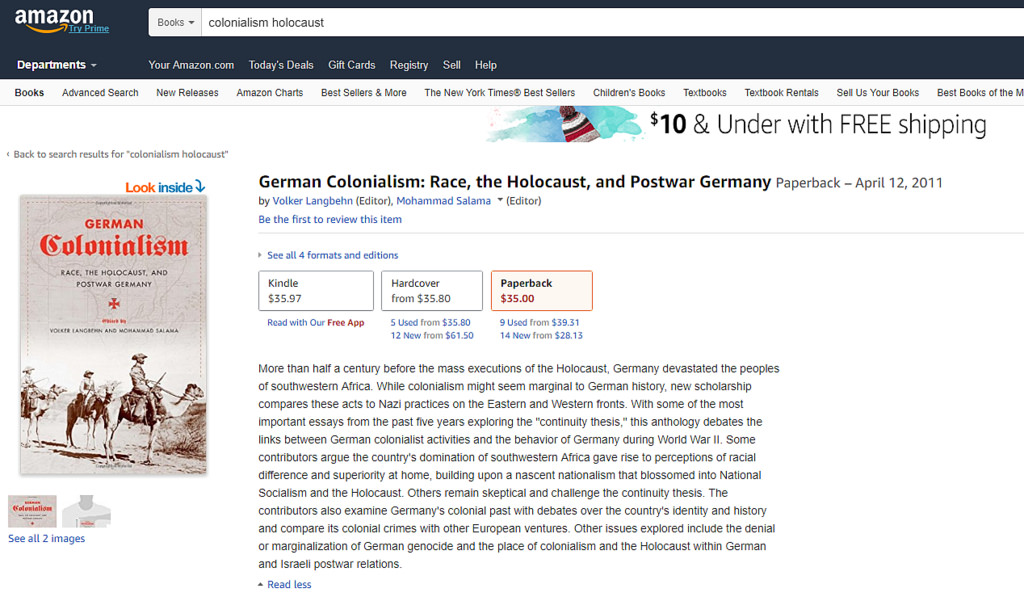 That narrative is a lie, and a very dangerous one. I’d prefer not to write about Nazism, except that it is the poison source of political discourse in the West today. I’d absolutely prefer not to write exposing the ethnic supremacism rife within the Jewish community in the West, except for the toxic influence of cultural Marxism on our campuses and Zionism on our foreign policy.

This really matters. Not talking about it only helps to drive frustrated young men into the arms of some real Nazis. And that seems to me to be exactly what some Zionists want. It was the National Socialist regime and (real and imagined) events in the Holocaust which led to the formation of Israel in the first place. Why change a tactic when it worked so well the first time?

If you want to understand why white young men are being driven toward National Socialist ideology, you must be willing to honestly face the anti-white bigotry of some in the Jewish community and the role of Zionist influence in our societies.

You must also be willing to honestly consider why the pagan then Christian West and its Jewish inhabitants have been at each other’s throats since at least 70AD.

The Jewish and Nazi propagandists agree about that, actually. Jews have been hated by Europeans since the time of Nero. Jewish bankers in the Middle Ages were despised for their practices of usury. Jews have been expelled more than 100 times from more than 100 countries, usually by a royal edict after ethnic tensions reached a fever pitch. Edward I expelled them from England in 1290, and they remained banished until Cromwell let them back in 1657.

Jewish bankers have long been accused of using their financial power to bring about debt enslavement and central banking in Europe and, later, the world. Current widespread beliefs about the Rothschilds and their clients in the financial oligarchy are simply the latest in that tradition. There have long been suspicions of ritual sacrifice in some elements of Kabbalistic and Talmudic Judaism, which then passed into secret societies such as the Knights Templar and Freemasonry. Martin Luther, the father of Protestantism and founder of Lutheranism, wrote a book in 1543 called ‘On The Jews and Their Lies’. The Protocols of the Elders of Zion was read by millions in the early twentieth century, before parts were exposed as being a forgery. From Russia to the United States, in the lead-up to the Second World War, there was considerable vitriol directed against Jewish bankers and Jewish influence. Men such as Henry Ford and Charles Lindbergh in the USA devoted considerable amounts of their time, energy and fortunes railing against international Jewry.

It wasn’t just Hitler. Aversion to Jewish influence was near universal prior to the Nazis. And it hasn’t gone away since. Even isolated Guatemalan villages in recent years have expelled Jews. 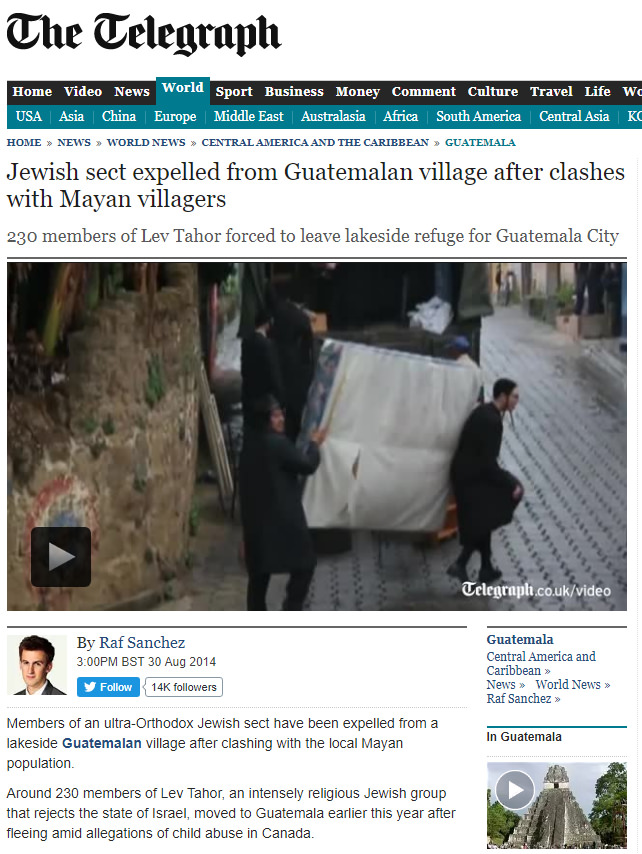 The hatred has flowed just as much the other way, too. The Frankfurt School was just one example of the anti-goy bigotry alive and well among elements of the Jewish community. Whether you think the cause of this mutual enmity is economic, biological or spiritual (as I do), you can’t honestly deny that it exists.

And if we keep denying it, we’ll keep making more Nazis.

What really makes a Nazi is the realisation that much of one’s life has been a lie. For the young German men who joined the National Socialist German Worker’s Party in the 20’s and 30’s, it was the belief that international Jewish bankers had betrayed Germany in World War I and that the nation had been ‘stabbed in the back’ by traitors in November, 1918.

What is making young Western males today turn to updated forms of National Socialist ideology is the belief that everything they learned in school about the evils of white men was a lie created by international Jewry to subvert and destroy Western nations and forever shatter the goyim.

I don’t go for such simplistic narratives myself, but there is a growing legion of young whites who do. And the far left, who are wrong about everything else, are right about at least one thing.

Ignore this growing legion of Hitler worshippers at your (and our) peril. If you don’t believe me, look what it did to Germany. Their boys once were destined to rule the stars.

Now they sit down to pee. 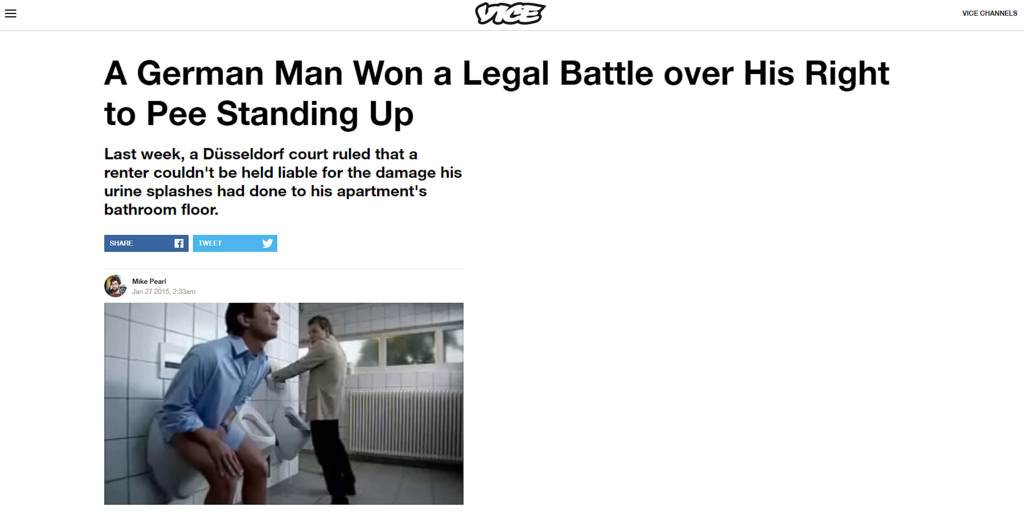 This is the type of horror we could face if we get this issue wrong.

Unfortunately for us, anti-Western lobby groups like the Executive Council of Australian Jewry (ECAJ) are helping to prove the narratives of postmodern National Socialism correct.

The ECAJ are the Australian parallel to American lobby groups like the Anti-Defamation League (ADL – a pro-defamation organisation) and the Southern Poverty Law Center (SPLC – funded by rich New York Jews).

These groups regularly post hate lists and propaganda targeting anyone to the right of Trotsky as an evil proto-Nazi. They’ll even go after other Jews who aren’t committed to their globalist, neo-Marxist and anti-white agenda.

They portray the alt-lite, alt-right, alt-white and alt-reich as a spectrum of beliefs which must be opposed with equal violence. Anyone who doesn’t hate white people is literally Goebbels to them.

The ECAJ does the same thing here. Their 2017 report, in which I featured, is basically a list of Everything Jewish Supremacists Don’t Like. It’s treated with the same gravitas as a CSIRO report by the government and MSM.

In her recent ABC article ‘The Rise of Australia’s Activist Far Right: How Far Will It Go?’ Julie Nathan, the Research Director of the ECAJ, shows just how hyperbole and intellectual dishonesty feed the toxic dynamic between left and right extremism in this country.

In Julie’s world, there is no such thing as ‘Australian’ culture. As usual, whites have no real ‘culture’. I bet Julie even uses quotation marks around the word ‘white’. It’s a standard form of ethnic gaslighting common from the far left fringe.

By far-left fringe, I mean a peak lobby group which receives funding from the Australian government, accolades from politicians and fawning international media coverage.

Julie lumps in civic patriots, nationalists and racialists as the ‘far right’. I guess then Julie would have to acknowledge that Australia’s far right is a few blokes on the internet, while Israel’s far right is the government?

Julie then goes through the usual targets of the far left’s hysterical vitriol: Blair Cottrell, the Party for Freedom, the Rise Up Australia Party and Reclaim Australia. Nationalist Alternative and Antipodean Resistance also get a look-in. All of them are tarred with the same brush.

There is no evidence for Julie to draw on of ‘far right’ violence in Australia. There’s been some postering, some online posts and some LARPy campers. That’s it. In Julie’s world, though, Kristallnacht is just around the corner.

There is one group in Australia which routinely engages in political violence, though: Antifa. These homeless AIDS distributors regularly engage in threatening harassment campaigns to get people fired and kicked out of their studies, dox people online and encourage violence against them, destroy property and put iron bars through people’s heads at protest marches. How does Julie describe them?

Of note is the hard-left response to the far right. Antifa (short for “anti-fascist”) is a collective term for streetwise anarchists and socialists who engage in “direct action.” Many of them look for inspiration to iconic anti-fascist historical events, such as the Battle of Cable Street (1936) in London and the Spanish Civil War (1936-39).

In a reversal of roles, it is now Antifa activists who promote violence through such memes as “Punch a Nazi,” and who encourage physical violence against anyone they deem to be a fascist or Nazi, whether they are or not. The Antifa socialists see themselves as mounting the barricades in glorious defence of Islam and Muslims, mosque and burqa, and against the far-right bogans and bigots. Both groups typically spoil for a physical fight with each other.

Are you fucking kidding me? Romantics gloriously defending diversity? How does Julie sleep at night?

I guess this is exactly the type of intellectual dishonesty you’d expect from an ethnic supremacist. We tend to expect truthful speech and conduct because we think the rest of the world is universalist like us. They’re not. We’re the odd ones, and truth doesn’t matter when you’re #fightingthefash, hey Julie?

Julie’s whole life is devoted to demonising white people. For Jewish supremacists like Julie, proud whites are all Nazis and Jews are every group in the world suffering from our oppressive, patriarchal tyranny. 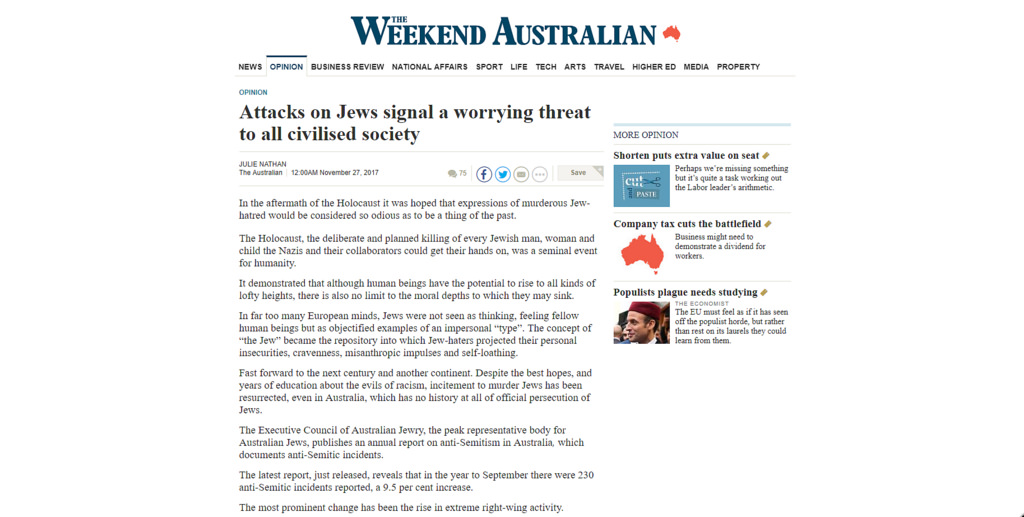 This equation of Jews with all the minorities suffering from toxic white male culture has got to stop. Gays are not Jews. Aborigines are not Jews. Refugees are not Jews. The Palestinian kids getting white phosphorous down their oesophagus are not Jews. The brown, huddled masses of the unable-to-develop world are not Jews. Jews are not a special category of humanity. This is a type of thinking characteristic of ethnic supremacists, and most closely resembles the mentality of the Nazis Julie hates so much.

If a lot of people really don’t like you Julie, maybe the problem isn’t them? 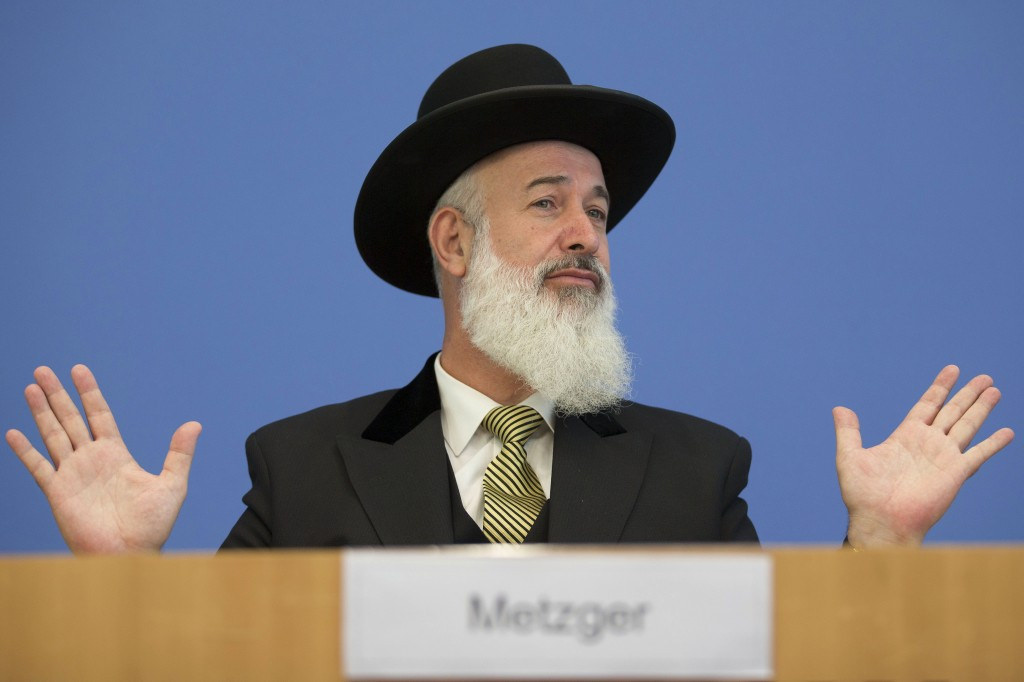