It’s probably the craziest thing you’ll read this month; maybe even the most mind-irritating thing you’ll read ever. That’s because you’re about to see the utterly compelling and impossible-to-dismiss evidence that Emperor Donald Trump is a time traveller. 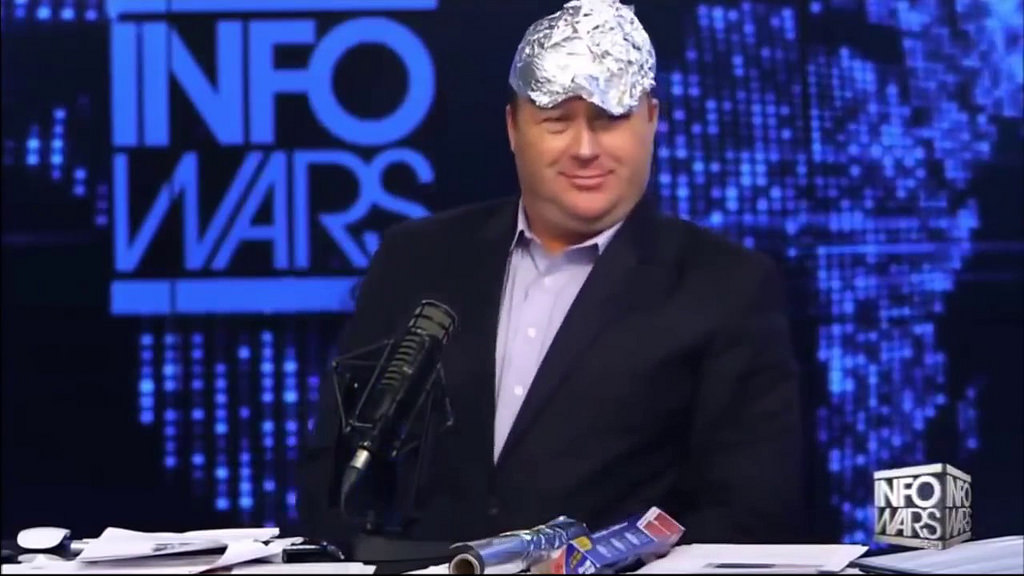 Strap in. It’s a wild ride. 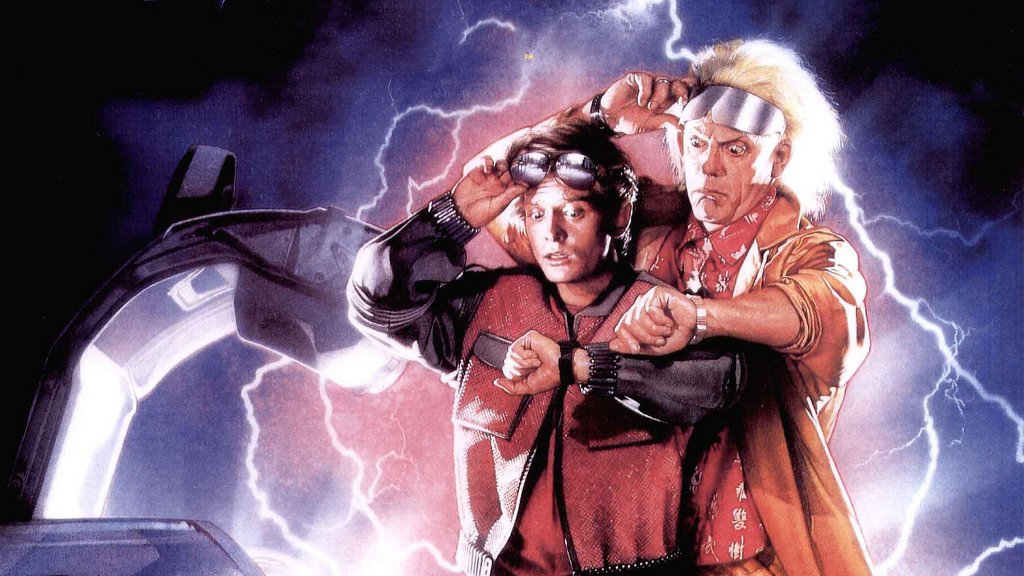 The coincidences around Trump’s election are familiar to all of us who participated in the Great Meme War of 2015-16. The chaos magic which gave rise to Pepe the Frog and kek is widely known even outside of 4chan culture.

If nothing else, it’s the first time a presidential candidate has spawned an entire youth subculture. 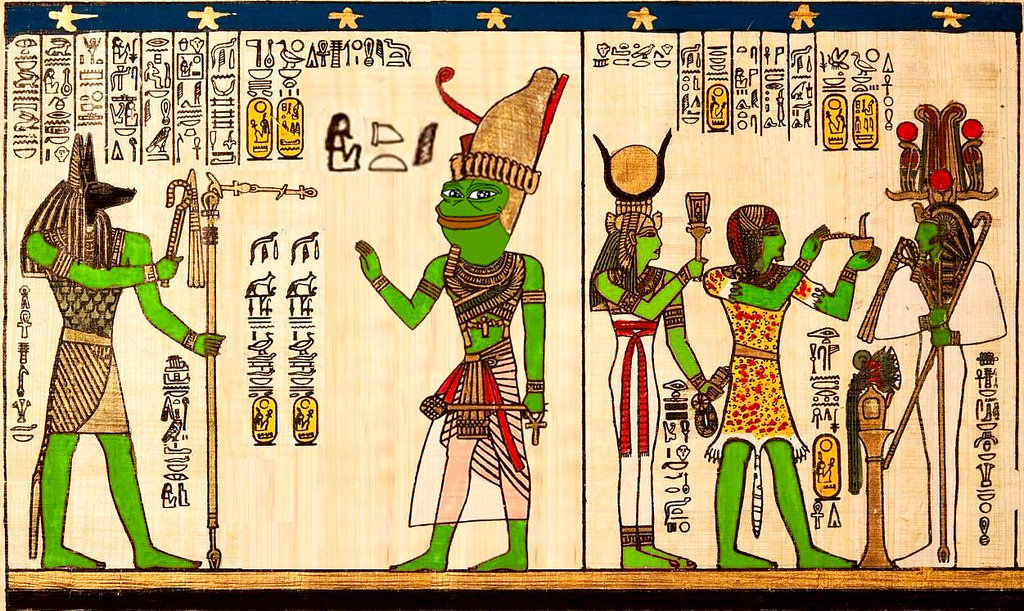 It’s also the first time that a presidential campaigner delivered pretty much the same speech he’d been saying since the early 1980’s, with the only change being that Japan was replaced with China as the Asian powerhouse taking advantage of America’s stupidity.

Trump’s ambitions to run for the White House had been widely discussed by talk show hosts and journalists since that time. This isn’t sufficient to explain, however, how eerily prescient the Back to the Future movie series was about Trump’s rise to power.

In one of the future timelines in Back to the Future II, set in 2015, Biff Tannen has used his knowledge of the future through a misplaced Sports Almanac to accumulate a massive fortune. He then uses his wealth to build lavish casinos, creating a vulgar dystopia and becoming the most powerful man in America. 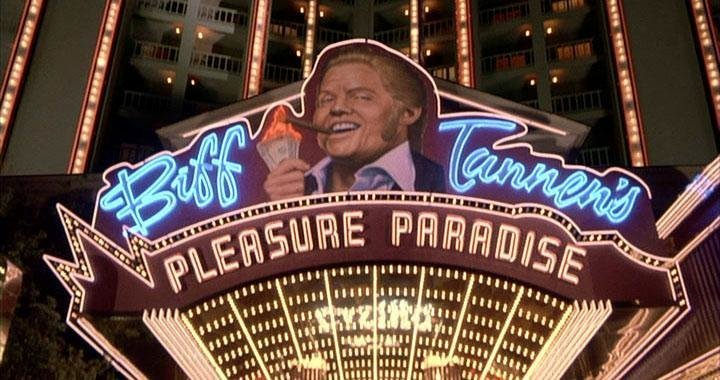 This picture of a lawless hell ruled by an orange-haired, thrice-married, narcissistic, casino-owning billionaire is pretty much what every leftist sees when they look out the window these days.

In the movie, the Chicago Cubs also win the World Series. Trump became president and the Cubs won for the first time in 108 years in 2016, one year later.

Even Michael J. Fox was shocked.

Only off by a year, not bad. Congrats @Cubs. This is so heavy. #FlyTheW

And one of the writers of the film has admitted that the character of Biff Tannen was based on Donald Trump, 30 years before any of those things happened.

It’s interesting too that the day Doc and Marty travelled to in the future was October 21, 2015, in order to prevent Marty’s son from making a mistake which would destroy the family. It has since been revealed that October 2015 was when Trump originally planned to drop out of the race, but on the 21st he declared at a rally in Iowa that he was “not going anywhere”. On that same day, the Washington Post ran a piece asking if it was time to concede that Donald Trump was likely to win the GOP nomination.

October 2015 was also when leftists started to focus on violently disrupting Trump’s rallies. The fake news reports it the other way around, but we know the truth.

So there are eerie parallels in a Hollywood movie about time travel, changing timelines and saving the world from a character based on Donald Trump. That could just be a series of coincidences, right?

This is where it starts to get weird.

In the 1890’s a New York lawyer, diplomat and journalist named Ingersoll Lockwood wrote three books which were not a commercial success, or at least not for 127 years. These books were discovered by users on 4chan’s /pol/ in mid-2017 and have left people stunned.

Even the three fat pussies at Snopes couldn’t deny that what you’re about to read is true.

The books are called ‘Travels and Adventures of Little Baron Trump and His Wonderful Dog Bulger’, ‘Baron Trump’s Marvellous Underground Journey’ and ‘1900: or, the Last President’. 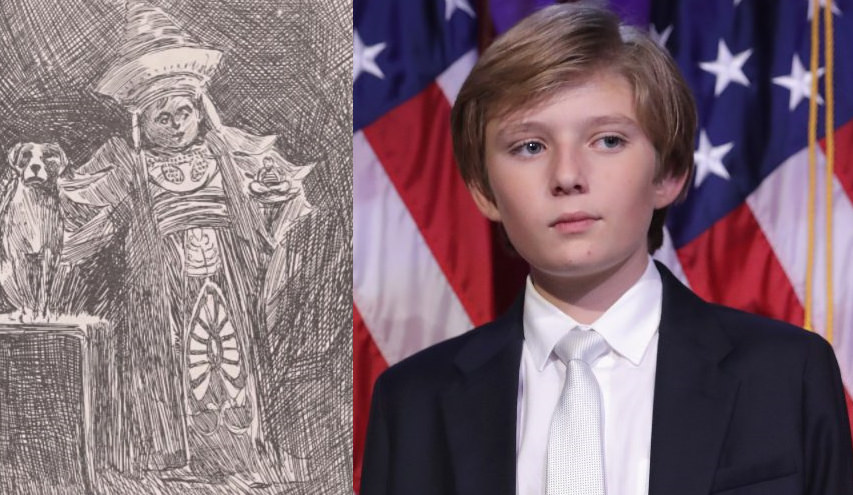 Prior to moving to the White House, President Trump’s son Barron lived in Trump Tower in New York. Trump Castle was a property owned by Donald Trump, though, in the 80’s and 90’s.

In the stories, Baron Trump is given a manuscript by his father which outlines the path for his journey. The writer of the manuscript is named Don, and is described as “the master of all masters” who can lead little Baron Trump to a “world within a world” (page 7).

In the books, there is no record of little Baron Trump’s death; instead he travels to the future.

This is the setting for the last book, ‘1900: or, the Last President’. In the future, the story begins with the election of a President Bryan who opposes the bankers and the establishment and is a champion for the common man.

This leads to an anarcho-socialist uprising on November 3 in New York City which targets the Fifth Avenue Hotel.

“The entire East Side is in a state of uproar,” police officers shouted through the streets, warning city folk to stay indoors for the night. “Mobs of vast size are organizing under the lead of anarchists and socialists, and threaten to plunder and despoil the houses of the rich who have wronged and oppressed them for so many years.” – Ingersoll Lockwood, ‘1900: or, the Last President’

Does that remind you of anything?

The Fifth Avenue Hotel is no longer standing. There is a residential building standing on the site, however.

The date of November 3 is also interesting. The date for the next presidential election is November 3, 2020.

In the story, President Bryan chooses as his secretary of agriculture a man named Lafe Pence.

President Bryan then presides over an unsuccessful currency reset. This would have been familiar to readers at the time as a reference to the gold vs. silver money debates which raged across the United States during the 19th century, and particularly in the 1896 election. The Wizard of Oz was later written as an allegory of how a silver money standard would have relieved the debts of the common people during the 1890’s depression and recalibrated the economy away from the interests of the money elite, who favoured the gold standard.

The most famous event of the 1896 presidential election was William Jennings Bryan’s ‘Cross of Gold’ speech, in which he railed against the bankers and the heavy debt burden the gold standard enforced upon the common man.

Bryan was unsuccessful in his attempts to become president in real life, however Ingersoll Lockwood chose his name for his future president. The 1896 presidential election campaign marked the end of the silver money movement, and with the establishment of the Federal Reserve and then Bretton Woods we’ve been first on a limited gold standard and later on a petrodollar standard ever since. The days when, as in the 1830’s, President Andrew Jackson stood up to the bankers, brought in hard money, closed the central bank and repaid the national debt are long gone.

Interestingly, President Trump was very vocal about seeing his presidency as following in the footsteps of Andrew Jackson. 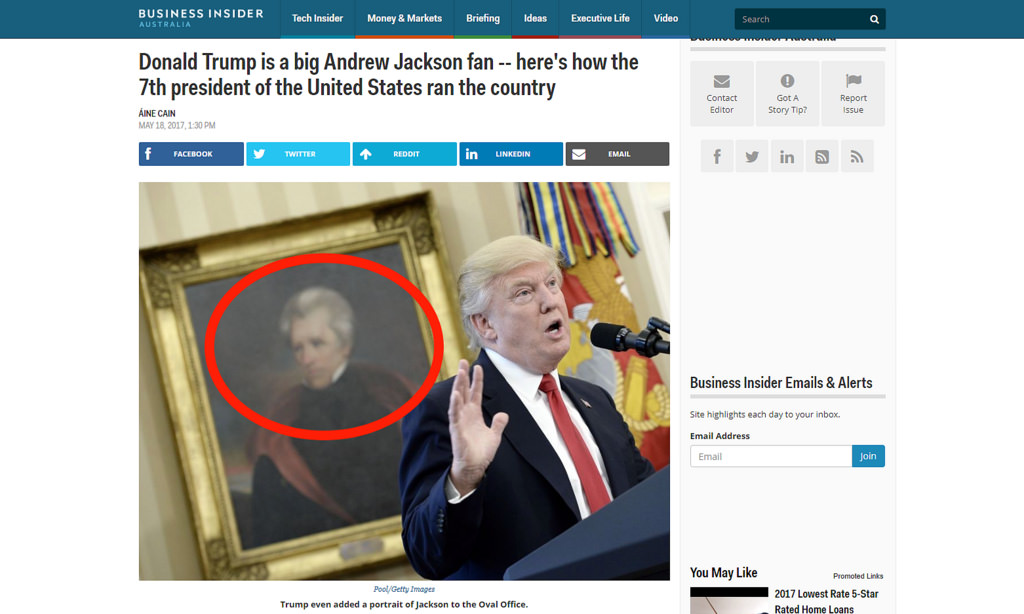 Does President Trump know that a currency reset is coming?

In Lockwood’s tale, President Bryan’s currency reforms fail and, within two years, the anarcho-socialists are back in the streets rioting again. The anarchist uprising turns (as you’d expect) to terrorism, and the leftists end up blowing up the Capitol during Bryan’s State of the Union address.

This leads to the dissolution of the United States, with the States dividing between North, South and West. In an eerie throwaway line, Lockwood describes that the fall of the Republic is “pleasing to a single devilish eye” (p.43).

Will the anarcho-socialist resistance movement against Trump deepen as the economy deteriorates? Will Antifa terrorists ultimately destroy the USA?

Such a scenario became more plausible on Thursday when a Washington, D.C. court exonerated all the J20 rioters for destroying shops and terrorising the city in a massive hissy fit when Trump was elected. Not surprising, really, given that more than 90% of the swamp-dependent citizens in DC voted for Hillary.

That’s not the bottom of the wormhole yet though. Now it gets really weird.

At the same time and in the same city as Ingersoll Lockwood was writing his prophetic stories, Serbian immigrant and scientist Nikola Tesla was developing his astonishing inventions. These inventions include radio, the AC motor and rotating magnetic field, the Tesla coil, remote control, fluorescent and neon lights and hydroelectric power. Elon Musk named his electric car company after Tesla as his engines rely upon Tesla’s work.

There has long been speculation, however, that Tesla made many other discoveries which were not released to the public. These include free energy, antigravity, invisibility and yes, time travel.

Investigating that topic will take you really quickly down the stranger paths of the interwebs. One of the theories is that Tesla’s work was used for the 1943 Philadelphia Experiment, in which the USS Eldridge was teleported from Philadelphia to Norfolk, Virginia, and the crew either disappeared, became stuck in the walls of the ship or else went crazy.

It was the subject of a 1984 feature film, which incidentally was produced by New World Pictures. 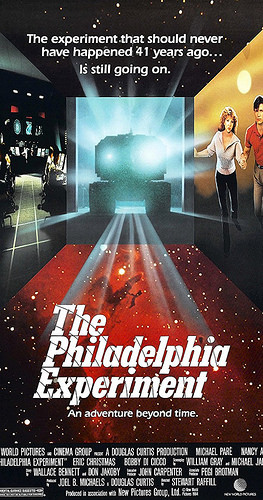 It was also supposedly the forerunner of the Montauk Project, which was used as the basis for the Netflix sensation ‘Stranger Things‘.

Regardless, when Nikola Tesla died in 1943, his work was considered sensitive enough that it was seized by the Office of Alien Property. This was despite Tesla having become an American citizen.

His papers and materials were then given to a prominent MIT electrical engineer and military technology researcher John G. Trump.

Donald Trump has spoken fondly of his uncle, to whom he was very close. He has also stated that his uncle talked to him about many things ahead of their time.

There are other coincidences around Trump’s rise to power which are odd, to say the least. In his 2000 book ‘The America We Deserve’, Trump wrote the following:

I really am convinced we’re in danger of the sort of terrorist attacks that will make the bombing of the Trade Center look like kids playing with firecrackers.”

“We’re not playing the chess game to end all chess games anymore. We’re playing tournament chess — one master against many rivals. One day we’re all assured that Iraq is under control, the UN inspectors have done their work, everything’s fine, not to worry. The next day the bombing begins. One day we’re told that a shadowy figure with no fixed address named Osama bin-Laden is public enemy number one, and U.S. jetfighters lay waste to his camp in Afghanistan. He escapes back under some rock, and a few news cycles later it’s on to a new enemy and new crisis”

There’s also the very strange imagery on the Illuminati playing cards. This game, developed in 1982 and updated in 1995, has scenes which are frankly quite frightening for our time. Not only did the cards seemingly predict the death of Princess Diana… 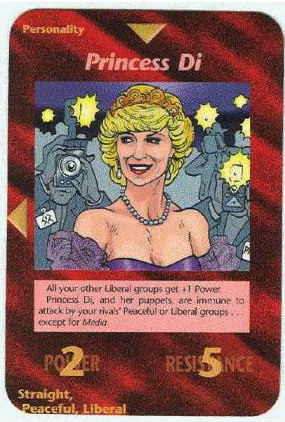 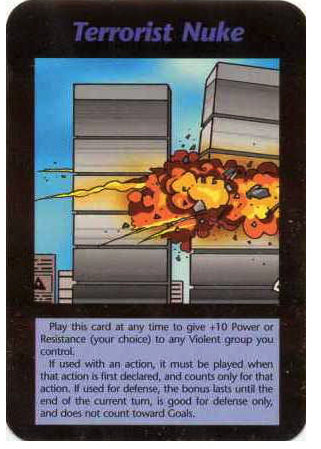 Trump’s war with the deep state… 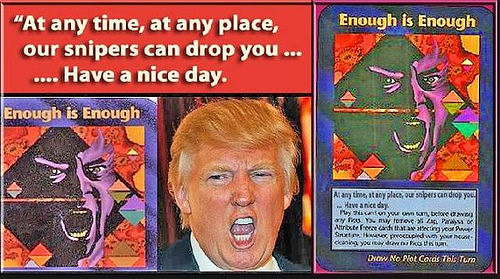 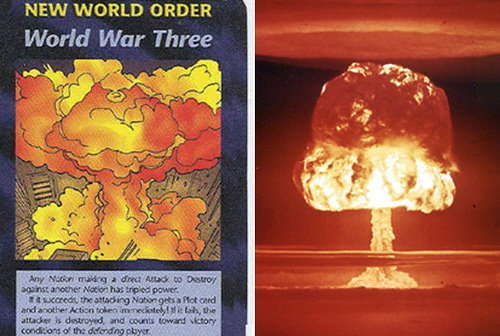 It probably gets even weirder but there’s more than enough to scratch away at your brain for a while there. So what’s the answer to all these coincidences, foreshadowings and omens? 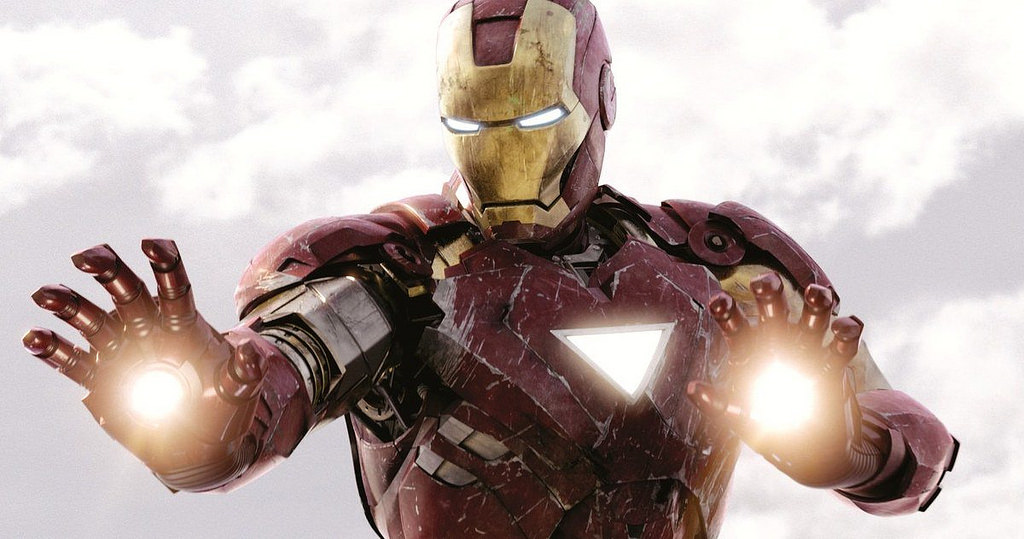 Is the world ruled by an elite caste of Luciferian occultists who saw the future Trump presidency and tried to use predictive programming to prevent it? 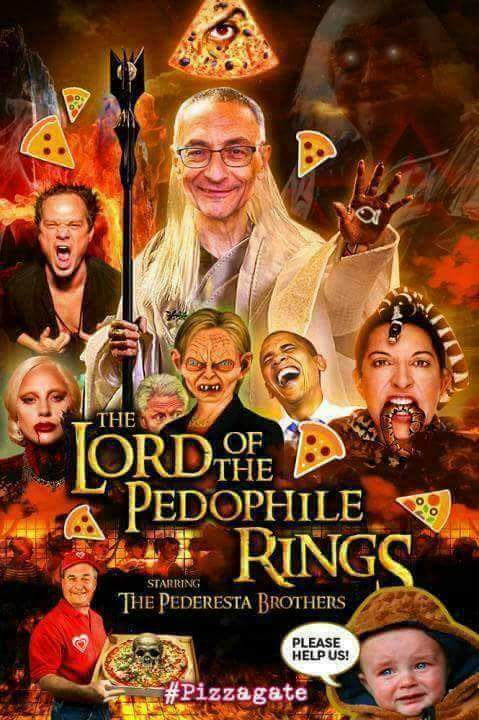 Or is Donald Trump a time traveller? 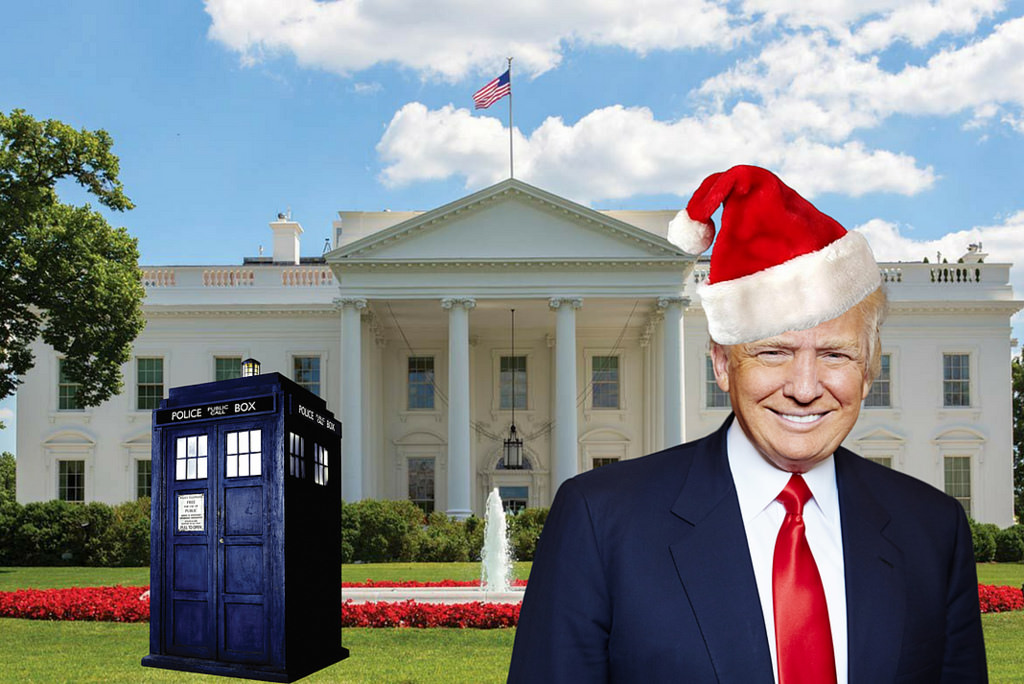