Identity politics is the new black these days it seems. You can’t turn sideways without being confronted by another manifestation of it. You open up the Sydney Morning Herald to check in on the propaganda, and Clementine Ford is screeching at you about how she fears for her safety constantly. In Melbourne, probably one of the safest cities in the world for women. Have you seen Clementine Ford? Does Melbourne not have street lights? It’s all very irrational.

Every Monday night on Q&A the cultural Marxist inquisitors of the cult of diversity come together to find more unconquered areas of white male supremacy to colonise. This ritual is funded by money stolen from you by a government that sees you as ‘problematic’ at best. The white male-hating elite follow this up on Tuesday night with the more softcore manipulation of SBS’s Insight, which uses the marvellous power of groupthink and social conformity to hammer home relentlessly the message that unapologetic white men have no place in 21st century Australia.

SBS even spent an entire week, and much of your stolen tax funds, preaching at us about how racist we are. I guess SBS has to do that, right? If we’re not racist, then we wouldn’t need the SBS anymore at all, would we?

This elite agenda of demographic warfare against Aussie blokes has traction with a significant proportion of the population as well, if the comments under Clementine’s social media posts are anything to go by. There are a lot of angry middle-aged land whales out there, who after dissipating their youth in promiscuity and losing their looks in the process have decided to blame the resulting feelings of ennui on the carousel of alphas they let ride them to nowhere when they were still tight and perky. As Oscar Wilde said, you get the face you deserve at 40. The butt, too, perhaps.

It’s hard to tackle a problem if we don’t have a name for it, and the anti-white male agenda we see day in, day out is one of the biggest challenges our people face. Given that, for the moment, we’re still a majority white country, it’s a real problem. So let’s name it. Albophobia – the fear of whites. The French already coined this term with ‘albophobie’, so there’s a precedent. There, our enemy now has a name to put to that bigoted, hateful, spectacled, toothy face.

Albophobia then will join the ranks of Islamophobia, homophobia, transphobia, sexism, racism and all the other panoply of labels that comprise our postmodern identity politics. We’ve been playing defence for far too long guys, and this is a war in which the technology favours offence. This has led to the parlous state of white men in Australia today.

If you’re a white guy in postmodern Australia, your job is shut up and be taxed while the establishment works overtime to denigrate, demoralise and ultimately replace you. It’s not very dignified, when you think about it.

I know many of you readers will be repulsed at the idea of white men playing identity politics back on the neo-Marxist left. You’ll say it’s beneath us, and we’re becoming as bad as them. I thought so too for a long time. The thing is, by sticking to those principles we’re fighting with two hands tied behind our backs. Our children are only hearing the albophobic versions of history, only watching albophobic narratives on the television and watching their suburbs and streets brown in complexion over time as our morale and self-belief fails. We abort their potential peers and replace them with Chens, Kims and Singhs. They must wonder if we hate them.

There’s no competition for the toxic ideas of the cultural Marxists, and so they keep winning. And by winning, they are getting rid of us. One dead white guy at a time.

In the interests of diversity, we should fight back. For if there are no majority white countries left, how diverse will the world be then? A world of beige homogeneity is no diversity at all. Either we start to play identity politics back, or we’re done for. 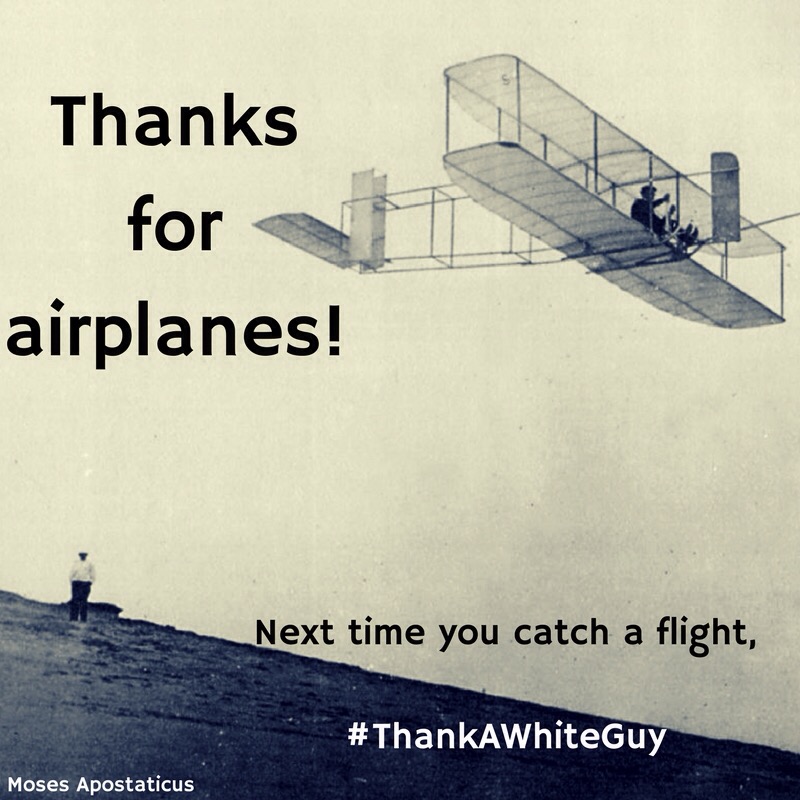 There’s a lot of rich material for us to use to fight back against the albophobes. White men did, after all, create modernity. We invented the toaster, for starters. And the electric kettle. Pretty much anything that runs on electricity, really. We first burned coal to power those appliances, and gave that marvellous magic to an incredulous and astonished world. We laid the first railways, and first built the locomotives to careen along them. The telephone, television, X-ray machine, automatic windows, air-conditioning, dimmable lights, radio, the internet, the thermos, InSinkErator, the diode, fluorescent globes, nylon, UHT milk, ziplock bags, plastics, whiteboards, the refrigerator, the deep freezer, invasive surgery, the washing machine, GPS, the automatic transmission, jet flight, scuba tanks…

The list is quite long, and those are just a fragment of the physical inventions we’ve come up with that have created the material utopia enjoyed by billions around the world. We haven’t mentioned natural rights, logic, the scientific method…

So blacks may now falsely claim that the Pharaohs looked like Denzel Washington and women might complain that it is only patriarchy that has held them back for so long, but we know the truth. If we’re going to play the identity politics game, it’s time to start playing properly. There’s too much at stake for us to keep sitting on the sidelines letting our opponents score goals against us unopposed. We owe it to our sons to do it.

We had hoped that it wouldn’t come to this, but it has. It’s time for white guys to get in the ring and starting playing identity politics back at the race-baiters and gender-haters who see no future for our sons in this land their forefathers colonised, cultivated and civilised.

So let Clementine screech away hysterically like the lunatic she is. Let the Q&A panel deride us for our traditional marriages, moral standards and stubborn belief in two genders. That’s fine. We know we’ll win, because that’s just how we are. After all, we invented pretty much everything, fought two world wars and we will traverse the stars.

After our victory, I pray we will put down these nasty weapons of identity politics and get back to driving civilisation forward. When we do, the other races and the other gender will smile appreciatively and say to us kindly, ‘Thanks for everything, white guys’.

Moses is the author of CIVILIZATIONISM, a freelance writer and an advocate for Traditional Nationalism, a philosophy which seeks to restore realism as the basis for political organisation in Australia. You can find out about the movement at http://www.tradnash.net/, or on Facebook and gab.ai.