Simon Roche, Head of the Office of the HQ of the world’s largest non-state civil defence organization Suidlanders, recently was interviewed by Alex Jones.

Simon Rouche provides an overview of the systemic genocide of White people in South Africa currently being overseen by the African National Congress (the communist party of Nelson Mandela and Joe Slovo) and the emerging Economic Freedom Fighters (a radical Leninist-Stalinist party).

“The statistical likelihood of a White person being murdered by a Black person in South Africa is more than 1200% higher than any Black person in the USA ever stood at being lynched. We are not condoning lynching, we are saying get a sense of perspective.

“It is like a cancer! At the moment it is expressing itself something terrible in South Africa. The rate of rape and murder and what have you is just phenomenal…

“For example, the elderly couple that had boiling water poured over them, or the elderly gentlemen who recently got locked up in his Ford truck and then the truck set on fire and burned to death. The little 4-year-old girl who was raped by three men, survived it, and because she survived (this was proven in the post-mortem autopsy) she was then bundled up in newspaper with gasoline poured over it and then set on fire.

“It is beyond people’s imagination what we are in at the moment.” 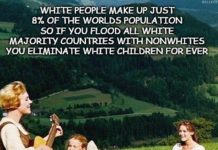 Trump’s Gone – But We Can Stop White Genocide 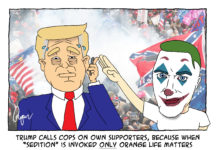