Wow, Antifa are really, really butthurt about me doxxing their kingpin blogger slackbastard on the weekend.

These defamatory and appallingly ugly posters were put up around a campus of the university where I am doing my PhD on Wednesday night this week. Antifa Brisbane have claimed responsibility, and accompanied the poster blitzkrieg with a hysterical post on their Facebook page.

The posters and the post make several false claims that merit a response. It also provides us an insight into just what’s going on in these millennial snowflakes’ heads, and what everyday Australians are up against if we’re going to prevent a Marxist revolution from breaking out in this country.

If you don’t think that could ever happen here, I’d remind you that’s what the Russians thought before 1917. These people may be physically and mentally below average, but they’re well-funded and fanatically devoted to their totalitarian ideology. They’ve also demonstrated in the past what they’re willing to do to XYZ staff, and probably to XYZ readers too.

The coppers weren’t surprised about this when I spoke to them about it, either. They have no love for the cop-haters who vandalise their cars at rallies and demonstrations. They’re fed up with them.

Despite what the pearl-clutching transqueers of Antifa Brisbane think, I am not a member of ‘The Australian Traditional Nationalist’. We stumbled upon a similar name quite by chance, which to me confirms that it’s a philosophy whose time has come. They do good work though.

I don’t deny the Holocaust happened. The arguments I have made are that it has been given an outsized significance in our culture and is used by Jewish lobbies within Western countries and Zionists in Israel to advance their interests against ours. The 20th century was full of massacres, by many races. Pinning the guilt for the Holocaust on all white men is ridiculous. We fought the bloody Nazis. Get over it.

I don’t put up posters and I don’t put up stickers. I certainly don’t travel all the way down to Sydney to do so, as alleged dishonestly by Antifa blog slackbastard.

I’m also not a Nazi, a neo-Nazi or a ‘baby Nazi’. I’ve written about the danger of romanticising national socialism and made fun of it in the past on these pages. I’m against all forms of socialism. I’m not a fascist, either. I’ve been influenced by the ideas of Evola and Spengler, but this doesn’t make me a fascist. I’m a traditionalist. I believe that we took a wrong turn at modernity, and if we don’t change course when the opportunity presents itself Western civilisation as we’ve known it will come to an end.

While I’m not a Nazi though, Antifa are communists.

Phrasing such as ‘There should be no safe harbour for Nazis at a multicultural university…’ should leave you in no doubt about the totalitarian nature of Antifa’s ideology. They openly declare that they believe political violence is necessary against all forms of ‘fascism’.

They’re getting more organised, more militant and more violent, as well. Last month, US security agencies labelled Antifa ‘domestic terrorists’. In July this year Antifa communists turned Hamburg into a warzone during the G20 meetings in the city.

Antifa violence in Berkeley, California over the past year has forced the police there to militarise in response, and Antifa Melbourne’s Facebook response to the Las Vegas shooting made international headlines.

The post was pulled after a social media uproar and other Antifa pages have since denied the legitimacy of Melbourne Antifa, but I don’t believe them. Why did they wait so long to disown that page? They just know they screwed up.

This obsession with violence to achieve a political objective, which is the textbook definition of terrorism, begs the question: Why are Antifa so insecure about their ideas that they must resort to violence?

It’s because they lost the argument a long time ago. After the death camps of Bolshevism, the horrors of Maoism and the killing fields of the Khmer Rouge, communism is morally and ideologically bankrupt. All these people have left is violence.

Despite this, Melbourne University Press recently published ‘Antifa: The Anti-Fascist Handbook’ by former Occupy Wall Street organiser Mark Bray. Why is one of our universities publishing terrorist training manuals, and why the hell did ABC radio give this communist a platform to spread his message of political violence?

Antifa use the language of Western Marxism. They talk about protecting minorities, empowering brown people, blah blah blah. But that’s not what they’re really about. They see milquetoast Western Marxists as too moderate, and too peaceful. They are not interested in using democratic socialism progressively, like has been done in the West for decades.

These people want to kill ‘capitalists’ and bring about a violent revolution. They’re open about it.

It’s like they missed the last 100 years, which they probably did given how little real history students learn in school these days. When challenged about the disastrous 20th century and its mountains of corpses, they’ll just dismiss that as ‘not real communism’.

Stuck in their paleo-Marxist mentality, they see evil ‘capitalism’ everywhere. They are utterly ignorant of economics, history or philosophy. All they see is power, and that they don’t have any. That means someone’s gotta pay.

The extremism of the international socialist left always generates a reaction from the national socialist right. This has been the deadly dialectic of modernity. It is also encouraged by powerful financial interests to further consolidate their control over the peoples of the world.

The oligarchs plan on using the upcoming economic collapse to bring about global tyranny. They’re going to implement a global currency and global government to do it. My goal is to do everything I can to prevent that from happening, so that we can leave our children a country worth living in.

Being ignorant, the totalitarian ‘anarchists’ of Antifa don’t understand any of this. They don’t understand that people like you and I, dear reader, represent a movement. A movement against global tyranny, financial slavery and narcissistic immorality.

Antifa think that the outbreak of nationalist sentiment around us must be being driven by some mastermind, because that’s the reality they live in. They’re control freaks, so they imagine all these alt-right shitlords who are popping up must be centrally coordinated. We’re not. We’ve just all arrived at similar conclusions independently, shared ideas online and then decided to save Western civilisation.

May as well, right?

My own journey was not uncommon. Appalled by cultural Marxism about 10 years ago (which I still didn’t have a name for), I became a libertarian. I went through a goldbug phase and learned about prepping (which I still think are important for what’s coming). I noticed, though, that libertarians have no effective response to globalism. The hyper-individualism of libertarianism leads to degeneracy and community breakdown.

I also spent years delving into the truth movement and paleoconservatism. I then came across neoreaction and suppressed research on race and gender. By then the alt-right was emerging, helped in large part by a speech Hillary gave in August, 2016.

Convinced that if Hillary was elected there would be no help for the world, I started writing articles supportive of Trump for Tucker Carlson’s the Daily Caller in Washington. It’s one of the top three conservative news sites in America. 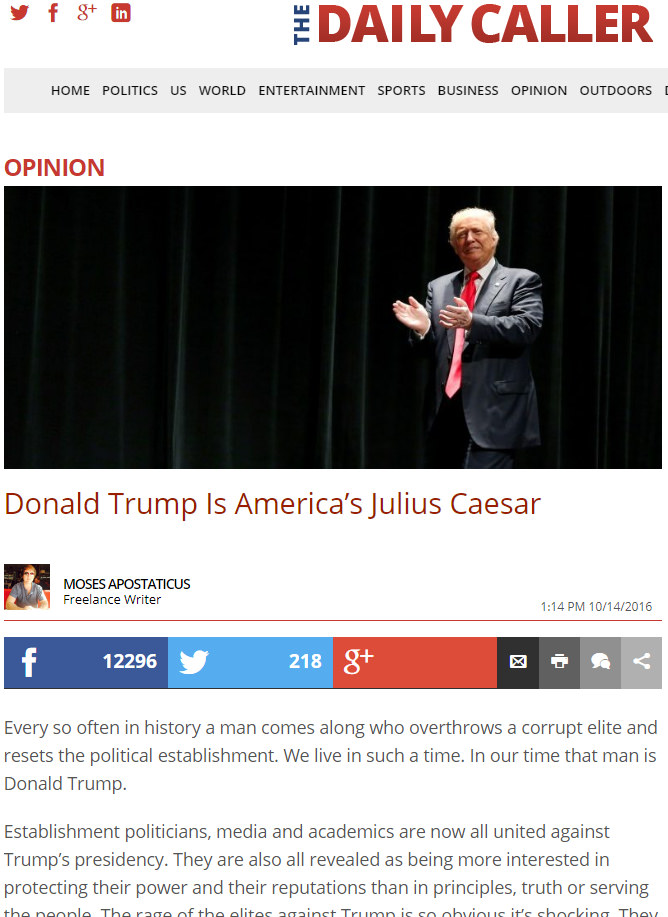 My articles regularly got tens of thousands of readers. My most significant article, however, was one on George Soros. It had over 200,000 readers, and was an expose of the Marxist principles on which Soros’ Open Society Foundations operates. I’d read Soros’ mentor Karl Popper’s book ‘The Open Society and its Enemies’ several times, and I’d seen how Popper purported to be against Marxism but had simply provided a critique of Marx to make his philosophy applicable to liberal democratic societies. 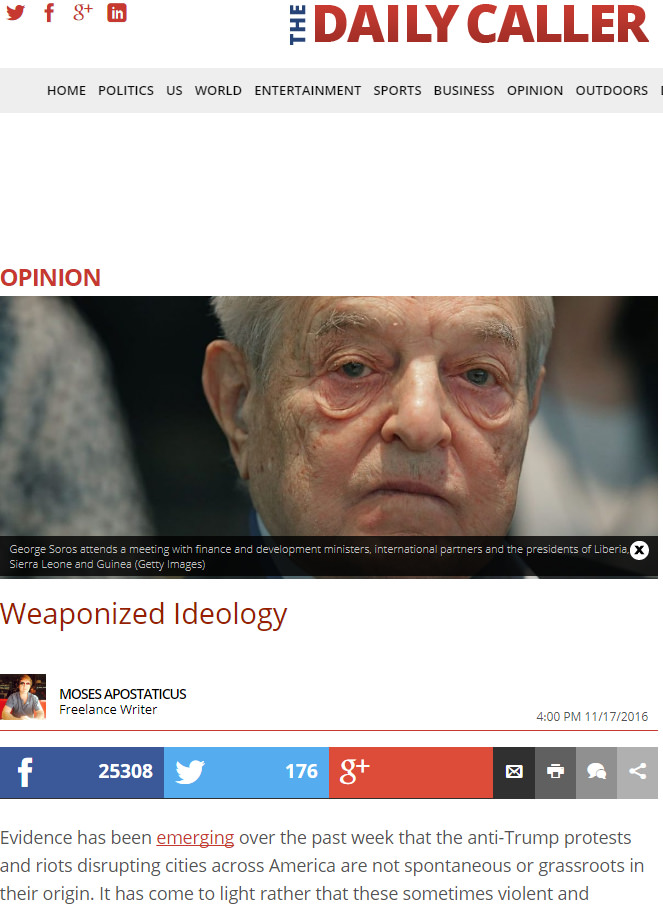 It seems to have rustled jimmies all the way to the top. Six weeks later, Soros himself wrote an op-ed for Project Syndicate defending the ideology of the Open Societies Foundations and lamenting that the ‘open society’ project was in danger. Indeed. 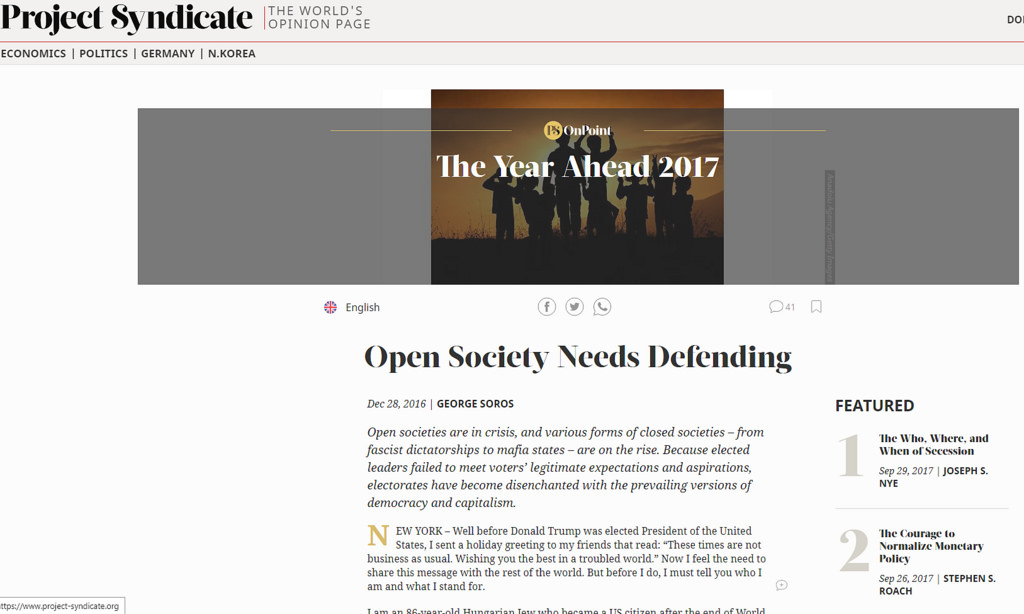 It’s bullshit, though. Soros will fund Antifa and other cultural Marxist and anarchist non-profits in the West while also funding neo-Nazi movements in the Ukraine. He doesn’t give a shit about ideology. For him, it’s all about power and a morbid crusade to destroy Western civilisation. He really seems to have it in for Russia for some reason, too.

The global elite is more than just Soros, however. Once you peel back the curtain, the world becomes much more complex and much more interesting than the bogus 2D narratives spun for the low-info TV normies. Those are shadows on a cave wall.

The elites want global socialism. That’s been the plan for a long time. They manage political movements of the left and the right to achieve it, too. They are obsessed with open borders, multiculturalism and economic feudalism for Western nations in order to bring it about.

That’s why the only weapon strong enough to defeat anti-white globalism is pro-white nationalism. That’s why we must remember who we are. It’s not about hating foreigners. It’s about loving ourselves, and keeping something to pass down to future generations. Such is the right of all sovereign peoples, and it is not ‘racist’ or ‘Nazi’ to say so.

Nationalism in the West isn’t going anywhere. It’s just gotten started. Antifa are going to start finding ‘baby Nazis’ everywhere pretty soon. Young whites are sick of being made guilty for all the sins of history, especially when our ancestors built the greatest civilisation in all of human history. Ours.

And it’s not just one or two graduate students that Antifa are going to have to start postering about. It’s the academics as well. They’re sick of the Marxist capture of higher education. Are they Nazis too?