These are the words which should be used in the upcoming eulogies for John McCain. They won’t be though. It’ll be the usual vomitorious bilge they pump out for someone who served the interests of the globalist financial elite.

Their ABC has already set the tone for their coverage of his descent into eternal damnation:

“United States senator John McCain has brain cancer and is reviewing treatment options that may include a combination of chemotherapy and radiation, his office has announced.

“The six-term Republican senator and former presidential nominee, who is 80, has been recovering at home in Arizona since undergoing a procedure to remove a blood clot from above his left eye…

“In a statement on Twitter, his daughter, Meghan McCain, said: “My love for my father is boundless and like any daughter I cannot and do not wish to be in a world without him. I have faith that those days remain far away.”

“My grandmother, mother, brothers, sister, and I have all endured the shock of the news, and now we live with the anxiety about what comes next.”

Sad face. What about the anxiety endured by the countless grandmothers, mothers, brothers and sisters whose lives he has destroyed in his craven lust for power? No coverage in the ABC for them.

The establishment media has pre-empted any alt-media criticism of Trump. Fake Newsweek journalist Alexander Nazaryan has led the charge:

“Most Americans met Wednesday night’s news that Arizona Senator John McCain was facing a dire diagnosis of brain cancer with shows of respect for the elder statesman and former prisoner of war. But to some on the extreme right, the longtime Republican is a traitor worthy of scorn, presumably because of his willingness to work with Democrats, as well as his criticism of President Donald Trump.”

No, Alex, that’s not why we will spit on his grave. Get some therapy for that neurotic obsession with Trump.

Would you like, dear reader, to guess the ethnicity of Nazaryan? Hint: It kinda rhymes with ‘blowfish’.

Now before you think I’m doing a John Pilger-style ‘he’s a war criminal’ polemic, I’m not just talking about the countless brown people who’ve died from his shilling for global war. Neither am I only talking about the servicemen who have come home in a box from the globalist wars McCain has sold to a gullible American public. Let’s start by having a look at where this career of death-dealing began: the U.S.S. Forrestal.

McCain is the son and grandson of admirals. This got him a gig flying fighter jets during the Vietnam War. On July 29, 1967, McCain was on the deck of the aircraft carrier Forrestal when he decided to be a smart arse and break take-off protocols by doing a ‘wet-start’.

This type of take-off creates a large flame to the rear of the jet, and McCain’s simultaneous arming of his jet’s weapons caused a Zuni rocket to launch across the carrier’s deck and hit other parked planes which themselves were loaded down with munitions. The subsequent massive explosions and fire killed 134 sailors, injured another 161 on board and nearly sank the carrier.

It was covered up, of course, by the false claim that it was an accident. His Navy mates knew the truth, though, and arranged for him to be shot down over North Vietnam as revenge.

When McCain came back to the States in 1973, he expected to return to his former swimsuit model wife and an assured gilded career. His hopes were dashed. His wife, former swimsuit model Carol, had been in a brutal car accident in 1970 which left her physically scarred and crippled. Did war hero McCain knuckle down, remain loyal and demonstrate through character his deserving of high political office?

Of course not. He ditched her almost immediately for a younger model. He got some wealthy backers to pay for her medical care for life, and she’s remained loyal.

John McCain getting a brain tumour does not excuse the establishment media, including our own globalist mouthpiece their ABC, giving him a free pass for his crimes and his moral failings. Instead they gave him a platform recently to shill for World War III against Putin:

“Senator McCain was elected to the Senate from Arizona six times, but twice thwarted in seeking the presidency.

“An upstart presidential bid in 2000 did not last long.

“Eight years later, he fought back from the brink of defeat to win the GOP nomination, only to be overpowered by Mr Obama.

“Senator McCain stuck by the party’s 2016 presidential nominee, Donald Trump, at times seemingly through gritted teeth — until the release a month before the election of a lewd audio in which Mr Trump said he could kiss and grab women.

“Declaring that the breaking point, Senator McCain withdrew his support and said he would write in ‘some good conservative Republican who’s qualified to be president’.”

Give me a break. Anyone who still buys this sort of baseless propaganda is brainwashed, retarded, or both.

Some are born to privilege and ease, and others have lives marred by tragedy and loss. John McCain has had both. Rather than it build character, it has left him twisted not only physically but also spiritually. The man is a hobbling symbol of everything wrong with the decadent West, and in the final analysis he will be remembered as one of the great villains of history.

McCain is not alone in his villainy, of course. The entire US political establishment is run by degenerates, traitors and crooks. It’s a cozy club for those who have served the globalist agenda.

John McCain is an American hero & one of the bravest fighters I've ever known. Cancer doesn't know what it's up against. Give it hell, John.

John McCain is as tough as they come. Thinking of John, Cindy, their wonderful children, & their whole family tonight. 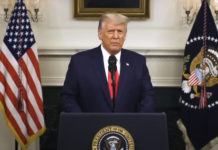