Lately I’ve been having folk expressing unease about my characterisation of a (((certain group of people))). Even some editors have had to unpublish some of my work on this particular subject (which is understandable given the vexatiously litigative nature of certain “anti-Defamation” outfits who embrace 18c of the Racial Discrimination Act).

Ostensibly, my contention is that Jews have been intimately involved in the development of cultural Marxism, as they constituted the majority of Frankfurt school theoreticians as well as many of the leading agitators in “social movements” heavily influenced by their work.

More broadly, I agree with the characterisation put forth by Jewish author Douglas Rushkoff that Judaism is “a corrosive force” towards race, nation and ideologies of the goyim.

To get an understanding of this, I’d recommend watching this film and following up on the information put forth by Kevin McDonald and other featured academics.

Also, consider how prominent Jewish agitators like (((Joe Slovo))) were pivotal in the destruction of Afrikaner governance in South Africa to install communist ANC rule of the newly constituted “Rainbow Nation”.

Consider how the more recent mass migration of non-Whites into Europe, spearheaded by Jewish activists like (((Barbara Spectre))) are decimating our ancestral homelands.

Please understand I am not bothered by anyone’s pejorative references to me as an “anti-Semite”, “racist”, “bigot”, “Nazi” or “White supremacist”. It genuinely doesn’t bother me anymore.

What bothers me is the demographic displacement and dispossession of White Europeans around the globe, and I make no apologies for holding these concerns. 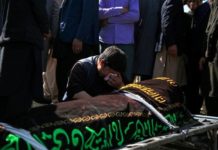