Kosher kippah wearers at Cuckerbook have been vamping up their enforcement of controlled language, by instituting algorithms that block prominent politically incorrect images before being posted.

While it has been standard practice of Cuckerberg and his commie cronies to encourage a rampant unofficial network of informants to report on counter-revolutionary content, now it’s becoming an automated function.

Images like the happy merchant Jew meme or early 1900s advertising for the White Australia Policy have become images that are routinely being purged from Cuckerbook.

Meanwhile, explicitly degenerate material posted by Cuckerberg’s comrades are routinely being given the thumbs up in order to subvert white Western society. 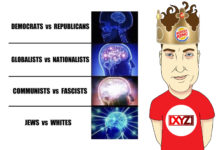