According to Facebook, I’m a purveyor of nudity on social media. Thankfully my wife hasn’t found out. Wouldn’t make for a great Easter long weekend.

The post in question was an article I shared from altright.com dealing with the mainstream media’s silence about Ebba Akerlund, an 11-year-old victim of the recent Stockholm Islamic attack (the one with the truck in the market, if you can’t keep up). The image in question is this one.

When I look at that image, I’m not offended by ‘nudity’. Given that public censorship of nudity is usually related to sexualisation, I find such an accusation by Facebook to be deeply, deeply revolting. Who could possibly look at that image and be thinking anything about nudity?

It is an offensive image, though. It’s offensive because it’s yet another example of a Muslim murdering large numbers of Europeans thanks to the Wahhabist poison funded globally by Saudi Arabia, the destruction of the Middle East by bloodthirsty psychopaths like Obama and Clinton, and the open borders policy of politicians like Angela Merkel, which has brought millions of these jihadis into the heartlands of Europe. That’s what’s offensive, and that’s why Facebook removed it. It’s political censorship.

Facebook say they removed the post because they say it violated their Facebook Community StandardsTM. I doubt these were developed by any actual community. They were much more likely to have been developed by a tiny clique of conformist technocrats in collusion with the apparatchiks of the Deep State. I was notified about this in a message sent to my ‘Support Inbox’. Does that make your skin crawl? If you’re a red-blooded Australian, it should.

All of this was followed up with a passive-aggressive set up pop-ups next time I logged into Facebook telling me that I was sending out ‘spam’ from my account. By ‘spam’, Facebook means ‘real news’. I had to scroll through my recent posts and verify they were sent by me.

The purpose of such an action has nothing to do with spam. It is a classic example of gaslighting – undermining a person’s sense of self by falsely accusing them of doing what the perpetrator is doing to them. It’s abuse-by-projection. In this case, everyday people who have left the control grid of the establishment media are having their beliefs about reality questioned by an establishment that is panicking about the growing rebellion against them. They are accusing us of spreading falsehoods, when that is how they have retained control for decades.

We’re not sitting like passive blobs in front of the television anymore. It used to be so easy to run the global debt and tax plantation. Now the human cattle are starting to walk on hind legs, and the globalists are panicking.

The justification for the totalitarian censorship in the West is based on female moral values of inclusion, diversity, tolerance and not offending anyone, especially those in power, with the truth. It’s creepy, it’s un-Australian and it’s only getting worse.

Orwell wrote that the future would be a boot stamping on a human face, forever. In some parts of the world, that has turned out to be true. In the West, though, we didn’t get Big Brother. We got Big Sister. She doesn’t take 100%; just 60%. She doesn’t send secret police in the middle of the night to take you to a re-education camp. She uses propaganda and cradle-to-the-grave indoctrination to mobilise mobs against any dissenters and shut them down through social dynamics, fear of loss of employment and the power of enforced conformity. She doesn’t use firing squads, because she doesn’t have to. The people have been trained to shoot themselves. It’s an expensive way to run a tyranny, but the dividends have been enormous.

Here in the West, we’re the Inner Party of George Orwell’s ‘1984’. The financial oligarchs have devoted stupendous amounts of resources constructing the control grid that keeps us compliant. In the Third World, the Outer Party, their freedoms are greater but their conditions are worse and they are further removed from the centre of the system. That’s why if humans are ever to be free of this globalist plantation, it must be the men and women of the West who overthrow it.

What guarantor of liberty is the ritual of voting when the media, internet companies, banking system, tax systems, education system, communication networks, intelligence services, politicians and all the apparatus of state are controlled by and for the same small group of oligarchs? Who can escape the Eye of Sauron then?

Moses is the author of ‘Civilizationism: Why the West is Collapsing & How We Can Save It’. His writing also appears on The Daily Caller and Zero Hedge. He blogs at http://mosesapostaticus.com/. 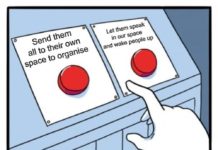 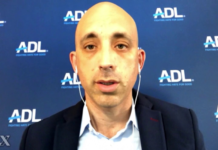