Ask anyone today if they have heard the name James John Hagerman and you will be rewarded with vacant stares and blank expressions, a reaction that is in equal measure predictable and an indictment of our system of education. In an age where political winners and losers are chosen by media sound bites and 140 character thought bubbles, it seems strange that there isn’t greater reverence for Hagerman, who is generally thought to be the author of one of the greatest and most appropriated political put-downs in modern history.

Hagerman, who died in 1909, was an American industrialist from territorial New Mexico, and heavily invested in mining, railroads and an early iteration of corporate farming. Competitors keen to take for themselves the rich rewards of emergent technologies and businesses heavily contested Hagerman’s interests. In the early 1890s Hagerman is said to have been in New York raising finance for his ventures, where he met a competitor who apparently practised the time-honoured strategy of spreading lies about his adversaries. Hagerman apparently said to him:

Much like his businesses, Hagerman’s authorship isn’t itself without controversy and the subject of competing claims; at least one other history attributes the following quote to an unnamed but apparently ‘gifted Kentuckian’ in October 1892, who is reported to have written:

‘If our enemies will stop lying about us we will stop telling the truth about them.’

We will probably never know the true author of the original thought and public utterance, and today perhaps it doesn’t matter. Whether it was Hagerman, or another lost to history, the line is without peer as a crushing put-down by the elegant assertion of the morality of the speaker and the dishonesty of the subject – so much so that it has routinely been appropriated by modern politicians, most of whom were untroubled by the need for any attribution. William Randolph Hurst used the line against Charles Evans Hughes in the 1906 election for the governorship of New York, and US Senator Chauncey Depew used an adaptation when he said:

‘If you will refrain from telling any lies about the Republican Party, I’ll promise not to tell the truth about the Democrats.’

The latter variation was itself appropriated by Adlai Stevenson in the 1952 Presidential election against Grover Cleveland when he said:

‘If you don’t stop lying about me, I’ll start telling the truth about you’

Outside of the US, perhaps the best-known use is by Harold Wilson when contesting his legacy with Margaret Thatcher.

Great lines are hard to wear out, if only because they succinctly state an incontestable truth about life or politics. The relationship between truths and lies in politics is as elemental as it is unsavoury and destructive, and today the line is so indistinct that it is lost to many of us. Not so long ago the conscientious voter might have looked to media to help them distinguish between the blandishments of grasping or owned politicians and the truth, but today the MSM have cast aside any vestiges of the role of impartial and fearless reporters of the facts, preferring instead to shape the political narrative and outcomes to either their preferred brand of politics, or in the service of the vested interests of their paymasters. Today, more people can see it, and the increasing mistrust of the MSM is delivering vastly diminished returns on the substantial investment of concentrated MSM ownership. 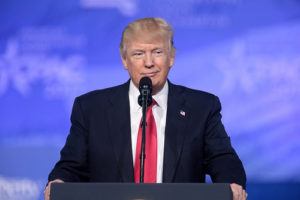 Whatever you think of President Trump and his agenda, he is a significant political disruptor, and his war with the media is exponentially accelerating mistrust of the MSM. Trump’s charges against the MSM are so potent and effective for the simple reason that in many cases they are clearly and obviously accurate. The MSM reporting of Trump’s campaign and White House is so replete with self-evident untruths, hypocrisy and double standards, and an almost hysterical obsession with ill-conceived and ill-researched gotcha moments that are the springboard for the latest in an endless procession of dire predictions of imminent self-destruction or impeachment, that even the most casual observer is starting to question the MSM narrative.

After Trump won the election, the MSM launched into a desperate campaign designed to undermine his legitimacy by asserting that his campaign conspired with or was assisted by the Russians to defeat Clinton. There was no evidence to support the claims then, and today we have the post-investigation testimony of the heads of the FBI and the NSA to a Congressional House Intelligence Committee that there is simply no evidence to support the claims – not that the absence of proof deterred those in the MSM determined to undermine or destroy the Trump presidency.

Contrast that approach to the MSM reaction when Trump tweeted his allegation that his campaign and transition was ‘wire-tapped’ by Obama. Evidence of the claims was now vitally important, and the main line of the MSM attack on Trump was that he had produced no evidence to support such serious claims. Claims of Russian collusion and hacking of a presidential election are no less serious, and evidence is either important and necessary, or it is not; but it isn’t one or the other depending upon which side of the argument you happen to reside.

And contrast the outcomes. As to the Russians, after months of investigation by the media, the FBI, the NSA, and probably by the CIA, there is not one scintilla of actual evidence to support the MSM and DNC claims that Russia colluded with or assisted the Trump campaign to defeat Clinton in the election. As for Trump’s claims of surveillance, earlier this week the Head of the Congressional House Intelligence Committee, Congressman Devin Nunes (R-CA), has announced that he has received material from multiple sources that ‘incidental’ surveillance of the Trump transition team was conducted by the intelligence community. The Congressional House Intelligence Committee is continuing its investigation, and there are now as-yet-unsubstantiated reports that the material implicates the Obama administration in using legitimate surveillance of foreign targets as cover to spy on Trump and his team.

So long ago Hagerman presciently put his finger on the essence of modern US politics; it is now an all-consuming contest between truths and lies, rather than a contest of ideas about which reasonable minds might legitimately differ. And in one of those curious inversions of history, at least for the present, the MSM have taken the role of the liars and a politician is battling them with the truth. The MSM really does need to stop telling lies about President Trump, which would enable him to spend less time telling the truth about them and their now almost comical failings. Not that the trust that the MSM has forfeited in its hysterical reaction to Trump and his presidency is ever likely to be regained, but they could at the least make a start by being less partisan, and applying some basic ethics.