Remember Justine Sacco? She was the one who infamously had life as she knew it destroyed while in transit after Tweeting a joke about Africans and A.I.D.S. For many of us, this was a little like the Pearl Harbour of the Culture War. The moment when social justice warriors truly revealed just how sneaky and mean-spirited they could be. The tactic was simple: hound somebody who has made some kind of P.C. faux pas until they offer a grovelling apology like a stumbling antelope at the rear of the herd, then move in for the kill as soon as weakness is evident. The apology itself would mean nothing in terms of contrition. God forgives, leftists don’t. Almost invariably, it was little more than a Trojan Horse for social justice warriors to breach the perimeter. A towel to be thrown in as a gesture that the offender should be stricken from existence.

Justine Sacco was easily the most memorable example of a very effective tactic of the Regressive Left that punished politically incorrect transgressions with extreme prejudice, and symbolically hung the carcass of said transgressors to rot at the cultural crossroads… an ominous warning to all who would follow.

Eventually a kind of talisman was discovered to ward off these perpetually offended Spiritual Vampires. It was called courage in one’s convictions, and refusing to capitulate. Staring down the mad dog without blinking. Donald Trump was particularly good at it. He staved off the temptation to grovel in apology all the way to the White House and drove them all crazy in the process.

So most of us now realise that if we do perhaps speak out of turn (or in turn, but in a manner that social justice warriors perceive as out of turn), sticking to your guns and refusing to issue the requisite grovelling apology is the best protection against having one’s life summarily destroyed. Unfortunately for the left, this sacred ritual is cemented as part of their doctrine. They must abide by it in the same way that any other religion must abide by their own dogma.

Virtually overnight, they find themselves on ‘the wrong side of history’ after Donald Trump pulled back the curtain to reveal a tiny diminutive Wizard operating the levers of outrage and social justice. The Emperor has well and truly been revealed as having no clothes.

Yet public shaming and the outrage culture remains a crucial foundation of the Cultural Marxist house of cards. Without it, their entire universe falls apart. This is why those on the left suddenly find themselves falling on their swords in an A.T. (After Trump) world. What were incredibly safe politically correct opinions (regardless of their offensive nature or incitement of violence) a little over a week ago, now find themselves well and truly in the politically incorrect camp, due to the fact that the silent majority have turned on the mainstream media, and relegated their fringe discredited left-wing views to Hillary Clinton’s ‘dark corners of the Internet’ where they belong. Much to their horror, the first casualty of this (trans) friendly fire has emerged.

Screenwriter Paul Schrader wrote Taxi Driver, Blue Collar, Rolling Thunder, and a bunch of other great subversive movies. He used to be cool when the establishment actually was legitimately stuffy, overly conservative, and oppressive, and small-l liberals had more genuine dreams and aspirations that didn’t include micro-managing people’s thoughts and lives, and well before they themselves became the stuffy and oppressive establishment.

Schrader began his career creating and empathising with characters who would later be identified as deplorables: Travis Bickle, the angry white loner in Taxi Driver; Major Charles Rane in Rolling Thunder, a put-upon Vietnam veteran victimised by some ‘bad hombres’; the Calvanist businessman Jake Van Dorn, who walks into the belly of the progressive beast in ‘Hardcore’; Zeke in Blue Collar, who, much like someone in Trump’s rust belt heartland, remarks that “the wages are fine, it’s just that everything’s so damn expensive”.

A young Schrader obviously related to these characters, and had affection for them. And I think that it’s almost a certainty that given the vote in 2016, all of these characters would pull the lever for Donald J. Trump without hesitation. Now that Schrader is older, he seems to have drifted more toward globalism and the establishment. His sensibilities now seem more aligned with Senator Palantine than any of his once-beloved deplorabes. An argument could be made that Schrader’s politics never changed, and that Travis Bickle or Zeke would have almost certainly been voting Democrat if it was the mid-seventies. The problem is that his beloved Democrat football team became less recognisable, and he could never bring himself to jettison them and instead seems to have adopted much of their groupthink.

Schrader made a rather silly comment that would have been applauded by social media a week and change ago, and begrudgingly endured by a silent majority yet to find a voice. But what a difference a week makes. In a Freaky-Friday-like situation, he found that more than a few people were calling for his blood rather than showing solidarity. What was a good card-carrying Cultural Marxist to do?

As we already established, Schrader felt forbidden to deny S.J.W. dogma. Many of us may have actually respected him had he stuck to his guns and told these more silly Trump supporters (those who made death threats seemed only about a degree or so of separation from similarly lunatic Regressive leftists) to go f— themselves. But no, following the Cultural Marxist gospel to the letter, the guy that came up with some of the most kicka— screenplays of the seventies showed grovelling contrition as was expected of him by the faith militant: 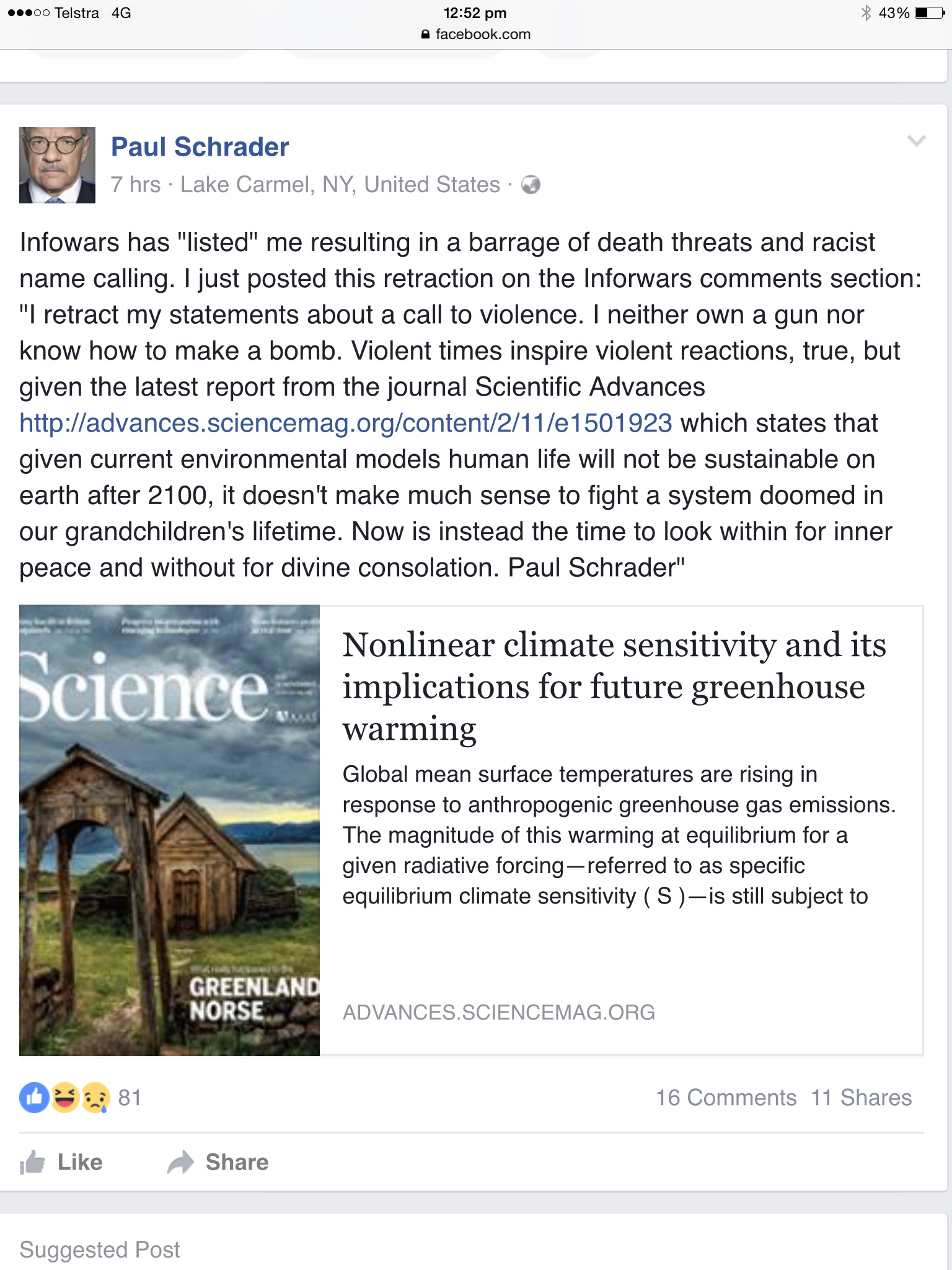 Will it become a thing for those on the left to have their lives destroyed by offering themselves as sacrificial lambs to appease the gods of thought policing? I don’t know that it will, and I hope that it won’t. The last thing we need on our side are people who are easily triggered and offended, regardless of whether they agree with us politically. Conservatives, centrists, libertarians, and others who were initially angry at his comments now seem bemused at his grovelling apology for the most part. And that’s a good thing. It shows those on the other side of the aisle how silly this ambush tactic always was in reality.

Schrader was only exercising his First Amendment rights. Nothing to go Justine Sacco on the guy over. If Schrader is publicly shamed or has his career ruined from this, it discredits everything that we’ve fought for. Freedom from the tyranny of thought policing was entirely the point. Disagree with the guy, find his worldview ridiculous, but listen to what he has to say and respect his right to say it, then present a counter argument. Suppression of free speech is exactly what saw the silent majority stay silent, indicating to all the pollsters that they had bought into the doctrine of Cultural Marxism hook, line, and sinker until they unleashed in the election booth.

The last thing in the world that we want is to not know what our ideological others are thinking. This may well prove to be the main factor that lost the Culture War for the Regressive Left. It was definitely their Little Big Horn in the U.S. We must not stifle their freedom of speech and their freedom of expression. We must not allow them to implement their nonsense carte blanche, but we’d still like to be aware of it.

As the left should have learned last week (yet it still hasn’t sunk in for most of them), silencing your opposition does not silence dissent. It merely fosters unpredictability, and the chance of everything you believe to be a certainty to be turned on its head in a cataclysmic, unpredictable, game-changing event. With that in mind, I look forward to more of Mr. Schrader’s musings, and look forward to seeing more of his films, because he’s made some great stuff and it would be a shame to see him relegated to the same purgatory as Justine Sacco.