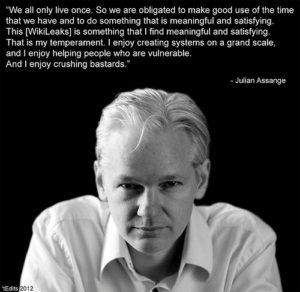 There is a particular courage required to be a nerd in a Western country. Not so much in East Asia, where the nerds get the girls and the marks. But in the Anglo-Celtic West, we still have a residual honour culture left over from our warlike ancestors. Being the kid then who always sticks his hand up in Science to ask the teacher tricky questions that no-one cares about, knowing you’re going to get a wedgie or a headlock at lunch as a result, takes balls.

I have only recently become an admirer of this silver-haired savant. I always found him to be a bit creepy before. I also have never been fond of the confused, self-righteous ideology of the spaghetti-armed Anonymous hacker types who seem to think that any form of power is automatically evil. If they’d spent a bit more time reading history and philosophy and a bit less time crawling around Tor they’d know that the real world is more complex than that. They’d also give up on utopian egalitarian belief systems, which have a body count to rival Islam.

After Assange’s recent dumps of and on the establishment though, I’ve become a fan. Autists of the internet, unite!

Most men, when confronted with a very large armed bully telling them to shut up, shut up. A gang of very large armed bullies will intimidate pretty much anyone into silence. Assange has taken on the entire Deep State establishment, and still he will not shut up. He potentially has more bullets pointed at him than would fit in the entire Ecuadorean embassy, and yet he keeps hanging out the dirty laundry of the crooked establishment for all of us to see.

Hillary even made what some people in the Situation Room thought was a joke when she glibly asked if he could be hit with a drone strike. According to witnesses, it got awkward when people realised the Ice Queen wasn’t joking. Still Assange keeps dumping on her.

Assange came to the notice of establishment authorities in the US when the organisation he heads, WikiLeaks, began publishing leaked materials from gender-confused whistleblower Bradley Manning about US war crimes and abuses of power.

For the past four years Assange has been holed up in the Ecuadorian Embassy in London to avoid extradition to Sweden for what seem to be trumped-up sexual assault charges. Assange has expressed that he would be happy to face the charges in Sweden, except that this would mean almost certain extradition to the United States where Hillary would probably either eat him whole or take him to her underground lair where not even the NSA could hear his screams.

For four years, Assange has been in a Mexican standoff against the most powerful people in the world with his middle finger raised firmly in the air. He is now leaking emails from Hillary’s crooked cabal revealing their dark machinations against the American people, right during the lead-up to the presidential election on November 8.

All those childhood wedgies at the many schools his mother dragged him through seem to have made him bully-proof.

Like many of the most eccentric Australians – I’m thinking Steve Irwin, Pauline Hanson, Joe Bjelke-Peterson, Clive Palmer – Assange is from Queensland. There must be something in the water up here. Or the gene pool.

Raised by a nomadic single mother strongly influenced by the hippie moronity of the 70’s, Assange had an eclectic childhood. Not to get too pop-psychology on him, but you could speculate that his problems with authority come from the lack of a stable father-figure during his childhood. Perhaps attending over thirty different schools created a reflexive anti-establishment mindset? Funny how early experiences shape a man.

By the 90’s Assange was well-established in the emerging hacker community in Australia, and had built up an impressive record of achievements. After founding WikiLeaks in 2006 and exposing cover-ups by the US military under Bush and various regimes around the world, Assange received adulations from such prestigious establishment mouthpieces as Time magazine and Le Monde. He also signed a lucrative book deal.

Assange’s anti-authoritarian activities made him a darling of the left during the 2000’s when conservative governments were his targets in Australia and America. Now that Assange has exposed the crimes, corruption and cronyism of the Obama-Clinton nexus though, he’s Public Enemy No.1 in the leftist establishment media.

So now it’s back to getting wedgies again. So fickle and unpredictable are the tides of popularity for the nerds who can just never understand them.

Very few people have a significant impact on world history, and it’s become far too common for scribblers like me to claim that someone has. But I’m going to. In my view Trump’s candidacy would not have the momentum that it does were it not for WikiLeaks.

Trump now has become more than just a presidential candidate. It feels to many of us now as if he’s leading a revolution against the entire American establishment on behalf of middle America. Along with James O’Keefe’s Project Veritas videos, the constant revelations by WikiLeaks of the venal corruption and blatant dishonesty of Clinton and her cronies has been the critical factor in turning Trump into a symbol of popular resistance.

More than any other person, Assange has turned middle American normies into anti-government tinfoil hatters. The long-term consequences of this will be enormous. Despite what our breathtakingly arrogant rulers believe, they govern by our consent. Popular faith in our democratic systems has now been irrevocably lost. What this portends for the future is anyone’s guess.

Julian Assange truly has changed world history significantly. This is astonishing for a misfit kid from Townsville raised in a New Age cult. Let the leftist statist control freaks and social engineers have their conformist Australians of the Year. Hero of the nerds Julian Assange may well one day be considered the Australian of the Century. 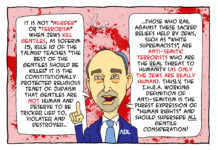