Hillary Clinton had a bad slip last week. No, not when she was suddenly unable to walk at the 9/11 memorial ceremony, and had to be carried to a waiting van and rushed to Chelsea’s New York apartment because of ‘pneumonia’. The slip I am referring to was at a high-end LGBT fundraising event, when she referred to a quarter of Americans as a ‘basket of deplorables’.

Hillary has since apologised and retracted her comment, but it’s too late. The damage has been done. 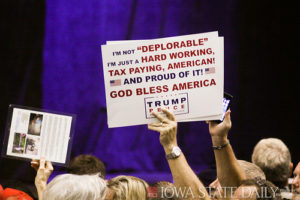 What makes this comment a gaffe for the ages is what it reveals about how the establishment operates. Ten years ago, a comment like that would have served its intended purpose: rallied the Democrat base, outgrouped Trump supporters as ignorant bigots, racists, etc. and served to reaffirm that Cultural Marxists hold the moral high ground. It would have fitted the leftist narrative that the steady march of socialism is the ‘right side of history’, to quote Obama. In the current year, however, it didn’t work. Instead it has backfired badly for Hillary.

What has changed over the last few decades, especially since the spread of the internet, has been a growing bifurcation in society between those who believe the establishment’s version of reality and those who don’t. This widening split always occurs just prior to revolutionary periods such as in Weimar Germany or late Czarist Russia, and before the American and French Revolutions. It is also one of the reasons why I think we’re headed into another revolutionary period now.

Even just a few years ago, the establishment controlled the information that the masses relied on to provide them with their framework for reality. If you had walked down the eerie, silent streets of suburban Australia at night, you would have seen the same lights flashing on the living room walls in the houses you passed. On Monday mornings in the offices, shops and factories, people were talking about what they’d seen on 60 Minutes or perhaps Hey Hey It’s Saturday. There was cultural consensus, mediated by information channels which were centrally co-ordinated. This enabled the ruling elite to maintain tight control on what was considered acceptable speech and what ideas were considered respectable. It also gave media moguls significant clout.

In recent years this consensus has been increasingly breaking down, largely due to alternative information sources via the internet. There is a growing number of people who are not only not absorbing their reality from the elite, they are actively seeking to push against it and discredit it. A rising minority of people in society today believe that much of our reality, including our political process, is stage-managed for propaganda purposes. For them, politics is a puppet show, and democracy is a pantomime performed for our amusement, distraction and oppression. The real power is behind the scenes, directing the show.

As now a critical mass of people have realised this, the scripted lines and smoke machines of distraction don’t have their intended effect any more. They serve to reinforce the phoniness of politics in the minds of these intellectual dissidents. This is death for the establishment. The more Hillary tries to assert that the reality she represents is normal and that those who disagree are subhumans, the more she brings attention to the alternative media and feeds the anti-establishment backlash. It’s now too big to ignore, but any attention she gives it is oxygen for the movement. For us free-thinking dissenters, watching her defenders struggle with this paradox is the best free entertainment around.

Most people in the alternative media and the alternative right can point to precisely when a sense of cognitive dissonance occurred, which led to deeper and deeper questioning of the official reality put forth by the newsmedia. This questioning, once begun, led them to finally stop believing the official narratives altogether. It can be quite an alienating and disturbing experience, especially if friends and family are diehard normies who defend the status quo. For me, the Global Financial Crisis and Obama’s refusal to jail any of the bankers involved was the key turning point. There was no way I could keep believing Obama’s rhetoric any more. The curtain of power was split, and I’d had a peek inside. What I saw behind the curtain revolted me.

This break with the reality put forward by the propaganda machine that supports our current elites has been gaining steam in the minds of men and women across the developed world. Interestingly enough, in my travels throughout the Third World, I’ve found the people there are pretty much born red-pilled. In the Middle East they believe all sorts of wild conspiracy theories, but they still make more sense than the BBC. They are the Outer Party, the proles, so the oligarchs don’t bother with programming them. It’s the citizens of the First World who must be kept compliant and obedient in the global debt farm. Unfortunately for the power elite, we cattle are throwing off our blinkers, thinking for ourselves and comparing notes. This has people like Hillary, and those who fund her, freaking out.

Conspiracy theories emerge in direct proportion to the credibility gap between what the propaganda is saying and people’s lived experiences. They are a useful metric for the level of corruption in a country.

As this alternative culture has grown, it has now led to a dynamic in which there are two categories of citizens. The majority of people still seem to be believers in the propaganda. They still take their talking points from the news. They are still absorbed in the left-right narratives of the establishment media, and this provides them with a measure of comfort. They know they can go to the barber shop or the book club, bring up a talking point they got from Fox News or the ABC, and they’ll be able to have a safe and easy conversation. They see themselves as respectable and normal. They are still comfortable watching the puppet show, thank you very much.

They are being made less comfortable, however, by the growing number of freaky weirdos around them who are walking out of the theatre. These are the people who don’t take their talking points from the news anymore; they do their own research and find their news and their views independently. They are as likely to watch a YouTube video about the Syrian conflict as the BBC, and they’ll judge each according to the merits of the information presented rather than the prestige of the outlet. Each has developed their own independent framework for what they think is happening in the world, and they evaluate new information in light of that framework. They are, dare I say, likely to trust the XYZ more than the ABC because they know the handsome devils running the XYZ aren’t in it for the power or the money. Yet.

These are the people Hillary was referring to as ‘deplorables’. The trouble for Hillary though, and the normies who still don’t think she’s a severely ill sociopath with a suspiciously high body count, is that these thought criminals sound smarter and speak with more authority than the propaganda outlets.

Journalists and thought leaders for the establishment today keep their jobs because of their skill and willingness to speak power to truth. Thought leaders in the alternative media are seeing exponential growth in their audiences because they are doing what the media is supposed to do – speaking truth to power. This is being aided by the ubiquity of smartphones and internet access. Rather than the rulers recording and studying the ruled, it has now just as often become the other way around. The recent video of Hillary’s legs giving way on September 11 is a case in point.

The reason I am arguing that Hillary’s demise represents the downfall of the entire establishment in the long run is that the establishment is all-in for Hillary. In the past, if a Presidential candidate turned out to be a dud then it didn’t matter; the oligarchs always fund both sides. The puppets only pretend to fight, stirring up their side of the audience with their scripted talking points. The rhetoric may be different, and I’m sure there are fissures and tussles within the oligarchy behind the scenes, but for decades now the policies of the left and the right have been largely indistinguishable. The differences have been largely superficial and symbolic, and the deep state establishment has continued its machinations unimpeded.

In this election, however, the populist insurgence of Trump has forced the establishment into the boat together. Trump is a rogue; no-one owns him it seems. Actually, Trump is an oligarch himself who’s jumped onto the stage and grabbed the mic. The fury of the elites backstage is palpable. They’re all-in for Clinton: the Democrats, the establishment Republicans, the academic-media-entertainment propaganda complex. All have pushed their chips to the centre for Clinton. The exposure of her corruption and poor physical condition, and her outrageous dishonesty in response to it, is pushing the entire establishment into the sea. There will be no fall guy, no patsy this time. They’re all going down.

It’s as though Trump has appeared right at the moment when the lights are being switched on in the theatre and the audience is realising that what they thought was reality was just a sham. They’ve been duped all this time. Clinton blames Trump’s rhetoric for the ugly mood in America during this election. It’s not true. Trump isn’t creating this wave of discontent; he’s riding it. As growing numbers of people leave the propaganda bubble and jump into the basket of deplorables, there’s a growing sense that the future is ours. It turns out that it is Hillary, not us, who is on the wrong side of history.

In many ways, Trump reminds me of Julius Caesar. By the time of the Late Republic in Rome, the urban masses of the empire were sick of the corruption and cronyism of the Senatorial elite. The greed and rapacity of the oligarchy had become plainly evident for all to see. Like Trump, Caesar was an ambitious and talented aristocrat himself who used his popularity with the mob to overturn the oligarchic system. He also ended the Republic. If Trump’s trajectory follows that of Caesar and he is elected President to do as he wishes, then he should beware the Ides of March. De-fanged oligarchs have short knives and long memories.