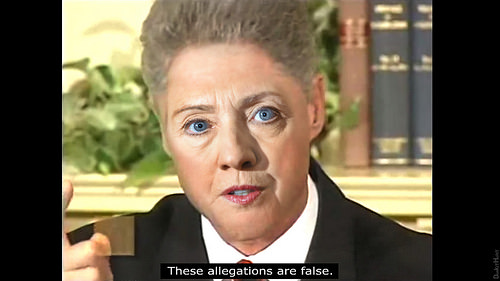 As journalist Peter Schweizer detailed in his compelling book Clinton Cash, The Clinton Foundation is a charitable organisation that essentially pays lip service with minor contributions to global charities, while the lions share goes to the Clintons themselves (and their inner circle) to facilitate their lavish lifestyle, and most recently to a war chest for Hillary’s Presidential run.

It should be noted that none of the allegations raised by Schweizer in his book or the subsequent documentary film of the same name have been disputed or challenged in any way either publicly, or privately by the Clinton camp, so we can only assume that Clinton Cash is accurate, or at least accurate enough to negate legal action.

Clinton Cash was first published in 2015. It was a revelation of corruption in the halls of the highest office in the United States of America. Schweizer alleges that the foundation is a glorified wealth accumulation racket under the guise of charity, and question marks surrounding the foundation were common knowledge for any potential benefactors who knew how to Google.

So why then did our government feel compelled (and why was it even justified or necessary?) to donate between $10 million and $25 million of taxpayers’ money to a questionable foundation, as a lump sum, sometime between 1997 and 2015? (Editor’s note: an article from Greg Sheridan in The Australian from 20/2/16 suggests it could be as high as $75 million over the course of a decade).  Of even more concern, why did the Australian taxpayer contribute a further $10 and $25 million in the first quarter of 2016, by which time the Clinton Foundation was well and truly setting off alarm bells and raising serious questions about whether it had any kind of legitimacy? 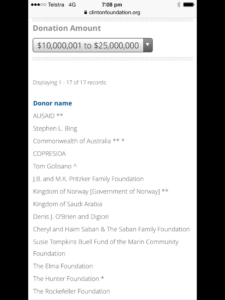 You can see both contributions in this screenshot. The first is listed as AUSAID, but no date is given. The other is listed as Commonwealth of Australia, and was banked by the Clintons in early 2016, coincidentally when an expensive Clinton Presidential campaign requiring some serious cash flow to sustain it was just heating up. Both contributions are vaguely identified as ‘Government Grants’.

AUSAID is of course Australia’s foreign aid programme, as administered by the Department of Foreign Affairs and Trade. A highly capable organisation that helped coordinate the 2004 Tsunami relief effort, yet inexplicably needs a go-between in the Clinton Foundation to distribute (to use the term loosely) between $10 million and $25 million in foreign aid. When did DFAT become so unsure of its ability? It makes absolutely no sense. The question needs asking, did any of that money make it beyond the Clinton Foundation’s ‘administrative fees’?

The early 2016 donation of a similar amount is even more vaguely listed as ‘Commonwealth of Australia’. Such a vague descriptor suggests that it may not have even been costed and charged to a particular department, which makes it all the more suspicious. It could have come from Education, Defence, Welfare, the National Broadband Network… virtually anywhere. Taxpayers have a right to know where these millions came from, and a justification given for it being handed over essentially as a gift to the Clinton dynasty for no particular reason. Again, why are we outsourcing foreign aid when we have a perfectly capable agency to do such things, even if the money hypothetically did go to foreign aid?

The timing is also concerning. Hillary was facing a challenge for the nomination and the Presidency from unexpected quarters. Bernie Sanders and Donald Trump had defied all odds to become legitimate threats. A bigger campaign budget was needed to starve out Sanders in the interim, and Trump at a later date.

Given what we learned from Clinton Cash, is it possible that Australian taxpayers are unknowingly influencing the outcome of the democratic process of one of our biggest allies, by providing millions in campaign funding for the Turnbull government’s preferred leader of the free world?

We now know that little of the money that flows into the Clinton Foundation flows onto those most in need. So any way you look at it, the Clinton dynasty have profited off the back of oblivious Australian taxpayers.

Taxpayers should be angry. They should be outraged. They should be demanding answers to some very disconcerting questions. Why are our tax dollars being used to subsidise the lavish lifestyle and political aspirations of Hillary and Bill? What exactly did we get for our $10 to $50 million contribution? Who is responsible, and how did they benefit?

Australians should be outraged at the fact that they helped pay for Chelsea Clinton’s recently purchased $10 million city-block sized apartment in Manhattan, at a time when many Australian taxpayers are unlikely to ever own even the most modest of homes.

The 2016 donation is most concerning, and indicates that the Australian Government has knowingly influenced the democratic election of a close ally with financial support to a Presidential Candidate, presumably to ensure that the TPP isn’t scrapped under a Trump presidency.

It’s most disturbing that our elected representatives can be as easily bought by the Clintons as two-bit tin-pot dictators with appalling human rights records in third world countries. Perhaps a Royal Commission is in order.

Eh?nonymous was a thoroughly repellent unemployed social justice warrior until a one in a million glitch in his Facebook account affected the algorithms in his news feed, omitting posts from his much loved left leaning Huffington Post and I F**king Love Science, and inexplicably replacing them with centrist and conservative newsfeed items that slowly dragged him kicking and screaming into the light beyond the safe space that Mr. Zuckerberg had so carefully constructed for him. It’s a long road to recovery, but every Mark Steyn share he sees in his newsfeed is like another day clean from social justice addiction.