Regularly the XYZ attracts Leftist trolls who contend that the “ABC isn’t inherently left-wing”, to which I often advise they seek psychiatric assistance for their clinically delusional beliefs. While this is a common condition amongst the average offended cosmopolitan trendy, it appears career manipulators at the ABC are beginning to believe their own lies.

In a revealing episode of Q&A recently, Tony Jones ends the program by shyly commenting on Mark Steyn’s response to the program’s audience applauding the prospect of America falling to Socialism:

Mark Steyn: “I give up Tony! No, I’ve got my taxi to the airport after that,”

While admittedly Jones’s delivery does sound as feeble as Sarah Hanson-Young’s credibility as a public official, we here at The XYZ are concerned about the host’s grip on reality.

Next Jones will be telling us that the recent “Australian of the Year” recipients are just wonderful and that Stan Grant should be Prime Minister. Meanwhile those of us who are aware of the ABC bias sigh at the fact that hundreds of millions of tax-payer dollars fund this Left-wing propaganda mill. 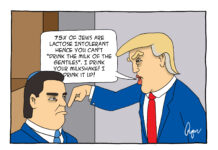