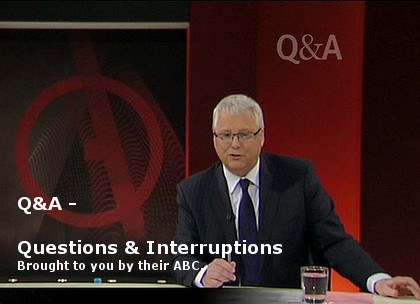 An editorial review, commissioned by the board of the ABC and headed up by Ray Martin has found that the ABC’s program Q&A is “not biased.”

This ‘finding’ will come as no surprise to both fans and critics of the national broadcaster.

The report acknowledged “The most commonly expressed criticism is that the program lacks impartiality and maintains a left wing anti-Coalition bias,” they write.

However, “We believe, after close analysis, this general impression is not substantiated.”

The Age today reported that the review acknowledged that the program should include more conservative-leaning overseas guests, while also arguing that Q&A should also have more local Green and independent politicians on its panels. Doh!

The problem with Q&A is that the panel is invariably stacked with a centre left panelist, a moderate left panelist, a far left panelist and only a token conservative or libertarian. The token conservative or libertarian is then continually interrupted throughout the show by the other panelists and host, Tony Jones. The real debate isn’t whether there is a bias against the Coalition in favour of the Labor party. The real debate, and issue, is that there is a clear left and so called ‘progressive’ bias that runs well beyond the ALP.

Ray Martin who headed up the review was quite comfortable to dismiss any bias on Q&A before he had even completed the investigation.

Though all is not lost. Ray Martin’s review found that “the representation and participation of females on Q&A panels was significantly below that of their male counterparts.”

Just wait for the gender quotas to be introduced in Q&A. Clearly, gender balance is more of a concern than political balance for a program purportedly about political debate.

Whatever the outcome of the Q&A review, your XYZ is here, steadfast in our commitment to restore the balance to Australia’s national broadcasting!