United States President Barack Obama publicly stated that “No challenge poses a greater threat to our future and future generations than a change in climate,” (which reflects the sentiments expressed by former Vice-President Al Gore last week that “This is the tipping point year for action on climate,”). This of coarse leaves folk like myself wondering why aren’t we cranking up investment in nuclear energy already. 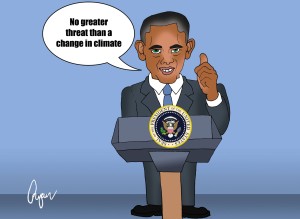 under Section 62 of the Clean Energy Finance Corporation (CEFC) Act investment in nuclear technology and nuclear energy are prohibited. Al Gore admits that new generation Nuclear reactors (like the Integral Fast Reactor) “may yet play a significant role in the world’s energy future” (even though the administration he served in shut down work on the very same reactor in 1994).

Even closer to home we’ve had environmental scientists like Professor Tim Flannery admit “I can’t see an alternative to nuclear power, at least as part of that generation of base load”. The fact that Australia has 31% of the world total supply of Uranium (largest known resources globally) and has huge reserves of thorium I’d say it is insane to be closing ourselves off from the opportunities of nuclear innovation. While the “progressive” Left want to take swings at Prime Minister Tony Abbott for pointing out the flaws of invasive intermittent energy (like wind turbines), these same progressives take swings at the PM for supporting nuclear energy.

In 2010 Tony Abbott, then in opposition, had stated that nuclear power would be the “only realistic way” for Australia to cut its carbon emissions (because I don’t see too many rational people prepared to go back to subsistence living and depopulation strategies). For those unfamiliar with the arguments regarding nuclear I’d suggest people have a look at these two brilliant documentary productions by Gordon McDowell, that contrast the benefits of nuclear energy in relation to other energy sources:

Until carbon free nuclear energy is afforded legal opportunity for investment in Australia we will remain at a technological and scientific disadvantage that will prove adverse to our nation’s infrastructure in the long run.