Greens proclaim their policies to be “humane, compassionate and practical”, but are they? 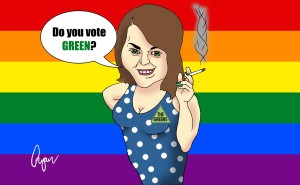 t paying barrackers as a systemic hate crime against Aborigines, and yet the Greens work tirelessly to convince indigenous Australians to opt for energy sources which cater towards subsistence living.

The Greens claim to live by the “principle of nonviolence” and a “nuclear-free world” and yet we’ve had an elected Greens candidate fire a rocket launcher at a nuclear power plant.

The Greens label multiracial rallies that denounce Islamic extremism as “racist” and yet an elected Greens senator attends a Hamas rally where participants hold signs stating that “JEWS HAVEN”T LEARN THEY NEEDS MORE THAN BEFORE” (with a picture of a Nazi Flag incorporated into it’s design).

The Greens say they seek “peace” however they believe this can only be achieved by reducing the world’s population to a “sustainable” level. While some may think the Greens mean this in a gradual sense, one is left to question why they’d seek to ban genetically modified crops (which are higher yielding and resistant to diseases) in assisting to feed the approximate 7.3 billion people on the planet at present?

The Greens wish to redefine the Marriage Act to include LGBT partners. Overseas this has been deemed incompatible by civil liberties organizations, who are now seeking to repeal religious freedom laws (so people can sue churches, individual ministers, priests, privately owned bakeries, photography businesses, catering firms and entertainers who deny services due to an opposing religious conviction pertaining to marriage).

The Greens want to lower the voting age to 16, assumedly because they realize most people who have been around long enough to size up their grim agenda aren’t willing to be perpetual “suckers” (as P. T. Barnum would say) for utopian promises.

The question is, how many are sucked in at the moment?