Today I was reading that The Village Inn (a trendy inner suburb pub in Paddington, Sydney) was shutting its doors to prospective patrons wearing hi-vis work gear.

Frankly I doubt too many tradies would want to be drinking at an establishment where the beer is over-priced and the sought after demographic by the owners are the smug limp wristed variety.

At the end of the day business owners should have the right to refuse service to whoever they want, as they’re the ones wearing the risk. 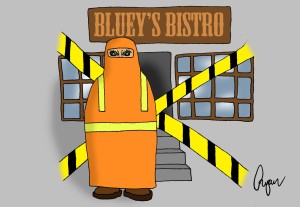 However this ban raises the broader question of what are acceptable garments in the public space.

On one end of the spectrum we annually see the LGBT variety dancing down the streets of Sydney barely dressed at all, on the other we have fanatical cultists covered head to toe walking the streets on a daily basis.