Agriculture, without question, is one of those virtuous works that have helped shape Australia. Australians’ right to farm is an absolute necessity, because without food we are dead.

In my home-state of Victoria we have 25% of the nation’s farms. As the Victorian Farmers Federation highlighted back in February, “they attract neither government export subsidies nor tariff support”. Despite farming on only 3% of Australia’s available agricultural land, Victorian farmers produce 30% of the nation’s agricultural product.

I support the position that no civilisation in history has survived long after it sacrifices the significance of its agricultural production base and its economic viability. As nuclear and aerospace engineer Kirk Sorensen has stated “Human beings have had slaves for thousands of thousands of years, and when we learnt how to make carbon our slave instead of other human beings we started to be able to learn how to be civilized people.”

Hence we have come to see another virtuous work in energy innovation and development. 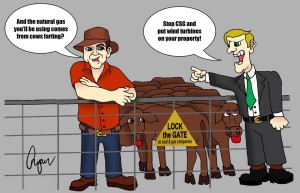 Last time I checked 80% of Australians live in metropolitan areas, leaving less than 20% of Australians to live and work amongst the majority of the vast Australian landscape.
When I see Green groups rallying alongside Australian farmers to stop coal seam gas (CSG) fracking operations, I am critical when they in turn try to convince farmers to invest in “renewables” on their property. Even if we dismiss the insufficient and intermittent nature of wind and solar in addressing base-load energy requirements, these Green groups are failing to mention to what degree renewables are invasive.

Not only do they take up heaps more land than other low carbon energy sources, (such as nuclear, which is a solution to base load energy generation) but these “renewables” go hand in hand with natural gas in its roll out (CSG is natural gas).